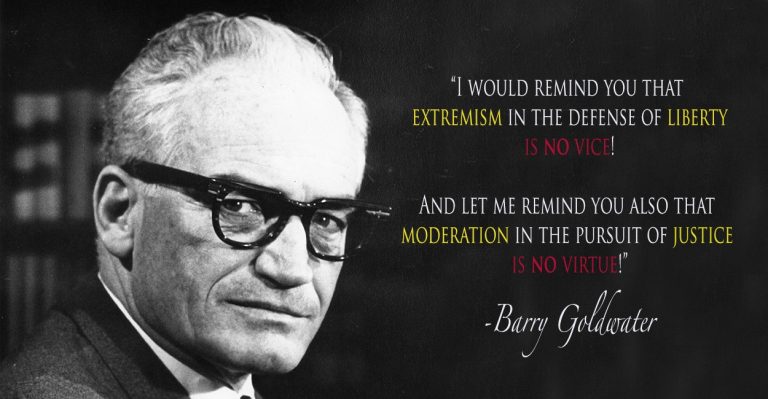 “Tolerance will reach such a level that intelligent people will be banned from thinking so as not to offend the imbeciles.” Unknown, often attributed to Dostoevsky

Senator Barry Goldwater was one of the original conservatives to buck the Republican Party establishment. As a result, many of the establishment Republicans from the Northeast refused to endorse him in the 1964 Presidential election. They thought he was too extreme in his views. When he ran for the Republican Presidential nomination in 1964, the attacks from the liberal/moderate wing of the party aided the Democrats in labelling Goldwater as a radical, who could get the US into a nuclear war.

The Senator knew that this would be the Democrats main vehicle of attack, so he confronted it head on in his acceptance speech at the Republican National Convention. In his address, Goldwater said,  “I would remind you that extremism in the defense of liberty is no vice! And let me remind you also that moderation in the pursuit of justice is no virtue!” The eloquent truth of these words did not help Goldwater overcome the vitriolic attacks by President Johnson and the RINO Republicans of that day. He lost the election by a landslide. Yet Goldwater courageously never backed down from those words or the conservative principles that gave birth to them. They paved the path for the Reagan revolution in 1980.

Every left leaning, mainstream media hypocrite keeps crowing about the need for tolerance, while “cancelling” all those with opposing views. Those of us who used to be called the silent majority, need to start vociferously and publicly expressing our intolerance of every half-wit woke policy. We must not let an infinitesimal, lunatic fringe group dictate public and cultural policies. We must confront them on every platform.

These leftist radicals need to be confronted in every media. Letters to the editors, responses on Facebook, Twitter, YouTube and every other public forum. When shamed about not following the science on the “crisis of climate change”, point out that the US has the lowest carbon emissions of any developed country in the world, and imposing the Paris accord restrictions on us will do little to lower the world carbon footprint. The reason is China and India won’t have to follow those self imposed restrictions for years, if ever. They should also be advised what simpletons they are when they want to make public policy based on the rantings of a spoiled, indoctrinated Swedish teenager.

When one of the transgenderistas demands that some unstable individuals be referred to by the pronouns that they prefer, even though those pronouns are contrary to their biological sex, we don’t have to play that game. We need to advise them that we are not buying into their psychosis that will prostitute and confuse the English language. It should be pointed out to the wokesters, that it is contrary to the science of biology, that there are as many as 56 or 72 sexes.

Those school officials, teachers, principals, and librarians who promote drag queen readings, fashion shows and other events where children are present, need to be fired. If possible, these so-called educational leaders need to be prosecuted for child endangering and/or pedophilia. So should businesses that promote such events where children are encouraged to attend. Such businesses should be boycotted by people and families that want to protect kids.

Critical Race Theory and similar socialist theories, need to be taken out of all schools. It is divisive. It teaches that one race oppresses the other races. The lessons it teaches bring out all of the negatives of this country’s White race and none of the positive and corrective actions taken. It makes every other race “victims” and generates racial animosity. Other woke educational theories, like “Three and Then Me” mathematics should be eliminated for our schools’ curricula. Parents and taxpayers should insist that our educators teach the basics and not “social justice”. Morality is best taught by parents, families and religious organizations. It is so important for parents, grandparents and taxpayers to study school board candidates and vote in these elections.

The woke progressives continually whine about defunding the police, prison overpopulation, racial inequity, “systemic racism” in the criminal justice arena and lowering or eliminating criminal penalties. All rational people have to do is point out the astronomical rise in crime in the leftist jurisdictions that have done these things, with the help of the District Attorneys who hold these views. The more criminals who are in prison and jail, the fewer crimes are committed. That is an incontrovertible fact.

To paraphrase Barry Goldwater: Intolerance in opposition to idiotic policies is no vice. Tolerance of antisocial, moronic ideas is no virtue.

7 thoughts on “Opinion: Time For A Little Intolerance – Buz Williams”