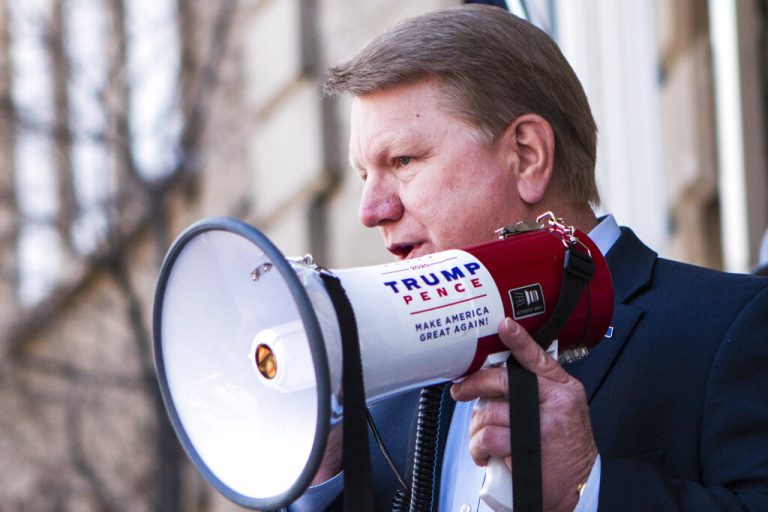 Nevada Republican Jim Marchant insisted there hadn’t been a legitimate election in his state in more than a decade. All of Nevada’s election winners since 2006, he said on a recent podcast, were “installed by the deep-state cabal.”

But when Marchant won the Republican nomination for Nevada secretary of state this week, he immediately celebrated the victory as legitimate.

“I am beyond humbled by the overwhelming support of our campaign. Nevadans made their voices heard,” Marchant declared on social media.

Such inconsistency has become a hallmark of election deniers in Republican primary contests across the U.S. in this year’s midterms. Dozens of GOP candidates who sought former President Donald Trump’s backing in Nevada, Ohio, Pennsylvania, Texas and elsewhere have spent months parroting his baseless claims of 2020 election fraud but then declared victory without raising such concerns in their own elections.

Amid such seeming hypocrisy, many Republican candidates are still vowing to pursue a series of election reforms that could make it more difficult to vote — particularly for those who traditionally support Democrats — in the name of election integrity.

Democratic National Committee Chair Jamie Harrison warned that “MAGA Republicans will do anything in their desperate chase for power.”

“From undermining our democracy by spreading Trump’s Big Lie, to laying the groundwork to try to cancel votes when they don’t agree with the outcome, but falling silent if they win, this is today’s Republican Party,” Harrison told The Associated Press.

In Nevada on Tuesday, Marchant was among a slate of election deniers who secured their places on the November ballot without questioning the legitimacy of the results. The group included candidates for Senate, state treasurer and a Las Vegas-area congressional seat. That’s even as the majority of counties relied upon Dominion voting machines, which continue to be the target of conspiracy theories by Trump and his allies.

The phenomenon extends well beyond Nevada.

In Pennsylvania, Republican nominee for governor Doug Mastriano spearheaded a state Senate hearing in which witnesses — including former Trump campaign attorneys Jenna Ellis and Rudy Giuliani — aired false claims about mass voter fraud. Mastriano also was outside the U.S. Capitol when a mob of Trump supporters stormed the building during the deadly 2021 insurrection. And he later tried to bring a partisan election audit to Pennsylvania before he was stripped of his committee chairmanship by his own party.

Mastriano made no mention of voter fraud as he declared victory in Pennsylvania’s Republican primary for governor last month.

The Mastriano campaign declined to respond to a question about the apparent double standard.

Paxton won his fiercely contested primary last month after spending much of the last year championing Trump’s bogus claims of election fraud. In the aftermath of Joe Biden’s presidential win, Paxton filed a legal challenge to the election results in four battleground states. He asked the U.S. Supreme Court to set them aside and allow the Republican-controlled state legislatures to determine the winner.

The high court rejected the challenge three days after the lawsuit was filed, finding Texas did not have standing to sue other states over how they conduct their elections. And the state bar moved to discipline Paxton just days after his primary win, claiming his leading role in petitioning the Supreme Court to block Biden’s victory was “dishonest.”

State and federal election officials across the country and Trump’s own attorney general have said there is no credible evidence the election was tainted. The former president’s allegations of fraud also were roundly rejected by courts, including by judges he appointed.

But after nearly two years of Trump’s constant claims that the election was “stolen,” which have been embraced by hundreds of Republican candidates across the U.S. seeking his support, an extraordinary number of Americans have lost faith in the U.S. election system.

Only 45% of U.S. adults said they have significant confidence that votes in the 2022 midterm election will be counted accurately, and 30% have some confidence, according to a February AP-NORC poll. Democrats were much more likely than Republicans to be very confident, 66% vs. 24%.

In addition to key state officials, several Trump-backed Senate candidates promoted the specter of election fraud over and over — except when delivering their primary victory speeches in recent weeks.

Georgia Republican Senate nominee Herschel Walker repeatedly claimed Biden’s victory was tainted by fraud over the last year and even called for seven swing states Trump lost to vote again. Ohio GOP Senate candidate J.D. Vance claimed the 2020 election was “rigged” or “stolen.” North Carolina Senate nominee Ted Budd, a Republican congressman, refused on the day of his May primary victory to say that Biden won the 2020 presidential election. And Pennsylvania Republican nominee for Senate Mehmet Oz said there was “definitely” widespread fraud in his state, even as the evidence says otherwise.

None raised similar claims about their own primary victories.

In Nevada, state GOP Chair Michael McDonald said Marchant acknowledging his primary win wasn’t hypocritical because he continued to have questions about vote-counting in the Las Vegas area.

“He was questioning the results last night, even though he was winning, which I found admirable,” McDonald said, recounting a 1:30 a.m. phone call with Marchant.

Marchant did not respond to requests for comment, but his campaign consultant Rory McShane said he continued to have questions about voting in Clark County, which leans Democratic and is where the vast majority of the state’s population lives, despite the race being called for him.

There may be no more vocal proponent of Trump’s baseless claims of election fraud falsehoods than Marchant, a 66-year-old former failed congressional candidate.

Marchant was present in Carson City when the party sent a dueling slate of electoral votes to Congress in December 2020. Throughout the primary, he was a fixture at rural county commission meetings during discussions about Dominion voting machines and potentially switching to hand-counting ballots. And he has toured the country with other 2020 election denialists, using phrases and terminology associated with QAnon conspiracy theorists.

Cisco Aguilar, the Democrat running against Marchant, described the Republican’s statements about the 2020 election, voting machines and mail-in ballots as out of touch with reality.

In an interview, Aguilar said he feels immense responsibility after Marchant’s victory and said he’s now weighing questions he hadn’t anticipated when he entered the race, such as whether agreeing to a debate would be giving a conspiracy theorist a platform.

“He’s created a massive fear among a subgroup of individuals here in Nevada,” Aguilar said. “I don’t even know if you can have a debate with someone who is unwilling to listen.”