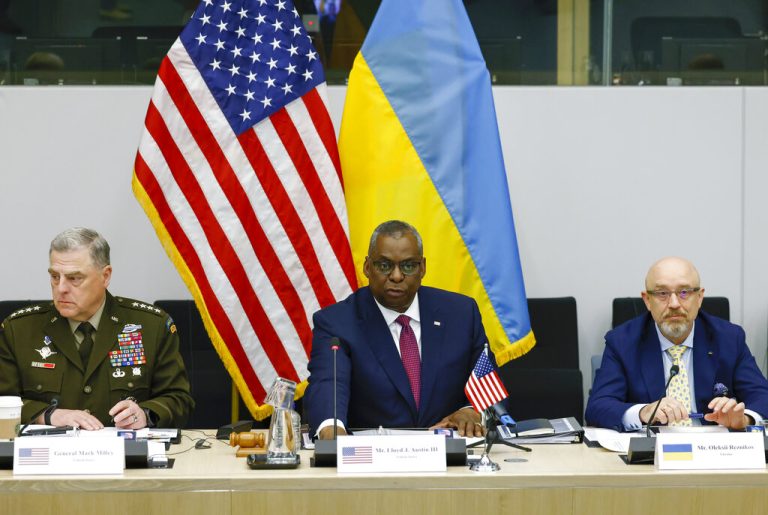 The U.S. announced it will send an additional $1 billion in military aid to Ukraine, as America and its allies provide longer-range weapons they say can make a difference in a fight where Ukrainian forces are outnumbered and outgunned by their Russian invaders.

President Joe Biden and his top national security leaders said Wednesday the U.S. is moving as fast as possible to get critical weapons to the fight, even as Ukrainian officials protest that they need more, faster, in order to survive.

The latest package, the U.S. said, includes anti-ship missile launchers, howitzers and more rounds for the High Mobility Artillery Rocket Systems (HIMARS) that U.S. forces are training Ukrainian troops on now. All are key weapons systems that Ukrainian leaders have urgently requested as they battle to stall Russia’s slow but steady march to conquer the eastern Donbas region.

“Gen. Milley and I have been in a number of fights. And when you’re in a fight, you can never get enough,” Defense Secretary Lloyd Austin said at a press conference in Brussels, referring to Gen. Mark Milley, chairman of the Joint Chiefs of Staff.

“I certainly understand where the Ukrainians are coming from, and we’re gonna fight hard to give them everything they need.”

The HIMARS and anti-ship systems are the kinds of longer range capabilities that over time can make a difference in the fight, Milley said. He said Ukraine will have trained HIMARS crews in the fight in a few weeks.

“If they use the weapon properly and it’s employed properly, they ought to be able to take out a significant amount of targets and that will make a difference,” he said. But he also noted that the numbers clearly favor the Russians.

“In terms of artillery, they do outnumber, they out-gun and out-range” the Ukrainian forces.

The aid is the largest single tranche of weapons and equipment since the war began. Biden, who spoke by phone with Ukraine President Volodymyr Zelenskyy for about 40 minutes Wednesday, also said the U.S. will send $225 million more in humanitarian assistance to provide safe drinking water, medical supplies, food, health care, shelter and money for families to buy essential items.

The U.S. remains committed, Biden said in a statement, “to supporting the Ukrainian people whose lives have been ripped apart by this war.”

The aid comes as Austin convened a meeting in Brussels of more than 45 nations to discuss support for Ukraine. At the start of the meeting, he warned that the West must step up weapons deliveries to Ukraine and prove its commitment to helping the country’s military fight along a 1,000-kilometer (620-mile) front line in a grinding war of attrition with Russia.

He told the participating nations, “We can’t afford to let up and we can’t lose steam. The stakes are too high.”

Overall, since the war began in late February, the U.S. has committed about $5.6 billion in security assistance to Ukraine, including this latest package. Officials said that about one-third of the latest $1 billion will be from presidential drawdown authority, which means the Pentagon will take weapons and equipment from it’s own stock and ship them to Ukraine. The remaining two-thirds would be equipment and weapons purchased from industry by the U.S. and then transferred to Ukraine.

Increased arms supplies can’t come too soon for the Ukrainian forces battling to keep Russia from taking control of their country’s industrial east after more than 3½ months of war. In his nightly address to the nation, President Zelenskyy pleaded Tuesday for more and faster deliveries of Western arms, specifically asking for anti-missile defense systems.

Ukrainian Deputy Defense Minister Hanna Malyar said Tuesday that without help from the West, “we will not be able to win this war.” She said Ukraine uses 5,000 to 6,000 artillery rounds a day, while Russia uses 10 times that many.

The defense ministers also planned to discuss moves to beef up forces along NATO’s own eastern flank and elsewhere, which have gathered strength since Russia invaded Ukraine.

On a separate but related subject, he wouldn’t commit to a timeframe for Sweden and Finland joining NATO. Turkish President Recep Tayyip Erdogan is blocking the membership bids, accusing the Nordic nations of supporting Kurdish militants deemed by Turkey to be terrorists.

“My aim is to solve this issue as soon as possible, but since we are several nations involved in this process, there is no way to tell you exactly when we will solve it,” Stoltenberg said.

Because of Turkey’s concerns, “this will take some more time than we originally expected,” he said.

Erdogan signaled Wednesday he won’t back down.

“We will most definitely not change our stance until Sweden and Finland take clear, concrete and determined steps in the fight against terrorism,” Erdogan said in an address to his ruling party’s legislators.

All 30 NATO members must agree to admit new members.