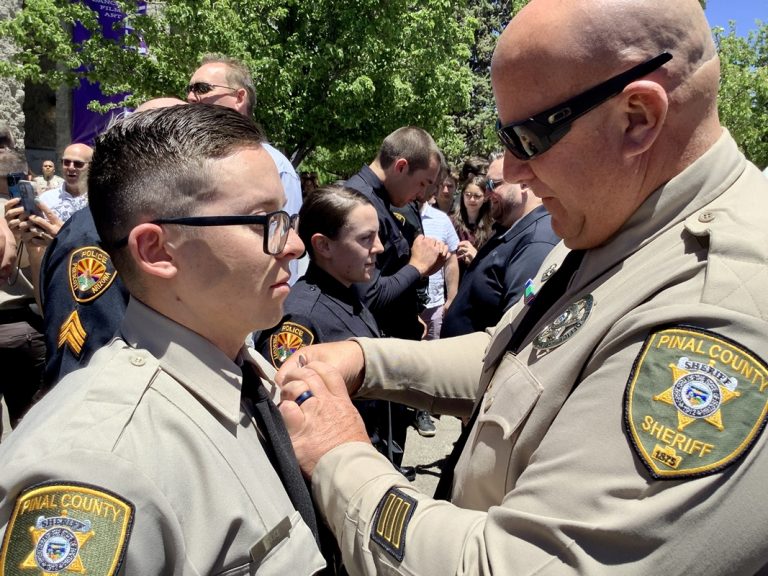 Photo: A NARTA Class 52 cadet gets help from a new colleague during a traditional badge pinning

The recruits successfully completed 21 weeks of rigorous training and testing at the Northern Arizona Regional Training Academy (NARTA) based on the YC Prescott campus. The graduates represent the 52nd class from “the best law enforcement academy in the state of Arizona,” according to Academy Commander Nathan Auvenshine.

The traditional NARTA graduation on June 2 filled the Yavapai College Performing Arts Center with proud family members and friends who watched a group swearing-in ceremony and a video chronicle of cadets’ training before participating in a badge pinning.

In welcome remarks, YC Vice President of Finance and Administration Dr. Clint Ewell said he was inspired by the graduates’ sacrifices and ability to overcome obstacles. “I hope you will continue to inspire others in your careers as you have me today,” he said.

In his remarks, NARTA Class 52 President Jaime Herrera, who is posted with the Pinal County Sheriff’s Office, said he has “never been so honored” than to have been chosen by his classmates to help ensure their success. He thanked the cadre of NARTA instructors for the discipline they instilled, his classmates for their motivation and the family and friends of all the graduates for their encouragement and support. “We acknowledge that this wouldn’t have happened without you,” he said to audience members.

Herrera directed his closing remarks to NARTA Class 52: “Thank you for the bonding, the memories and the laughs… I hope you seek additional training and never settle for ordinary.” Repeating a call to action he used on fellow cadets every morning during the academy, he said one final time, “Time’s up. Let’s do this!”

Yavapai County Sheriff David Rhodes was the NARTA Class 52 graduation keynote speaker. He emphasized that law enforcement in 2022 is much more than preventing and solving crimes. “Ours is a business of people. Ours is a business of leadership.” And, he said, no matter how many sophisticated tools law enforcement has at its disposal, they don’t supplant human relations, or education and training in things like public health issues and de-escalation tactics.

The sheriff said he envisions more than a few NARTA graduates serving in leadership roles during their careers. When that happens, he said, “Be bold enough — be brave enough to say we need to try something new because this isn’t working anymore. “

Following are the NARTA Class 52 graduates and their respective law enforcement agencies: