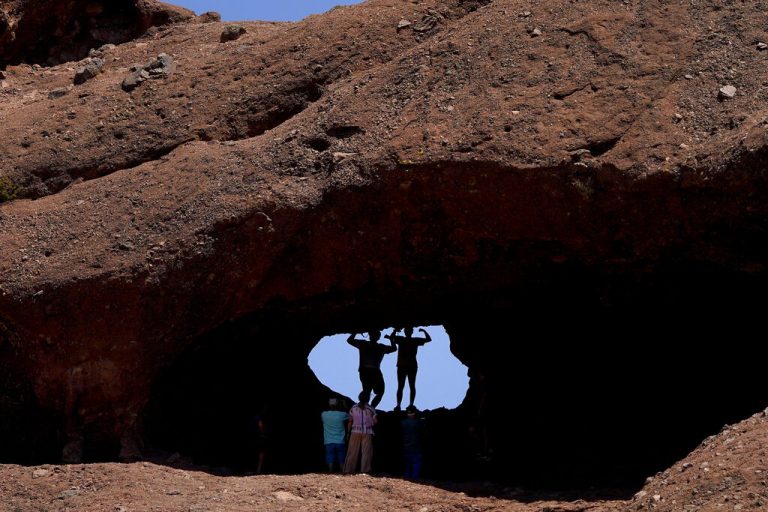 Photo: A pair of mid-day hikers pose for a picture in the hole in the rock at Papago Park, Phoenix

The National Weather Service in Phoenix reported a temperature of 114 degrees Fahrenheit (46 degrees Celsius), tying the record high for the date set back in 1918.

Las Vegas tied a record for the day set in 1956, with temperatures soaring to 109 F (43 C). The National Weather Service said there was a chance the high temperatures in both cities could rise even more.

Temperatures in several inland areas of California reached triple digits by the afternoon, with a record high for June 11 of 122 F (50 C) reached in Death Valley.

Excessive heat warnings and heat advisories were issued for parts of Northern California through the Central Valley and down to the southeastern deserts.

The National Weather Service also predicted 114 F (46 C) in Palm Springs and temperatures around 100F (38 C) across the San Joaquin Valley and the Sacramento area.

Heat was expected to extend to inland portions of the San Francisco Bay Area but most of the California coastal zones remained free of heat advisories.

Meteorologists warned of very high “heat risk” in south-central Arizona through the weekend. The high temperatures were likely to approach record-breaking territory — anywhere between 110 F (43 C) and 115 F (46 C). They have urged the public to limit outdoor activities.

Parts of New Mexico and Texas also were also to see triple-digits.

Heat is part of the normal routine of summertime in the desert, but weather forecasters say that doesn’t mean people should feel at ease. Excessive heat causes more deaths in the U.S. than other weather-related disasters, including hurricanes, floods and tornadoes combined.

Scientists say more frequent and intense heat waves are likely in the future because of climate change and a deepening drought.