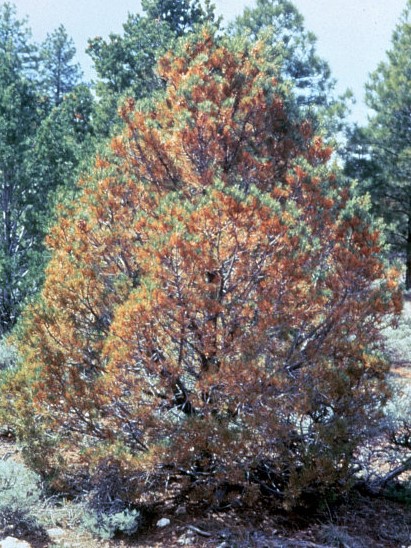 Pinyon pines have repeatedly been infected with Pinyon Pine Scale, Matsucoccus acalyptus, because of drought and environmental changes due to development. This native insect has a complex life cycle that causes the decline and eventual death of native pine trees. Insect management requires strategic applications of insecticides and plant food.

Pinyon needle scale lowers the tree’s vigor by repeatedly attacking the needles formed during the previous growing season. A healthy pinyon pine should have 4-5 years of long branches of needles before shedding the older needles. A healthy tree looks almost tropical when full of green pine needles. After repeated infestation, the pine only has the previous year’s needles. It cannot harvest and store enough energy to meet its needs and maintain defenses against other pests. The canopy of an infected tree often declines over several years before starving to death.

Male scale insects emerge from their covering late fall and pupate in the soil below the tree. The wingless females emerge from their scaled covering in early spring. Simultaneously, the mature, winged adult males emerge from the ground to mate with females. This emergence is temperature-driven and occurs anytime in February and March. After mating, the females lay yellow eggs in clusters of white cotton webbing at the tree’s base and in the main crotches of lower branches. Visible to the naked eye, they may also be found on rooftops and rain gutters of buildings adjacent to infected pinyon pines. These egg sacks should be collected and disposed of when noticed.

The eggs hatch into crawlers that move up the tree to the branch tips. The crawlers usually colonize the previous year’s foliage causing stunted needles and defoliation. Each bug pierces the needle’s surface and feeds on the living sap from the tree. Once feeding begins, they become immobile, cover their body with a wax coating and turn black. This typically occurs from May to early June. Scale remains attached to the needle for the growing season maturing inside its protective shell. In spring, they resume growth until they emerge as adults to mate and create a new generation the following year. 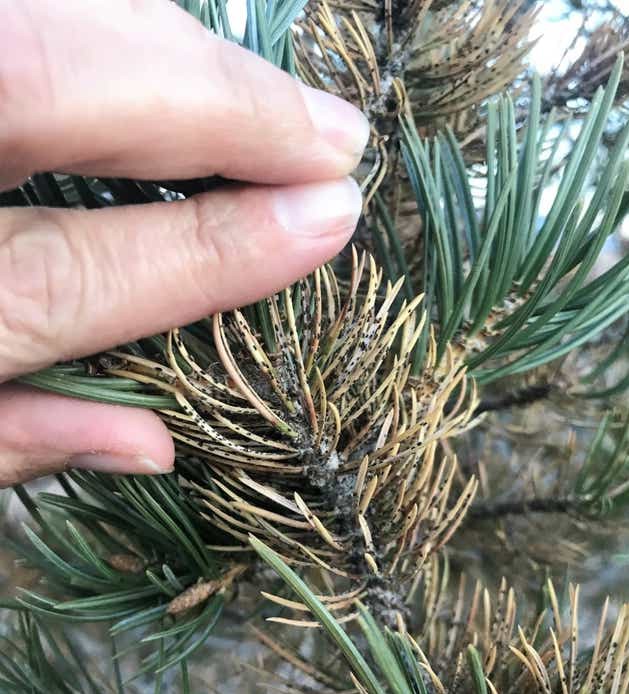 Pinyon needle scales are seen in the protected larval state and appear as a black motionless dot on the needles of infested trees. Often resembling several pencil-like dots on each needle.

Prevention is the deep watering of your tree. It is recommended to water native trees through summer once each month to a depth of 24 inches. Combine this deep water with an annual feeding with Watters 7-4-4 “All Purpose Plant Food” to increase the health of your pine trees.

Plant Protector – is a liquid scale killer administered at the base of trees that systemically taints the sap under the bark. After digestion of this treated wood, the beetle dies, and the tree heals itself. One treatment should be administered as a defense to further attacks and best applied each spring.

Cyonara Insect Spray is especially effective when scales are in the crawler stage. This requires close monitoring through April and May to effectively reduce populations.

Dead trees should be cut down to reduce fire danger and the risk of a tree falling over. The brush should be chipped or hauled off, and the lumber cut and split. Thinning trees is an excellent long-term preventative measure.

Treat healthy pine trees each spring with 7-4-4 All Purpose Plant Food and an application of Plant Protector to maintain healthy pine enjoyment.

Watters Garden Classes resume on Saturday, June 11, 2022, at 9:30 AM. This week’s class is titled “The Doctor is in the House – How to Heal Sick Plants”. Current Bug problems such as Aphids and Bark Beetle will be discussed in detail.