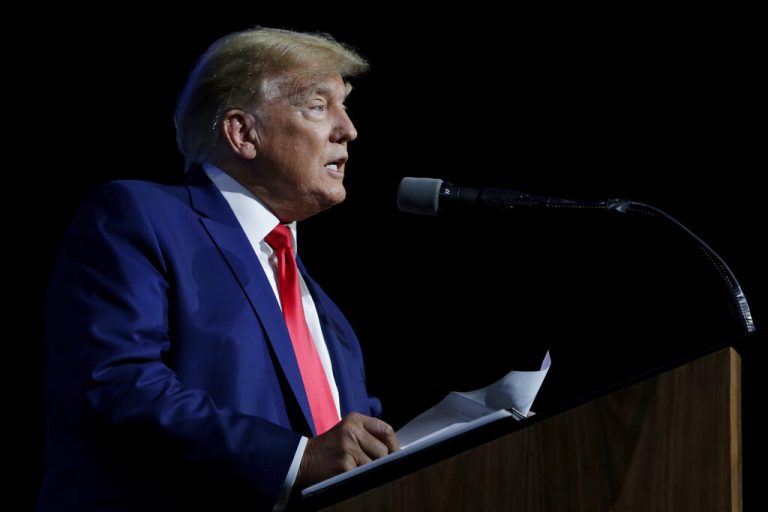 Donald Trump on Thursday endorsed investor Blake Masters in the crowded Republican Senate primary in Arizona, citing the candidate’s strident support of  the fraud in the 2020 election.

The former president said in a statement that Masters is a “great modern-day thinker” and that Masters’ chief rival, Arizona Attorney General Mark Brnovich, has done nothing about the election fraud that Trump falsely claims cost him a second term.

Republicans hope the winner of the Aug. 2 primary can unseat Sen. Mark Kelly, who faces no major opposition for the Democratic nomination, and flip control of the Senate back to the GOP in one of the most closely contested general election races in November.

Trump’s endorsement could shake up a primary campaign that is without a clear front-runner and is largely defined by jockeying for Trump’s backing. Despite his reelection loss to Democrat Joe Biden, Trump remains popular with his party’s core supporters.

The endorsement is likely to elevate Michels, a late entrant into the race, and marks a blow for Rebecca Kleefisch, who served as lieutenant governor under former Gov. Scott Walker and has been leading in the polls. The winner of the Aug. 9 primary will will face Democratic Gov. Tony Evers.

Masters, 35, has been a fierce critic of the technology industry where he built his career and has given voice to the cultural grievances that animate GOP base voters. He has called for reducing legal immigration and espoused the baseless “great replacement” conspiracy theory, claiming Democrats are trying to “replace Americans who were born here.”

He has said “I think Trump won in 2020,” and has claimed that election officials, the media and big tech companies “conspired to manipulate the 2020 election.”

Trump, who has long hyped the power of his endorsements and held up his record as a measure of his ongoing hold on the Republican Party, has been bruised by a series of losses in early primary races in recent weeks.

Last month, Georgia voters rejected Trump’s efforts to punish the Republican governor and secretary of state, both of whom rebuffed Trump’s extraordinary efforts to overturn the results of the 2020 presidential election. Trump’s chosen candidates lost in Nebraska, Idaho and North Carolina. In Pennsylvania, the Senate primary that pitted Trump-endorsed celebrity heart surgeon Mehmet Oz against former hedge fund CEO David McCormick is in the midst of a recount.

But the former president does have some major wins, particularly in Ohio last month, where Vance spiked in the polls after Trump’s endorsement in the Senate race.

Trump is counting on the next round of major primaries to counter perceptions that his influence over the Republican Party is waning as he lays the groundwork for a 2024 presidential run.

In addition to the Arizona Senate race, Trump is targeting Wyoming Rep. Liz Cheney, a chief Trump critic who voted for his impeachment and is the top Republican on the House committee investigating the attack on the Capitol on Jan. 6, 2021. Trump held a rally last weekend in the state to boost Cheney’s primary challenger, Harriet Hageman, who is currently far ahead in the polls.

Masters, who grew up in Tucson and moved back to southern Arizona in 2018, was until recently a senior executive for Thiel’s investment firm and foundation. Masters is making his first run for political office.

He gained notoriety in some circles for his detailed notes on a class Thiel taught at Stanford University. The two collaborated on the 2014 book, “Zero to One: Notes on Startups, or How to Build the Future,” and Masters went to work for Thiel. He rose to chief operating officer of Thiel Capital and president of the Thiel Foundation.

Trump had long been expected to endorse Masters. Like Vance, Masters is a Thiel protégé whose campaign has received millions in support from the tech billionaire, who co-founded PayPal and was an early investor in Facebook. Many had expected Trump to make his support official after Vance’s win.

“Despite having such an amazing business career and wonderful family, Blake has decided that he wants to make a difference for the people of our Country,” Trump said in a statement endorsing Masters.

He said Masters would be strong on border security and gun rights, would cut taxes and regulations, and would support the military.

Masters, in response, said in a statement, “I wish everyone could know how this feels.” He said that “soon we will have a young, fearless, dynamic America First coalition in the U.S. Senate.”

As in most contested Republican primaries, Trump’s Arizona endorsement is a prize that was the subject of intense positioning by most of the candidates. Several, including Masters, made multiple trips to Trump’s Mar-a-Lago home in Florida and sought favor with the former president’s advisers. Last summer, businessman Jim Lamon, in a bid to draw Trump’s attention, aired an ad on Fox News in the New York-New Jersey market while Trump was staying at his golf course in Bedminster, New Jersey.

Trump in April ruled out backing Brnovich, who has opened a criminal investigation into the 2020 election in Arizona’s largest county after claims of fraud by Trump and his allies based on conspiracy theories and misleading data. Brnovich has trumpeted some of the allegations, claiming they raise questions about that election, but he did not deliver what Trump wanted most: indictments of election workers.

Trump again attacked Brnovich in his statement endorsing Masters, repeating the falsehood that the election in Arizona was “rigged and stolen.”

Brnovich defended his record on the 2020 election in a statement responding to Trump’s endorsement, pointing to his continuing investigations of fraud allegations. Lamon doubled down on attacking Masters, whom he called “a wholly-owned subsidiary of a Big Tech, California billionaire.”

Trump has made a habit of announcing his endorsements just days or weeks before major races. That can add to the drama, but it also gives the campaigns he supports little time to publicize his endorsement. Trump has noted in the days after the Pennsylvania primary that his endorsement of Oz came “very late, many days AFTER Early Voting began,” suggesting he may have come to recognize that impact of his timing.

Kelly is a retired astronaut who became well-known in the state when his wife, then-U.S. Rep. Gabrielle Giffords, was shot and critically wounded at a constituent event in Tucson in 2011. Kelly was elected last year to finish the last two years of the late GOP Sen. John McCain’s term and is now seeking a full six-year term.

Once a GOP stronghold, Arizona has become a battleground thanks to a growing Latino population, an influx of more moderate newcomers and Republicans’ struggles with suburban women during the Trump presidency.

The race will serve as a test of how enduring those Democratic gains will be. Polls show Biden’s approval rating floundering and voters frustrated with steep inflation and rising gas prices.

The Club for Growth, a powerful spending group that has clashed with Trump in recent weeks, spending millions backing rivals of several of his chosen candidates, praised Trump’s decision in Arizona.

The organization’s president, David McIntosh, said that when the group and Trump work together, “real conservatives win, and that’s exactly what will happen in Arizona.”