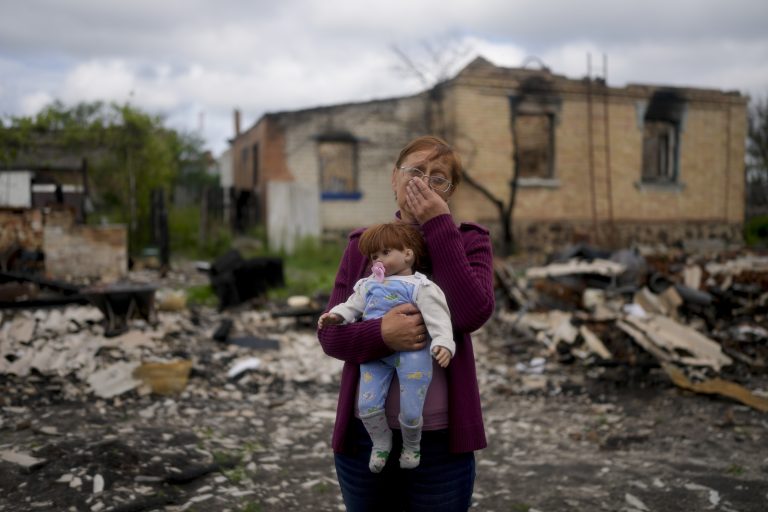 Photo: Nila Zelinska holds a doll belonging to her granddaughter, she was able to find it in her destroyed house in Potashnya on the outskirts of Kyiv

Russian forces in a “frenzied push” have seized half of Sievierodonetsk, the eastern Ukrainian city that is key to Moscow’s efforts to complete the capture of the industrial Donbas region, the mayor said Tuesday.

“The city is essentially being destroyed ruthlessly block by block,” Oleksandr Striuk said. He said heavy street fighting continued and artillery barrages threatened the lives of the estimated 13,000 civilians still sheltering in the ruined city that once was home to more than 100,000.

A Russian airstrike on Sievierodonetsk hit a tank of nitric acid at a chemical factory, causing a huge leak of fumes, according to Serhiy Haidai, governor of the Luhansk region. He posted a picture of a big cloud hanging over the city and urged residents to stay inside and wear gas masks or improvised ones.

Haidai said later Tuesday that “most of Sievierodonetsk” was under Russian control, though he added that fierce fighting continued and the city wasn’t surrounded.

Sievierodonetsk is important to Russian efforts to capture the Donbas before more Western arms arrive to bolster Ukraine’s defense. Moscow-backed separatists have been fighting Ukrainian troops in the region for eight years and held swaths of territory even before the invasion.

President Joe Biden said Tuesday the U.S. will provide Ukraine with the more advanced rocket systems that its leaders have been begging for. In an essay published in The New York Times, Biden said the rocket systems will enable Ukraine “to more precisely strike key targets.”

U.S. officials, speaking before Biden’s announcement on condition of anonymity, said Washington will send Ukraine a small number of high-tech, medium-range rocket systems. The rockets could be used both to intercept Russian artillery and to take out Russian positions in towns where fighting is intense, such as Sievierodonetsk.

The rocket systems would be taken from U.S. inventory, which would get them to Ukraine quickly. Ukrainian troops would also need training on the new systems, which could take at least a week or two.

Sievierodonetsk, which is 145 kilometers (90 miles) south of the Russian border, is in an area that is the last pocket under Ukrainian government control in the Luhansk region. The Donbas is made up of the Luhansk and Donetsk regions.

Striuk said more than 1,500 residents have died of various causes since Russia’s invasion of Ukraine in late February. Evacuation efforts from Sievierodonetsk have been halted because of shelling.

“Civilians are dying from direct strikes, from fragmentation wounds and under the rubble of destroyed buildings, since most of the inhabitants are hiding in basements and shelters,” Striuk said.

Electricity has been cut off, and people need water, food and medicine, the mayor said: “There are food supplies for several more days, but the issue is how to distribute them.”

In his nightly video address, Ukrainian President Volodymyr Zelenskyy said the situation in the Donbas remains “extremely difficult” as Russia has put its army’s “maximum combat power” there.

At least three people were killed and six wounded overnight in a Russian missile strike on the city of Sloviansk, west of Sievierodonetsk, Donetsk Gov. Pavlo Kyrylenko said in a Facebook post Tuesday. A school was among several buildings damaged.

A crater was blasted in the road between two apartment buildings heavily pockmarked by shrapnel.

The floor and stairwell of one building were smeared with blood.

Resident Olena Voytenko, 59, said she knew one of the people killed, a man whose apartment caught fire in the blast.

Another resident, Mikhaylo Samoluk, said the strike occurred in the middle of the night. “I was on my sofa and suddenly my sofa just jumped in the air,” he said.