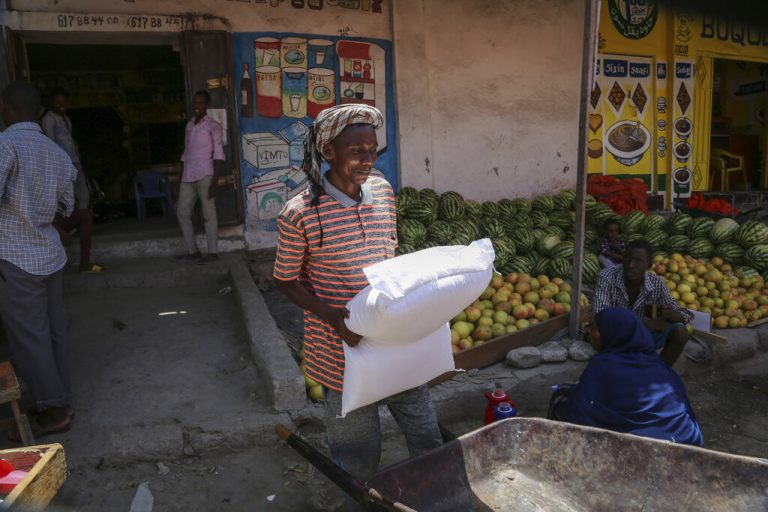 Photo: A man carries a sack of wheat flour imported from Turkey in the Hamar-Weyne market in the capital Mogadishu, Somalia

It now costs Ayan Hassan Abdirahman twice as much as it did just a few months ago to buy the wheat flour she uses to make breakfast each day for her 11 children in Somalia’s capital.

Nearly all the wheat sold in Somalia comes from Ukraine and Russia, which have halted exports through the Black Sea since Moscow waged war on its neighbor on Feb. 24. The timing could not be worse: The U.N. has warned that an estimated 13 million people were facing severe hunger in the Horn of Africa region as a result of a persistent drought.

Abdirahman has been trying to make do by substituting sorghum, another more readily available grain, in her flatbread. Inflation, though, means the price of the cooking oil she still needs to prepare it has skyrocketed too — a jar that once cost $16 is now selling for $45 in the markets of Mogadishu.

“The cost of living is high nowadays, making it difficult for families even to afford flour and oil,” she says.

Haji Abdi Dhiblawe, a businessman who imports wheat flour into Somalia, fears the situation will only worsen: There is also a looming shortage of shipping containers to bring food supplies in from elsewhere at the moment.

“Somalis have no place to grow wheat, and we are not even familiar with how to grow it,” he says. “Our main concern now is what will the future hold for us when we currently run out of supplies.”

Another 18 million people are facing severe hunger in the Sahel, the part of Africa just below the Sahara Desert where farmers are enduring their worst agricultural production in more than a decade. The U.N. World Food Program says food shortages could worsen when the lean season arrives in late summer.

“Acute hunger is soaring to unprecedented levels and the global situation just keeps on getting worse. Conflict, the climate crisis, COVID-19 and surging food and fuel costs have created a perfect storm — and now we’ve got the war in Ukraine piling catastrophe on top of catastrophe,” WFP Executive Director David Beasley warned earlier this month.

Even the cost of therapeutic food for malnourished children could rise 16% over the next six months because of the war in Ukraine and disruptions related to the pandemic, UNICEF says.

African countries imported 44% of their wheat from Russia and Ukraine between 2018 and 2020, according to U.N. figures. The African Development Bank is already reporting a 45% increase in wheat prices on the continent, making everything from couscous in Mauritania to the fried donuts sold in Congo more expensive for customers.

“Africa has no control over production or logistics chains and is totally at the mercy of the situation,” said Senegalese President Macky Sall, the African Union chairperson, who has said he will travel to Russia and Ukraine to discuss the price woes.

Russian President Vladimir Putin pressed the West last week to lift sanctions against Moscow over the war in Ukraine, seeking to shift the blame from Russia to the West for a growing world food crisis that has been worsened by Ukraine’s inability to ship millions of tons of grain and other agricultural products while under attack.

Putin told Italian Prime Minister Mario Draghi that Moscow “is ready to make a significant contribution to overcoming the food crisis through the export of grain and fertilizer on the condition that politically motivated restrictions imposed by the West are lifted,” according to the Kremlin.

Western officials have dismissed the Russian claims. U.S. Secretary of State Antony Blinken has noted that food, fertilizer and seeds are exempt from the sanctions imposed by the U.S. and many others on Russia.

Meanwhile, Ukraine has accused Russia of looting both grain and farm equipment from territories held by its forces. A Russia-installed official in southern Ukraine has confirmed that grain from last year’s harvest there is being sent to buyers in Russia, according to a report Monday by Russia’s Tass state news agency.

That grain, however, isn’t make its way to Africa. In Cameroon, baker Sylvester Ako says he’s seen his daily clientele drop from 300 customers a day to only 100 since bread prices jumped 40% because of the lack of wheat imports.

He’s already let three of his seven employees go, and worries that he will have to shutter his Yaounde business entirely unless something changes.

Along with the shortfall in wheat imports, the African Development Bank is also warning of a potential 20% decline in food production on the continent because farmers are having to pay 300% more for their imported fertilizer.

The organization says it plans to address the issues through a $1.5 billion plan that will provide farmers in Africa with certified seeds, fertilizer and other help. Reducing dependence on foreign imports is part of the strategy, but those economic transitions are likely to take years, not months.

Senegal’s president says appetites can pivot more quickly. He’s encouraging Africans to consume local grains that were once the staples of their diets.

Follow all AP stories on the war in Ukraine at https://apnews.com/hub/russia-ukraine