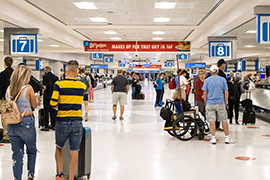 Higher prices for gas, airfares and just about everything else do not appear to be holding back travel this Memorial Day weekend, which is “falling back to pre-pandemic levels,” experts said Friday.

Travel this weekend is expected to increase by 8.3% nationwide from the last Memorial Day holiday, with 39.2 million Americans traveling and more than 90% of them driving to their destinations, said Aldo Vazquez, AAA Arizona spokesperson. That includes about 811,000 Arizonans who are expected to travel for the holiday, with 724,000 going by car.

The surge in travel comes despite a surge in gas prices to record levels, with a gallon going for $4.59 on average nationally, according to AAA. In Arizona, the average is even higher at $4.925 a gallon, making it the ninth-costliest state on average.

“I don’t think gas prices are scaring people (from traveling),” said Jennifer Beck, a travel agent with Carlisle Travel Management. “The desire to travel and get out again is definitely overseeing the cost of gas.”

It’s not just gas. Inflation had risen 4.9% in April from a year earlier and is running around a 40-year peak, according to the Bureau of Economic Analysis.

And air fares are also on the rise: Airfare increased by 18.6% between March and April, according to the Bureau of Labor Statistics. AAA found that the average lowest airfare is 6% more than last year at $184 per ticket.

While 90% of Americans said that gas prices are a consideration in their travel plans, according to an American Hotel and Lodging Association survey, that does not appear to have daunted Americans. They are expected to make this Memorial Day weekend, the kickoff to the summer travel season, the busiest in three years.

Travelers are simply factoring the cost of gasoline into their budget and changing their spending accordingly, Vazquez said.

That was echoed by Kim Sabow, the CEO and president of the Arizona Lodging and Tourism Association, who said in a statement that “various surveys have indicated that the high gas prices will not curtail travel, but are likely to impact how much is spent on entertainment and food.”

Rather than cancel trips altogether because of cost increases, 57% of travelers told the AHLA that they are likely to take fewer leisure trips, and 54% say they will take shorter trips. Beck recommends that Arizonans looking to travel for the holiday stay local by staying at a resort, like the Arizona Biltmore, for a staycation instead.

One thing that has not changed from the pandemic is the preference for driving that was sparked by COVID-19 transmission fears and travel restrictions. The fondness for driving has continued into 2022 as “Americans always had this wanderlust to travel,” Vazquez said.

Still, 3.01 million people nationwide are expected to fly this holiday weekend, a 25% increase from 2021, according to the AAA.

For people who are looking to travel by air, Beck suggests not waiting until the last minute. She said travelers should buy plane tickets “more than three weeks out from your travel date” to get the best price.

The biggest gains have been in the least-popular ways to travel: Cruise ships, trains and buses saw a 200% increase for Memorial Day compared to 2021, according to AAA.

“Travel is up and going again,” Beck said. “They’re excited to travel again.”

PrevPreviousHow do blood sugar, blood pressure and race intersect? A research team is asking that question – NAU
NextChino Valley- Road Closure Notice for Tuesday, May 31, 2022Next