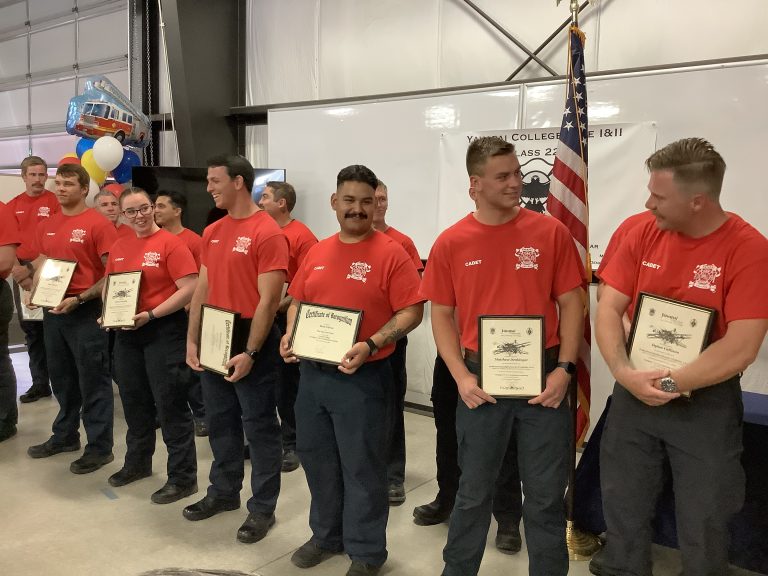 Fifteen Yavapai College students emerged from a grueling 17-week fire academy mentally and physically stronger, eminently capable of responding to emergencies and bonded with a cadre of lifelong friends.

Their transformational academy experience earned them each the honor of joining the revered ranks of the fire service.

“The mindset changed from ‘I am here for me’ to ‘I am here for a greater purpose,’ and that is one of the greatest transformations for me to see,” said outgoing YC Fire Science Program Director Mikayla Baker. “I saw the students not only grow as a team but grow individually to become some of the best cadets I have seen in a long time and it was an honor for this to be my last class as the director.”

The YC Fire Academy spring graduating class was feted during a traditional promotion ceremony earlier this month at the Central Arizona Regional Training Academy in Prescott Valley. Their instructors, mentors and guest speakers in turn praised the graduates’ grit,   resilience and courage, deeming them worthy of the fire service.

While everyone emerges from the fire academy a better version of themselves, Baker said this particular class distinguished itself by its teamwork. She said it was remarkable how they supported and pushed each other, especially during the last “grinder” – a rigorous physical fitness challenge. “Every single person was there when their classmate was going through the obstacles cheering them on and giving them that drive to finish. It was something that I haven’t seen in a long time.”

Fire Academy Lead Instructor Matt Fischer, an engineer with the Sedona Fire Department, referenced the transformational effect on the academy graduates in his remarks saying, “I don’t know if you can tell, but this is a completely different crew than the one that started this journey all those weeks ago.”

Keynote speaker Jim Bushman, an engineer with Central Arizona Fire and Medical Authority, shared with the standing-room only audience the history of the firefighter shield and its evolution from the Maltese cross used to identified the armored Knights of St. John on the island of Malta during the 11th and 12th centuries. The knights were known for their firefighting skills in battle and their ability to care for the sick and injured.

Like the Maltese knights, Bushman said, firefighter academy cadets are asked to “put aside their natural self to become a knight, a hero, a firefighter.”

PrevPreviousWatch Experience: Streaming and Its Impact on The Entertainment Industry
NextUkraine fears repeat of Mariupol horrors elsewhere in DonbasNext