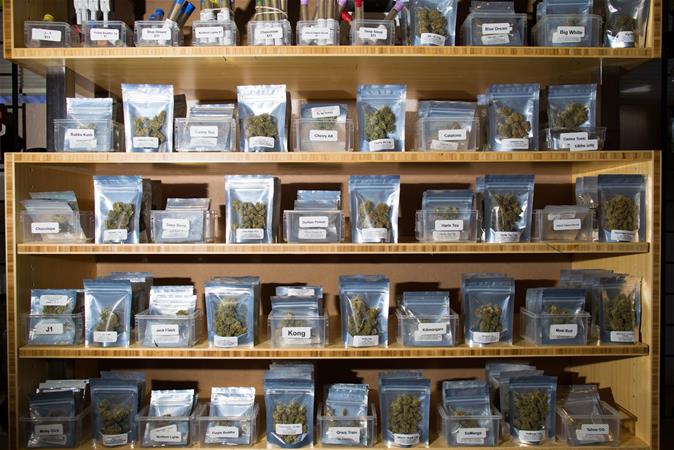 When William smokes marijuana, he says he always makes sure to tightly close the windows of his studio apartment. As a cannabis consumer who lives in government-subsidized housing, he worries that although marijuana use is legal in Arizona, if caught, he could be evicted.

“My situation is so precarious, I wouldn’t want to put it to the test,” said William, a 72-year-old Tucson resident, who asked that his last name not be made public. It’s difficult enough, he said in an email, to find apartments that will accept Housing Choice Vouchers, a type of federal government subsidy that helps low-income families, the elderly and people with disabilities rent privately owned housing.

To William, marijuana is “the greatest anti-depressant there ever was.” It’s helped him with depression and anxiety, he said in an interview. But he can’t consume it in his home without fear of becoming homeless – a situation William calls “absolutely ridiculous.”

Although the use of both medical and recreational marijuana are legal in Arizona, marijuana use of any sort is still illegal under federal law – meaning it’s banned from government-subsidized housing under rules set by the U.S. Department of Housing and Urban Development.

Marijuana advocates and attorneys call that policy discriminatory and counterproductive.

“The fact they’re living in federal housing says they have no resources,” said Bill Meeks, a former police officer who now is a medical marijuana coach in Tucson.

“But here’s this, you know, the iron hand of the government hanging over and ready to slap them out of their residency anytime they use a sublingual tincture,” he said, referring to a type of medicinal marijuana. “It’s ludicrous.”

In 1970, the federal government classified cannabis as a Schedule I drug, and in 1996, Congress passed a law that prohibited drug and alcohol “abusers” in government-subsidized housing.

Those policies haven’t changed in the decade since – despite 37 states now permitting the use of marijuana for medical reasons and 18 states, including Arizona, allowing it recreationally.

Public housing agencies must establish standards that allow existing residents to be evicted if they use controlled substances, including marijuana, according to a HUD official.

“However, the law does not compel such action, and (public housing agencies) have discretion to determine, on a case-by-case basis, the appropriateness of program termination of existing residents for the use of medical marijuana,” the official wrote in a statement provided to The Howard Center.

Of the nearly two dozen public housing authorities in Arizona, at least six – Phoenix, Glendale, Tucson, Chandler, Yuma and Yuma County – have written policies that explicitly forbid marijuana consumers of any kind from applying to their subsidized housing programs. Under HUD rules, even those without clear written policies are supposed to ban applicants who consume marijuana in any form, medically or otherwise.

Despite these policies, officials at two housing authorities said they do not ask questions about marijuana when considering an applicant’s eligibility, although one does tell applicants that marijuana use of any kind is not permitted. A third housing authority official said an applicant would have to smoke marijuana in the presence of a staff member during the application process to be denied acceptance to its program. A fourth housing authority said tenants are typically given a warning the first time they are caught using marijuana but could be evicted if they continue to use it.

Tucson’s housing department has a “don’t ask, don’t tell” approach when it comes to marijuana, said Liz Morales, director of Housing and Community Development for the city. Its written policies say, however, that if a tenant is found to be using medical marijuana, their housing assistance will be terminated.

“If we didn’t cite that, it would show that we’re, you know, we could be out of compliance with HUD on that piece,” Morales said. “But to me, this is just problematic because I wouldn’t just terminate someone if it was only because of medical marijuana, even though HUD tells us to.”

In an April 12 memo to staff, HUD Secretary Marcia Fudge announced new steps the agency would be taking to help people with criminal backgrounds gain access to HUD-funded housing.

But the new plan won’t change HUD’s rules around current marijuana use. So although people who picked up charges for using marijuana when it was still illegal could soon have an easier time getting into subsidized housing, people who currently use marijuana legally under Arizona state law still are shut out.

Amid this legal conflict, Arizona is benefiting from the marijuana industry. The state collected more than $650 million in marijuana-related taxes in 2021, according to the Department of Revenue, and the industry has created jobs.

The boom in the marijuana industry has only exacerbated the racial inequity caused by marijuana policing. About 8 out 10 marijuana business owners are white, according to a 2017 study by MJBizDaily, a publication that covers the cannabis industry. Yet in 2018, Black Arizonans were three times more likely to be arrested for marijuana possession than white Arizonans, according to an American Civil Liberties Union report.

Black, Latino and Native American households in Arizona disproportionately rely on subsidized housing, according to HUD and census data, meaning they’re most likely to be affected by HUD’s strict anti-marijuana rules.

The majority of Americans are in favor of legalizing marijuana at the federal level, according to a 2021 study from the Pew Research Center.

“But while it is still illegal, there’s really not much that can be done about it when somebody is getting subsidized housing,” said Jamie Ibrahim, deputy director of the Southern Arizona Legal Aid. “Because it is just a straight up bar.”

The need for change

Meeks, the medical marijuana coach, is a self-described “old Reagan Republican, Mormon boy, 38-year cop.” Although he once put “people in prison for cannabis,” he said his life changed when he began using medical marijuana after a major back surgery. Now, he helps senior citizens navigate the world of medical marijuana.

At least half a dozen of his clients have been denied or evicted from subsidized housing because of cannabis use, Meeks said. One client, who has a disability and uses a wheelchair, was “almost shaking in fear” that she would be evicted for using medical marijuana in her subsidized Tucson housing, he said.

“Here’s a person who’s looking for pure stability, a little bit of relief, very late in their life. And the next thing you know, because of the federal-state conflict, now all of a sudden their lives are in complete turmoil,” Meeks said.

“Medical marijuana has been very beneficial for those who have chronic pain, cancer, glaucoma, HIV, AIDS, Alzheimer’s, PTSD, Crohn’s disease,” said Jennifer Burns, who is an expert in naturopathic medicine and owns the Burns Integrative Wellness Center in Phoenix.

“It can release the pain in symptoms,” Burns said. “It can help the nausea so people can actually eat.”

The Arizona Medical Marijuana Act states that no landlord may refuse to lease to a person based solely on the applicant’s status as a cardholder, unless it would cause the landlord to lose a monetary or licensing-related benefit under federal law or regulations. So landlords can’t refuse cardholders – unless those landlords receive federal subsidies, like HUD funding.

A landlord can still say, “I get it, you’re a patient, but I’m going to say you can’t smoke marijuana in your rental unit,” said Mike Robinette, executive director of the Arizona chapter of the National Organization for the Reform of Marijuana Laws.

There’s a fundamental failure to make a distinction between recreational and medical use of marijuana, according to Tom Dean, the vice president of the Arizona Cannabis Bar Association.

Although housing providers can prohibit recreational use of marijuana as they do tobacco and alcohol, he said, medical marijuana should be different.

“Medical use of marijuana should be allowed anywhere that a person is allowed to use insulin or penicillin,” Dean said.

U.S. Rep. Eleanor Norton, who is the District of Columbia’s nonvoting member of Congress, has tried to challenge HUD’s stance on marijuana. Over three years, she has introduced and reintroduced a bill that would make it illegal for people to be denied subsidized housing for using marijuana in states where it’s otherwise legal. The bills have not received any hearings.

Last year, she wrote to HUD asking that it not deny admission to or evict people from subsidized housing in states where marijuana use has been legalized. HUD rejected her request.

Recently, Rep. Jerrold Nadler, D-N.Y., introduced legislation to decriminalize marijuana at the federal level. His bill, the Marijuana Opportunity Reinvestment and Expungement Act, passed the House but is expected to die in the Senate for a second time.

Until federal law changes, marijuana users in federally subsidized housing in Arizona remain stuck between state and federal law, worried that they could be evicted at any time.

“The fact that cannabis is legal in this state means nothing,” William in Tucson said in an email.

This story was produced for the Howard Center for Investigative Journalism at Arizona State University’s Walter Cronkite School of Journalism and Mass Communication, an initiative of the Scripps Howard Foundation in honor of the late news industry executive and pioneer Roy W. Howard. Contact us at howardcenter@asu.edu, visit us on Twitter @HowardCenterASU.

PrevPreviousOpinion: The Elitists Who Want to Rule the World – Ben Shapiro
NextOpinion: Defining Justice Down — Our Courts Are in Crisis – Inside SourcesNext