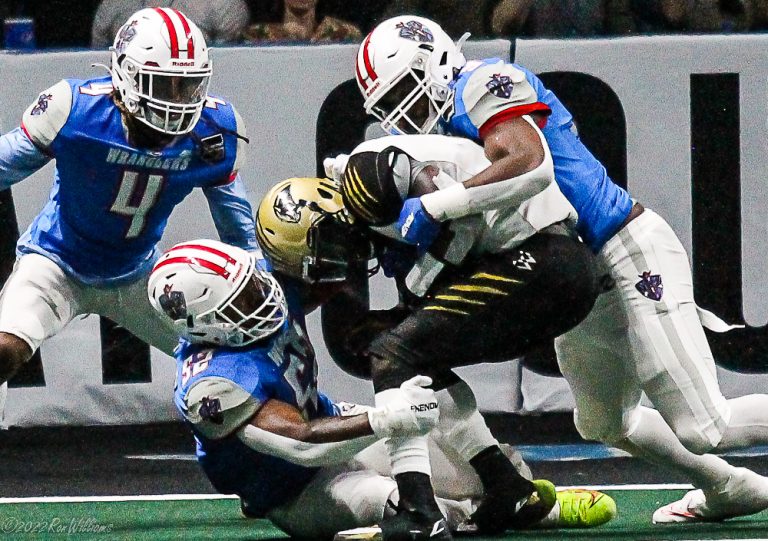 Photo:  52 Darin Hungerford and 93 Ulric Jones team up to bring down Panthers quarterback Joe Newman short of the goal line, with 4 Trae Meadows, in the second quarter

The Northern Arizona Wranglers completed a season sweep over the Bay Area Panthers with a 52-27 win  Saturday night, at the Findlay Toyota Center in Prescott Valley. Another good crowd was on hand to see a Wrangler team that has gone from the worst in the IFL to a tie for first. Yes indeed, with the Arizona Rattlers loss at home to the Frisco Fighters, the Wranglers and Rattlers are both sitting at 7-2 in the Western Division in the IFL. The two teams will meet for the first time this season on June 11 in Prescott Valley.

Despite being without two key players, receiver Quentin Randolph and defensive back Mercado Anderson, the Wranglers led from the beginning and were never threatened.

Quarterback Kaleb Barker started off the scoring on a 15 yard run five minutes in, and then went on to throw four TDs to lead the Wranglers. The Northern Arizona defense forced Bay Area into settling on a 28 yard Stevie Artigue field goal, making the score 7-3 with :14 left in the opening quarter. 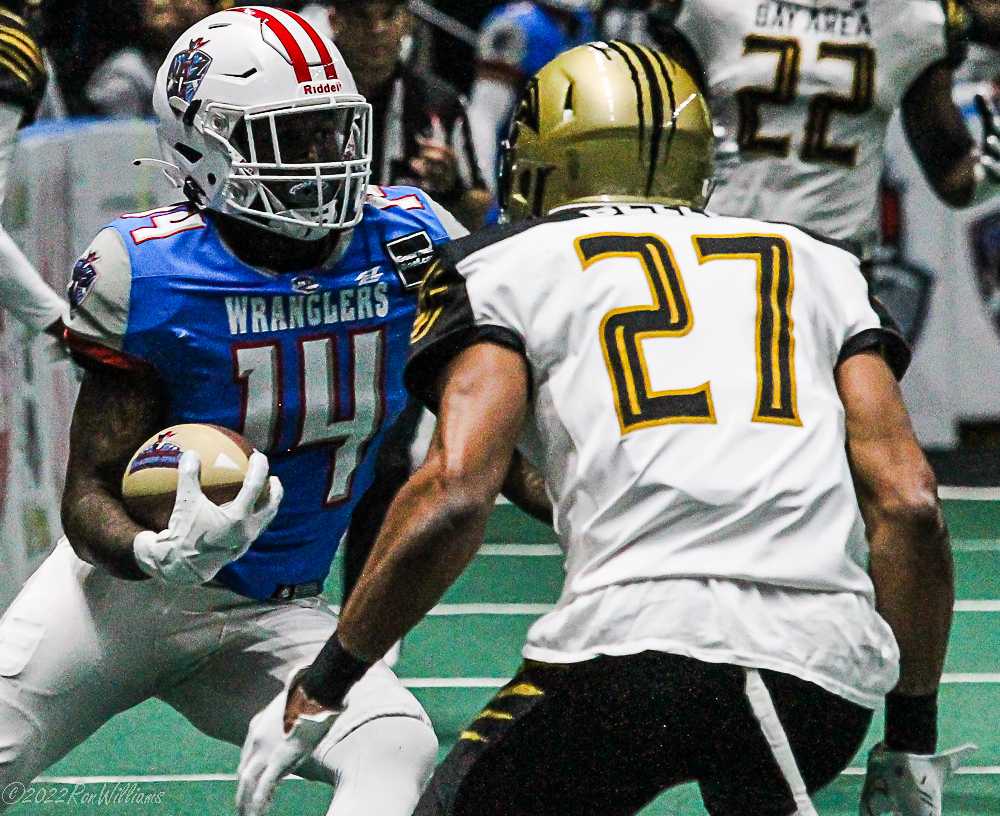 Glen Gibbons Jr. pulled in two Barker TD passes, for 10 and 11 yards, to increase the lead to 21-3, with 1:22 left in the first half. Bay Area was finally able to find the end zone in the final minute of the half, when Kam Pleasant caught a 19 yard pass from Joe Newman to trim the lead to 21-9.  The Wranglers responded with a Barker pass to Ulice Gillard as the half came to an end, with Northern Arizona on top 28-9 at the break.

The Panthers pulled within 12, at 28-16 on a Duane Gary five yard run, but Barker hit Ulice Gillard for his second TD of the game on a 12 yard strike, and the lead was 35-16. Bay Area was forced to settle for another field goal, before Barker hit Jerrime Neal on a 11 yard pass play for a 35-19 with 11:50 remaining.

Gary scored again on a six yard run, but the Wranglers defense had the final word after Israel Tucker scored from four yards out. First, another wild kickoff by Brandon Fischer bounced over the Bay Area returner, eventually being brought down by a swarm of Wranglers in the end zone for one point, then the sack by Darin Hungerford produced the final two points on a safety.

Hungerford, last week’s IFL defensive player of the week, had an equally good performance, topping his 10 tackles last week, with 11 last night, and a safety scoring sack of Joe Newman to end the game. Hungerford said, “We thought tonight it was us versus ourselves. We knew we had to come out strong, but we missed some plays. I thought I could have done better in some spots, but as a team we just continue to learn, work hard, and get better.”

Boom Williams, who was the new long snapper on the kicks last night, said, “I told coach that I could do it, and he trusted me with it. That gives me another way I can help the team out.”

The Wranglers will take their four game winning streak on the road to face the Sugar Skulls in Tucson, next Saturday at 6:05 pm. Each team has won at home thus far, Tucson won 72-62 on April 23, and Northern Arizona won 36-21 on May 14. The game can be seen on YouTube.