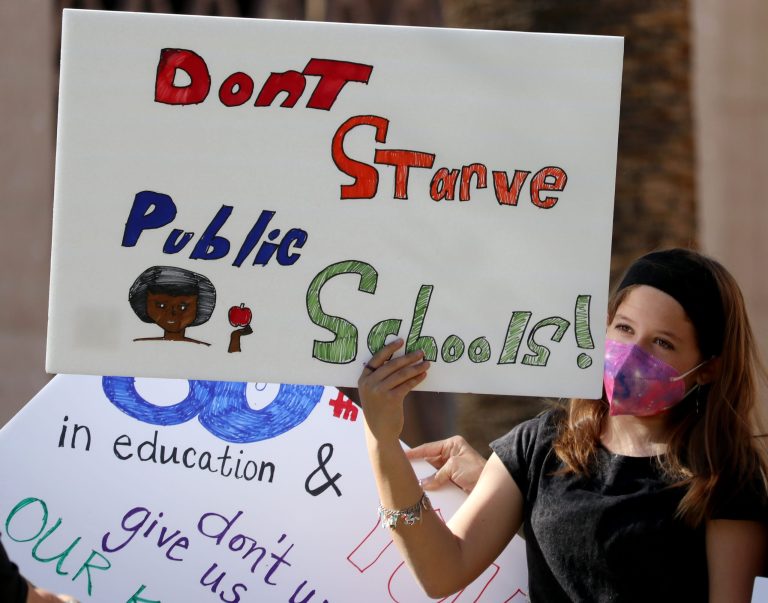 Arizona was again among the worst states in the nation for per pupil spending on K-12 education in 2020, a ranking that advocates said was embarrassing but not surprising.

The numbers from a recent Census Bureau report said Arizona spent $8,785 per pupil in 2020, ahead of only Utah and Idaho that year. And it was dead last – 51st among states and the District of Columbia – when it came to the amount spent on actual instruction, at $4,801 per pupil.

Both were well below the national average of $13,494 overall and $8,176 on instruction per pupil for that year.

The data “reflects the continued failure by Arizona’s legislature to appropriately invest in our state’s future,” a spokesperson for the Arizona Department of Education said in a statement.

But a spokesperson for Gov. Doug Ducey said the numbers “may not portray the complete picture of what’s happening in Arizona.” C.J. Karamargin said that higher spending does not equal a better educational system.

“If spending were a measure of success, then Washington, D.C., and New York would have the best educated kids in the country,” Karamargin said.

Many advocates remain frustrated by the state being historically and “generally underinvested” in public education in relation to the population, said Chris Kotterman, director of governmental relations for the Arizona School Boards Association.

That was echoed by Beth Lewis, the director of Save Our Schools Arizona, who said many teachers and those involved with the education system have “kind of gotten used to” the state’s low ranking on school funding.

“Schools are not able to afford a music teacher, an art teacher, a classroom aide,” said Lewis, who is also a teacher. “Teachers are trying to be everything; counselors, assistant principals, nurses.”

Arizona remains mired at the bottom of the rankings despite a 17.3% increase in per pupil funding between 2015 and 2020, according to the Census Bureau. But that still lagged behind the national average of an 18.5% increase during the period.

Advocates are hopeful – but not optimistic – that the situation will change next year, with the state sitting on a budget surplus that could be as high as $5.3 billion.

They also point to the will of the voters in the form of Proposition 208. Approved by voters in 2020, it would have dedicated more than $800 million in new taxes to schools in the first year, primarily to teachers’ salaries, but it has since been struck down in Arizona courts.

The Arizona Education Association has created an “educator’s budget” that calls for allocating up to $1.2 billion of ongoing revenue in the surplus to the public education system. It calls for increased spending on base salaries, full-day kindergarten, special education funding and career and technical education programs, among other initiatives.

Garcia said the fact that Arizona voters approved Prop 208 proves that low education funding in the state is “not aligned with the priorities of parents, teachers, students.”

But Kotterman said schools are likely to receive only a fraction of that request, although he hopes lawmakers can increase school funding closer to the $500 million to $700 million range.

The Legislature has until July 1 to approve a budget for fiscal 2023. The Arizona Education Department spokesperson said lawmakers “must pass a budget that supports fair pay for our state’s educators and meets the needs of every student in our classrooms.”

For now, advocates say, with teachers being forced to take on more and more in the classroom, many schools are struggling to hold it together.

“Arizona is not providing even close to an adequate amount of resources for our children,” Lewis said. “We know that our poor children definitely bear the brunt much worse than more well-off areas.”

The lack of funding has led many teachers to quit their jobs because of burnout, said Garcia, who said schools are being held together “with a Band-Aid and a prayer.” Kotterman said new teachers in Arizona often only last three to five years before leaving the profession.

“The trend is that teachers are leaving because they’re just so tired and they feel like they are not able to do the job anymore,” Lewis said.

In September 2021, 25.9% of teacher vacancies in Arizona schools remained unfilled and 55.4% of the vacancies were filled by teachers who did not meet the state’s standard certification requirements, surveys from the Arizona School Personnel Administrators Association showed.

Garcia said lawmakers need to listen to what voters said in passing Prop 208.

“It’s the voters who are behind this, they’ve passed propositions,” Garcia said. “If parents didn’t want schools to be starved, they wouldn’t be sending their kids to public schools.”

1 thought on “Arizona again near bottom of states for per pupil spending, Census says – Cronkite News”