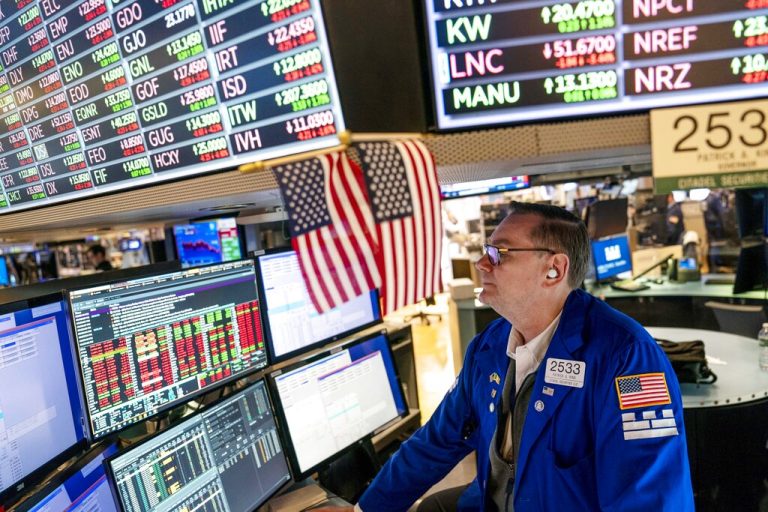 The Dow Jones Industrial Average sank more than 1,100 points and the S&P 500 had its biggest drop in nearly two years Wednesday, as big earnings misses by Target and other major retailers stoked investors’ fears that surging inflation could cut deeply into corporate profits.

The broad sell-off erased gains from a solid rally a day earlier, the latest volatile day-to-day swing for stocks in recent weeks amid a deepening market slump.

The S&P 500 tumbled 4%, its sharpest decline since June 2020. The benchmark index is now down more than 18% from the record high it reached at the beginning of the year. That’s shy of the 20% decline that’s considered a bear market.

The Dow dropped 3.6%, while the Nasdaq fell 4.7%. The three indexes are on pace to extend a string of at least six weekly losses.

“A lot of people are trying to guess the bottom,” said Sam Stovall, chief investment strategist at CFRA. “Bottoms occur when there’s nobody left to sell.”

Retailers were among the biggest decliners Wednesday after Target plunged following a grim quarterly earnings report.

Target lost a quarter of its value after reporting earnings that fell far short of analysts’ forecasts. In a sign of the impact of inflation, particularly on shipping costs, Target said its operating margin for the first quarter was 5.3%. It had been expecting 8% or higher. The company also said consumers returned to more normal spending habits, switching away from TVs and appliances and buying more toys and travel-related items.

The report comes a day after Walmart said its profit took a hit from higher costs. The nation’s largest retailer fell 6.8%, adding to its losses from Tuesday.

The weak reports stoked concerns that persistently rising inflation is putting a tighter squeeze on a wide range of businesses and could cut deeper into their profits.

“These retailers are having to balance how much of the higher inflation to pass on to consumers versus eating it, so that goes into questions about profitability on the part of companies and that gets to some of these lingering valuation questions for the market,” said Willie Delwiche, investment strategist at All Star Charts.

Technology stocks, which led the market rally a day earlier, were the biggest drag on the S&P 500. Apple lost 5.6%, its biggest decline since September 2020.

All told, more than 95% of stocks in the S&P 500 closed lower. Utilities fell, though not nearly as much as the other 10 sectors, as investors shifted money to investments that are considered less risky.

Bond yields fell as investors shifted money into lower-risk investments. The yield on the 10-year Treasury fell to 2.88% from 2.97% late Tuesday.

The disappointing report from Target comes a day after the market cheered an encouraging report from the Commerce Department that showed retail sales rose in April, driven by higher sales of cars, electronics, and more spending at restaurants.

Stocks have been struggling to pull out of a slump over the last six weeks as concerns pile up for investors. Trading has been choppy on a daily basis and any data on retailers and consumers is being closely monitored by investors as they try to determine the impact from inflation and whether it will prompt a slowdown in spending. A bigger-than-expected hit to spending could signal more sluggish economic growth ahead.

“To be sure, consumers continue to spend, but many of the top retailers are unable to pass along the higher labor costs and higher prices wrought by a still constrained supply chain,” said Quincy Krosby, chief equity strategist for LPL Financial.

Target warned that its costs for freight this year would be $1 billion higher than it estimated just three months ago. And Target and Walmart each provided anecdotal evidence that inflation is weighing on consumers, saying they held back on purchasing big-ticket items and changed from national brands to less expensive store brands.

The Federal Reserve is trying to temper the impact from the highest inflation in four decades by raising interest rates. On Tuesday, Fed Chair Jerome Powell told a Wall Street Journal conference that the U.S. central bank will “have to consider moving more aggressively” if inflation fails to ease after earlier rate hikes.

Investors are concerned that the central bank could cause a recession if it raises rates too high or too quickly. Worries persist about global growth as Russia’s invasion of Ukraine puts even more pressure on prices for oil and food while lockdowns in China to stem COVID-19 cases worsens supply chain problems.

The United Nations is significantly lowering its forecast for global economic growth this year from 4% to 3.1%. The downgrade is broad-based, which includes the world’s largest economies such as the U.S., China and the European Union.