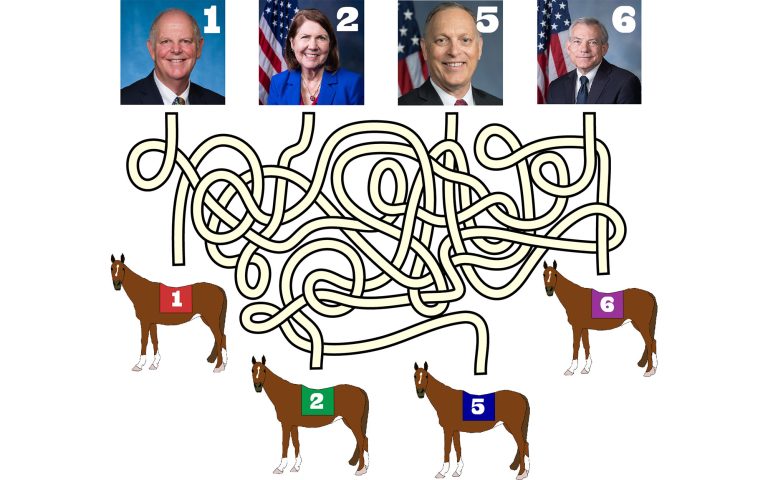 Illustration: Congressional campaigns are often compared to horse races, but in Arizona the jockeys and the horses were scrambled this year. Even without moving, seven of the state’s nine House members landed in newly numbered districts after redistricting. (Illustration by Camila Pedrosa/Cronkite News)

If you live in one of the other seven House districts, it may be time to pull out a pencil.

Those seven districts were numbered differently during this year’s congressional redistricting, even though the districts themselves stayed in mostly the same place on a map of the state.

One political analyst said Arizona is “sort of notorious” for shuffling district numbers around, but that has typically been because the state has added a new district every 10 years. Arizona did not gain a seat in Congress after the 2020 Census, however, the first time in 70 years that has happened.

“It seems a little weird that they would do this in the one cycle where they’re not gaining a seat and everything could have stayed relatively stable,” said J. Miles Coleman, associate editor for Sabato’s Crystal Ball at the University of Virginia Center for Politics.

“It’s definitely something that sort of sets Arizona apart,” he said.

Despite the many changes coming, leaders at election rights groups in Arizona said they have not heard much concern from voters on the new number of their districts. But they said voters still need to pay attention.

“Our recommendation to voters is check your registration, make sure you’re registered, check to see if you’re in a new district and if you are, then you need to educate yourself as to who the candidates are in your district,” said Alex Gulotta, the state director for All Voting is Local Arizona.

Thomas Collins, executive director of the Arizona Citizens Clean Elections Commission, said the commission is “definitely conscious of the need to call attention to the new districts.” It is pushing to educate voters by planning debates among primary candidates and publishing various materials aimed at introducing voters to their district’s candidates, he said.

But Coleman said he believes confusion may arise among people who are more likely to associate a district’s number with the current or former lawmakers who have held the seat, rather than its geographic location.

“(In 2018) I would see people saying, ‘OK, well, this district, you know, it’s really winnable for a Democrat, because this is the seat that Gabrielle Giffords used to hold last decade,’” he said. “I had to correct them … ‘Yes, I mean, Giffords did hold District 8 but at the time, District 8 was in the Tucson area.’”

The Tucson district that Giffords represented is now known as District 2, represented by Rep. Ann Kirkpatrick, D-Tucson. The current – and future – District 8 is Lesko’s, in the northwest Valley.

Although Coleman said he understands that shuffling numbers gives redistricting committees more freedom when they draw new congressional maps after congressional reapportionment, “as a political analyst, it drives me crazy.”

“I do think that there has to be some other way to do this, because just renumbering for the sake of renumbering seems silly, to be honest,” Coleman said.