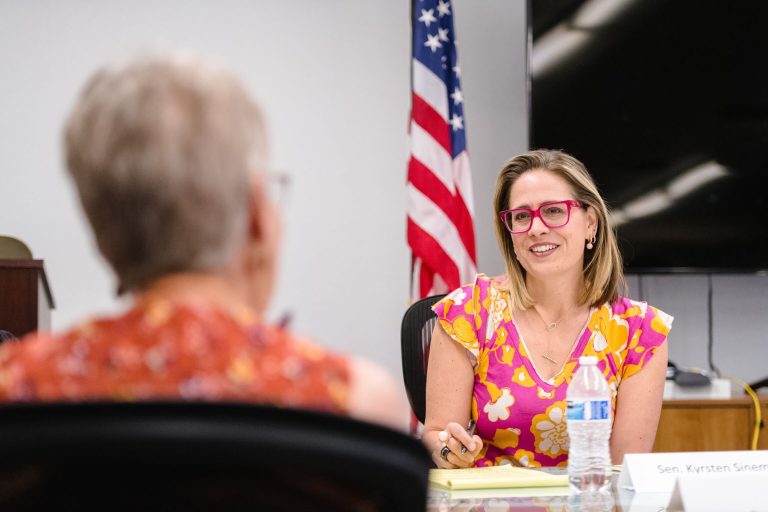 Arizona senior Senator Kyrsten Sinema hosted a roundtable with local leaders from across Yavapai County to discuss the region’s infrastructure funding priorities – including wildfire mitigation, water security, and transportation expansion – as she works to implement historic investments from her bipartisan infrastructure law.

“We’re working hand-in-hand with leaders across Yavapai County to ensure our bipartisan infrastructure law’s investments in wildfire mitigation and recovery, bridge and road repairs, airport improvements, and more go directly into the projects that need them,” said Sinema, co-author and lead negotiator of the Infrastructure Investment and Jobs law.

The roundtable follows the onset of fire season in Arizona, with the Crooks Fire burning nearly 10,000 acres south of Prescott. As Arizona experiences the most severe drought in 1,200 years, Yavapai County leaders emphasized the importance of wildfire prevention, mitigation, and cleanup for the region.

Sinema shared with local leaders how her historic Infrastructure Investment and Jobs law authorizes a once-in-a-generation $8.25 billion for wildfire management, resiliency, restoration, and natural resources-related infrastructure. Sinema’s historic bill secured for the Prescott National Forest a total of $28.7 million for forest treatment from 2022 to 2024 — with $11.1 million coming in 2022 alone. Additionally, earlier this year, Sinema announced a $61 million investment for wildfire prevention in Arizona for 2022, directly investing in Arizona for the implementation of 4FRI as well as critical recovery and mitigation projects. During the discussion, Sinema underscored how Arizonans rely on National Weather Service predictions and National Oceanic and Atmospheric Administration (NOAA) data to predict fire trajectory and determine impacts to landscapes and their families’ safety. Sinema’s bipartisan law includes $80 million for NOAA high-performance computing and $50 million for wildfire prediction, detection, and forecasting.

Specifically, Sinema secured $8.3 billion for Western Water, including $3.2 billion for the Aging Infrastructure Account and $250 million to fully fund the Drought Contingency Plan operations at Lake Mead for 5 years. In 2022 alone, Arizona will receive $109 million in funding from the Environmental Protection Agency to address clean and drinking water systems, update wastewater infrastructure, and help clean-up water contaminants like PFAS in communities across the state. In Yavapai County, Camp Verde School District and a local assisted living facility received $3 million from the Army Corps of Engineers to connect both facilities to the Yavapai-Apache Wastewater Treatment Plant to ensure more reliable service.

On formula funding alone, Arizona expects to receive about $903 million over five years to improve public transportation options across the state, representing a roughly 32% increase over 2021 FAST Act formula transit funding levels. Sinema’s law reauthorizes Federal Transit Administration programs for fiscal years 2022 through 2026. Like the highway programs, many of the transit programs are also based on formulas and flow directly to the transit agencies, just as they have in the past. Sinema pledged to work hand-in-hand with leaders on the ground to identify grants and programs for which they qualify, ensuring Arizona communities receive every dollar they’re due.

In another big win for Yavapai County, Prescott Regional Airport-Ernest A. Love Field is slated to receive $5,104,440 over the next five years from the infrastructure law in repairs and upgrades improving airport safety, convenience, and efficiency for Arizonans who fly. Of the $15 billion for airport improvement projects, Arizona will receive more than $360 million for airport infrastructure over the next five years.