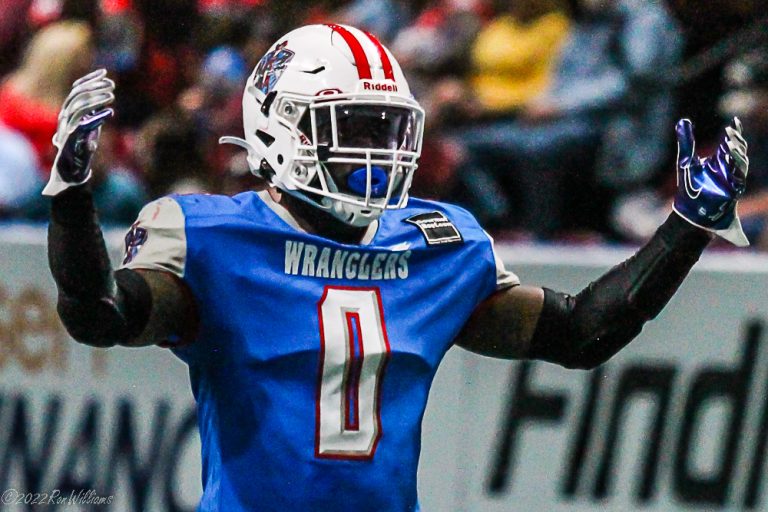 Photo: Boom Williams and the Wranglers return home to face Tucson on Saturday

The Northern Arizona Wranglers made it two in a row on the road, with a 45-18 thrashing of the Vegas Knight Hawks on Mothers’ Day. The Wranglers improve to (5-2) on the season and will play the next two weeks in the friendly confines of the Prescott Valley Events Center.

The first game of the season was a discouraging 22-9 road loss to the Knight Hawks, but after a big 30-20  home win over Vegas in week four, the table was set for the rubber match.

Vegas started off with their longest play from scrimmage this season, when quarterback Jerod Evans connected with Dez Epps, on a 42 yard scoring strike, to give the home team an early 6-0 lead. The Wranglers busted through the line on the PAT,  blocking the kick to keep the score the same.

Northern Arizona quarterback Kaleb Barker answered with a three yard run, and the Brandon Fischer’s extra point gave the Wranglers the lead 7-6, ending the scoring in the first quarter.

The Wranglers would score the next three touchdowns, making it four in a row to take a commanding lead. Israel Tucker scored on a three yard run, followed by a defensive TD, when Mercado Anderson picked up a loose ball and scampered 20 yards for another touchdown.  Quentin Randolph caught his only touchdown pass of the day on a three yard strike to give the Wranglers a 28-6 lead with just :12 left in the half. The Knight Hawks ended the half on a high note, with a 35 yard kickoff return by Elad Covaliu, but failed to get the two point conversion, as the teams headed to the locker room with Northern Arizona up 28-12.

The Wranglers would put two more touchdowns on the board in the third quarter when Barker hit Glen Gibbons for 13 yards, and Barker again, this time on a one yard rush.

Vegas put their final TD on the board with (:29 remaining as Evans ran it in from five yards out. Once again the two point conversion failed.

An added exclamation point to the scoreboard came on a 33 yard field goal by Brandon Fischer with under two minutes to play.

Vegas was lead by their quarterback Jerod Evans, who threw for 126 yards with one touchdown, and rushed for 38 with TD.

The Wranglers return home this Saturday to take on the Tucson Sugar Skulls. Game time is 6:05 pm at the Prescott Valley Events Center.