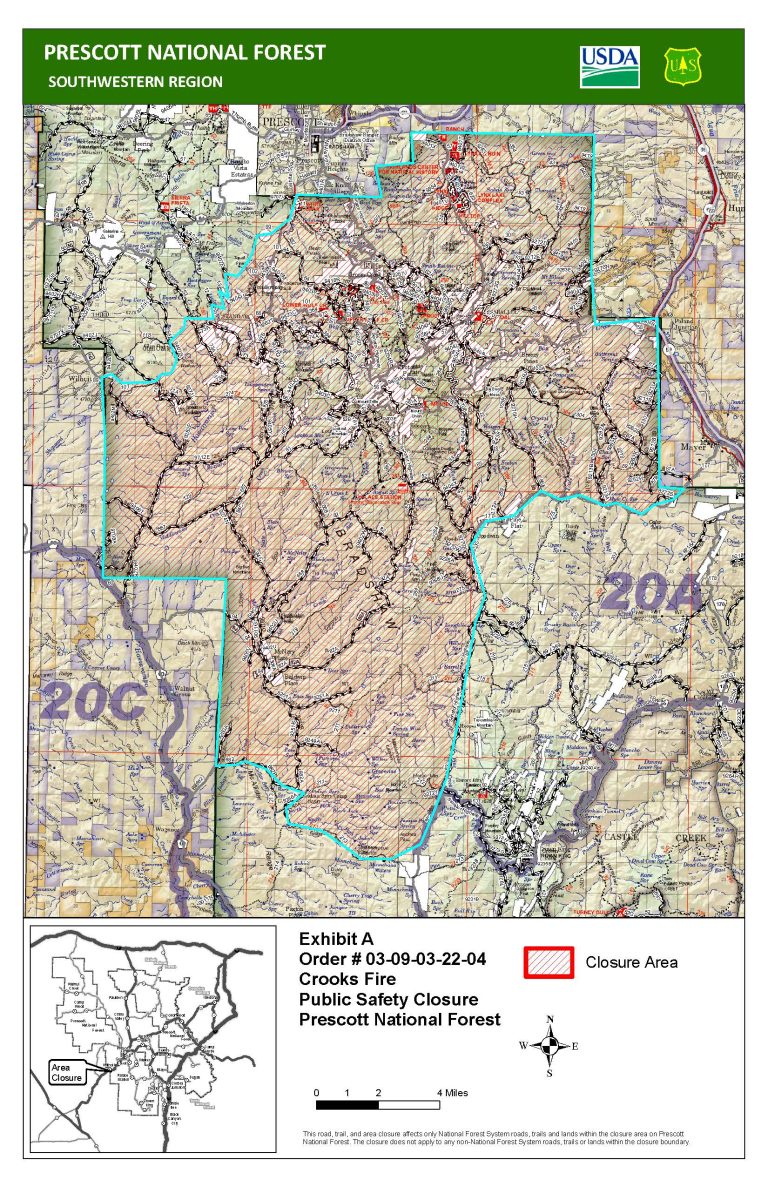 Fire suppression and repair work continues on the fire as crews build a contingency line in the Spruce Mountain-area. The contingency line acts as a secondary fire line and helps slow potential fire spread. It also provides for community safety due to the potential for increasing terrain driven winds pushing the remaining unsecured edge to the north and northeast. On Thursday, crews also picked up a flare up on the northwest side of the fire with the help of aircraft providing bucket work. Firefighters continue to patrol and monitor the perimeter of the fire checking for interior smokes and hot spots. As work continues, residents and visitors need to be aware of heavy equipment and firefighting resources traveling in and out of the area.

As a reminder, the Prescott National Forest has implemented a fire area emergency closure which ultimately provides for both public and firefighter safety. However, law enforcement and firefighters continue to find people hiking and off-roading within the closure area. While the fire remains 96% contained and fire activity has significantly decreased, hazards exist in and around the fire’s perimeter. Ash pits, stump holes, and downed trees can often go unnoticed by the public and create additional safety risks. The Upper and Lower Wolf Creek Campgrounds, Groom Creek Horse Camp, Ranch Trail #62, and Goldwater Lake remain closed. Watson Lake also remains closed as it continues to serve as base camp for fire crews and overhead.

Another round of critical fire weather is forecast for the fire area for the next few days. Warm temperatures, increased southwest winds and low humidity levels play a role in fire activity and behavior. Firefighters remain vigilant ahead of the critical fire weather and have crews staged to provide for initial attack should a new start occur. Also, Stage 1 fire restrictions are in place on both the Prescott National Forest and State Trust Lands within Yavapai County. Detailed fire restriction information can be found at: WildlandFire.az.gov

WEATHER: Ridgetop winds will increase after the inversion breaks between 9:30-10:00 a.m. with afternoon gusts increasing to 25-30 mph after noon. Poor humidity recoveries are expected again tonight. Red Flag conditions are likely Saturday and potentially into early next week due to very dry conditions and strong southwest winds

A Temporary Flight Restriction (TFR) is in place: Wildfires are a NO Drone Zone. Flying recreational and media drones within a TFR is illegal and impedes fire suppression efforts. Report drones to local law enforcement. If You Fly, We Can’t.