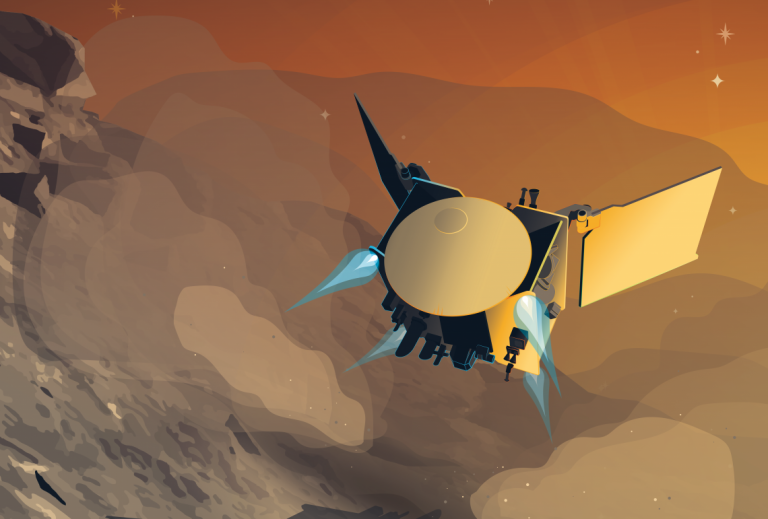 Because of the potential to deepen our understanding of the solar system and beyond, NASA this week extended the missions of eight of its spacecraft, including OSIRIS-REx—and NAU planetary geologist Chris Haberle will be one of the scientists involved in the newly extended project.

OSIRIS-REx (Origins, Spectral Interpretation, Resource Identification, Security-Regolith Explorer) originally launched in 2016 and was the first NASA mission to collect a sample from the near-Earth asteroid Bennu in 2020. The spacecraft is on its way back to Earth to deliver the sample, which will help scientists learn about the formation of the solar system and Earth as a habitable planet.

The mission will make its first maneuver toward Apophis 30 days after the OSIRIS-REx spacecraft delivers the Bennu sample to Earth in September 2023. At that point, the original mission team will split —the sample analysis team will analyze the Bennu sample while the spacecraft and instrument team transitions to OSIRIS-APEX (OSIRIS-Apophis Explorer).

According to NASA, “with a new name to reflect the extended mission’s new goals, the OSIRIS-APEX team will redirect the spacecraft to encounter Apophis, an asteroid roughly 1,200 feet (370 meters) in diameter that will come within 20,000 miles (32,000 kilometers) of Earth in 2029. OSIRIS-APEX will enter orbit around Apophis soon after the asteroid’s Earth flyby, providing an unprecedented close-up look at this S-type asteroid. It plans to study changes in the asteroid caused by its close flyby of Earth and use the spacecraft’s gas thrusters to attempt to dislodge and study the dust and small rocks on and below Apophis’ surface.”

The University of Arizona, which has been leading the OSIRIS-REx mission, also will lead the OSIRIS-APEX mission, with planetary scientist Daniella DellaGiustina as principal investigator.

When it reaches Apophis, OSIRIS-APEX will study the asteroid for 18 months and collect data along the way, although it will not collect a sample. It also will approach the surface and fire its thrusters, a maneuver designed to expose the asteroid’s subsurface, which will enable mission scientists to learn more about the asteroid’s material properties and composition. Apophis is about the same size as Bennu—nearly 1,000 feet at its longest point—but it differs in what’s called its spectral type. Bennu is a B-type asteroid linked to carbonaceous chondrite meteorites, whereas Apophis is an S-type asteroid linked to ordinary chondrite meteorites.

OSIRIS-REx veterans to train the next generation of leaders

As a key element of the extended mission, OSIRIS-REx veterans will work closely with early career scientists as mentors in the early mission phases. By the time the spacecraft arrives at Apophis, the next generation will step into leadership roles on OSIRIS-APEX.

He will serve as OTES instrument scientist and will lead the instrument’s science operations planning, a position where he has experience, and he will work with Vicky Hamilton of the Southwest Research Institute and Phil Christensen of Arizona State University as his mentors.

The OTES (OSIRIS-REx Thermal Emission Spectrometer) provides mineral and temperature information by measuring the infrared spectral radiance of asteroid surfaces. In the infrared, most minerals have unique spectral signatures that are like fingerprints. By understanding which minerals correspond to specific spectral signatures, scientists can determine the minerals that are present on the surfaces of Bennu and Apophis.

“I’ve been with the OSIRIS-REx project since 2010 and throughout the prime mission I worked closely with the science planning and operations team at the University of Arizona,” he said.

To support this work, NASA has awarded Haberle $3.1 million, which includes funds for two full-time graduate students, one postdoctoral scholar and one part-time operations specialist.

“These folks would join me prior to the Apophis approach and will be trained to work with the science operations team at UA like I was when we prepared for the Bennu approach,” Haberle said. “It was such a fantastic experience to be embedded with a NASA spaceflight team as we explored a never-before-seen object in real time, and I want to share that. We’ve made sure that there is support in the budget to have these students on site for key portions of the 18-month Apophis rendezvous, and I’m thrilled to be able to share that experience with a new generation of scientists.”

Beyond operations, Haberle’s cohort will also work with the APEX science team to interrogate the surface of the asteroid Apophis. “I will also have a science-focused role, as a mission co-investigator, working with my team to model the thermophysical properties of Apophis using OTES data. We’ll use that information to make physics-based corrections to the spectral data to improve our ability to interpret surface mineralogy.”

Other NAU scientists involved in OSIRIS-REx

Haberle isn’t the first NAU scientist involved in the mission. Professor Joshua Emery was a member of the OSIRIS-REx science team and lead of the thermal analysis working group, and he co-authored several papers detailing the team’s studies. Assistant professor Cristina Thomas was also a team member on the mission.