Information about the Whiskey Off-Road Event April 29-May 1, 2022 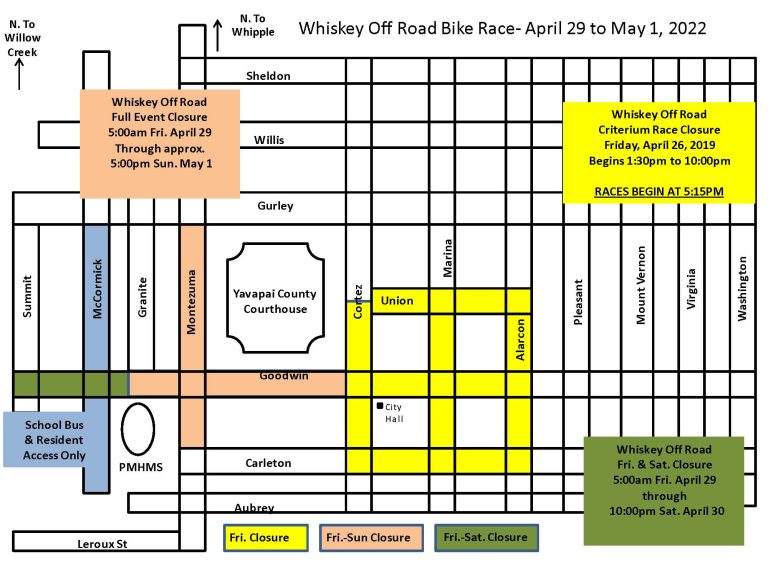 Plans are moving forward for the Whiskey Off-Road mountain bike event scheduled for April 29 through May 1 in Prescott. The City of Prescott (including the Prescott Fire Department and the Prescott Police Department), Yavapai County Sheriff’s Office, Yavapai County Emergency Management, and Epic Rides, have been working in close coordination with the officials from the Prescott National Forest as well as the Incident Management Team assigned to the Crooks fire.

We have been regularly evaluating all aspect of the impacts of the fire on the event, including discussions around smoke, emergency response, camping/hotels, public information, and course routes. Our number one priority is life and safety – for the first responders, for community members, for ride participants, and for visitors/spectators. We are evaluating the Crooks Fire daily as the overarching driver for shared decision making regarding the Whiskey Off-Road. We are also ensuring timely, relevant information is shared via several venues regarding the status of the fire, public safety information (evacuation areas and closed areas), as well as air quality information. Everyone involved has stressed that this is a very dynamic situation, and they urge citizens, race contestants and visitors to monitor the situation closely.

As of this time, the scheduled routes for the three-day race are not in the forest closure area. The City of Prescott remains fully open, and no part of the City is currently under any type of evacuation order. A number of dispersed camp sites and recreation areas on the Prescott National Forest, have been affected by closures. Visitors can obtain additional information by visiting the Prescott National Forest Website: http://www.fs.usda.gov/prescott/ or by following them on Facebook or Twitter.

“Our staff, firefighters and police have been working very closely with Prescott National Forest and the Incident Management Team to assess any possible threat the fire may cause to the City and to the event,” said Mayor Phil Goode.  “Based on their assessment, I have a very high degree of confidence that this event can be held safely for citizens, contestants and visitors. Of course, we will continue to monitor the situation, and we will be ready to act if conditions change.”

The greatest possible impact to the event is likely to be smoke from the fire. At times, air quality may be unhealthy.  The Incident Management Team and Prescott National Forest will have an air quality monitor stationed at the Courthouse Plaza throughout the weekend.  Prescott National Forest will assign personnel to be at the event to answer questions the public may have.  There is also a link for real-time monitoring of smoke in the area.

Many of the spectator events and activities are centered around Whiskey Row and the  Court House Plaza downtown.

Street Closures for the Event

Friday, May 29 to Saturday, May 30- The following streets will be closed or allow for limited access beginning at 5:00am on Friday, April 29 to approximately 7:00pm on Saturday, April 30

Visitors and spectators are asked to recreate responsibly in the area, and to be aware of changing conditions.