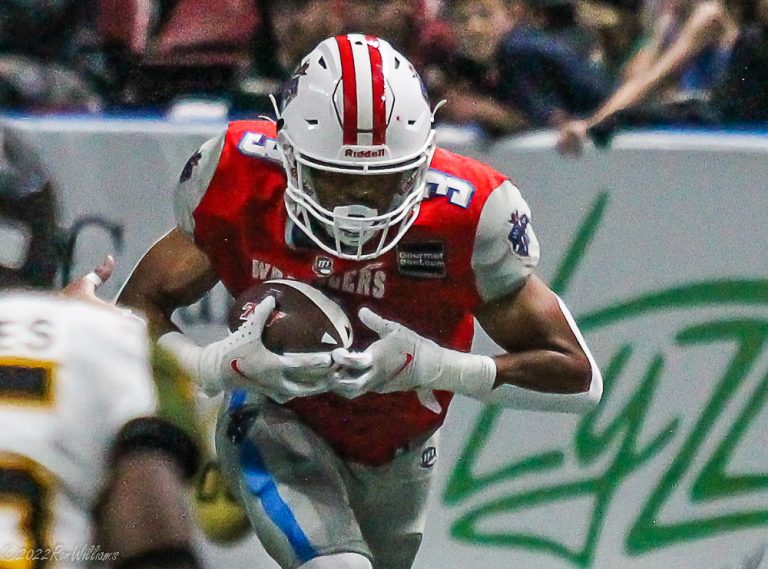 The Northern Arizona Wranglers had not given up more than 28 points in any of their first four games this season, but the Tucson Sugar Skulls exploded with 42 first half points on their way to a  72-62 win over the Wranglers.

The defenses had little to say the entire night, but a turnover here and there ended up being the difference.

The Wranglers answered the call with a Kaleb Barker pass to Quentin Randolph, his first of six touchdowns on the night.

Tucson went up 14-7, needing just two plays as Neal hit Thompson for a 48 yard scoring strike. Northern Arizona would turn the ball over on downs. The Sugar Skulls increased their lead to 21-7 two minutes into the second quarter when Neal ran the ball in from 8 yards out.

Northern Arizona closed the deficit to 21-14 on a 1 yard pass from Barker to Boom Williams. Once again Tucson scored to go up 28-14 on a 28 yard Neal pass to Quinton Pedroza.

The Wranglers would score the next two touchdowns to trim the Sugar Skull lead to 28-27. First, Randolph rushed in from 16 yards out, then an onside kick and recovery, set northern Arizona up for what could have been the tying score. Barker zipped a pass to Randolph for a 38 yard touchdown, but the PAT missed, leaving Tucson up by one 28-27.

A good kickoff return to the Wranglers 9 set up the next TD for the home team. Two plays later Jones bolted into the corner of the end zone to up the Tucson lead to 35-27.

Maurice Jackson drifted back and came up with pick six from the 16 yard line on a pass from Barker to put the Sugar Skulls up 42-27 with 23 seconds left in the half.

Barker rolled out and hit Glen Gibbons Jr. for a 25 yard touchdown on the last play of the half to close the deficit to 42-33, after a second consecutive missed PAT.

The Wranglers recovered a Sugar Skull fumble at the Tucson 18. Barker hit Randolph again as Randolph went high to get the ball and fell over the boards holding onto the ball in the process to close the gap to 42-40 with 8:58 left in the third.

Harrington Thompson threw a 17 yard pass from 2, but the first missed extra point of the game for Tucson followed, increasing the Sugar Skull lead to 48-40.

Randolph scored his fifth touchdown of the game on a 15 yard sweep, and with a Fischer kick closed the gap to 48-47 with 3:22 remaining in the third.

Fischer kicked a line drive into a Sugar Skull 3, who was fortunate enough to recover it at the NAZ 10 yard line. The defense nearly held, but Neal weaved his way into the end zone on a 4th and 10 play, increasing the lead to 55-47.

The Wranglers’  fumbled the kickoff return as the third quarter ended, setting up the Tucson offense again. Neal called his own number for a nine rushing touchdown, increasing the lead to 62-47 with 13:57 left.

Randolph recreated his flip after the catch over the boards, on another strike by Barker, this time  from 22 yards out. A good kick closed the gap to 62-54 with 10:47 remaining.

The NAZ defense came up big with their first sack of the game by Vada King, forcing a field goal attempt. Logan Justus drilled a 45 yard field goal, and Tucson led 65-54 at the 6:55 mark.

Randolph caught yet another touchdown pass from Barker. Randolph then ran the end around for the two point conversion to close the deficit to 65-62 with 5:19 left.

It looked like the Wranglers defense was going to make a big stop after JaQuan Artis sacked Neal back at the four yard line, but the following play Neal stepped up and drilled a pass to Thompson setting up another score. Mike Jones ran around the end for a six yard touchdown run, setting a Tucson team scoring record. Once again it was a two score game, 72-62. This time with just 2:13 left.

A missed field goal ended the Wranglers chances. Tucson improves to (2–3). Northern Arizona (3-2), will play another road game versus the Bay Area Panthers on Sunday at 5:05pm. You can watch the game on YouTube.

PrevPreviousBattle for Life: Prescott Oncologist Uses Own Experiences Battling Cancer to Support, Empower Patients
Next5 Strategies that can help you Protect Your Business From InflationNext