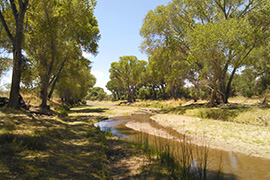 Two Arizona rivers landed on an annual list of the top 10 “most endangered” rivers in the U.S. this week, including the drought-ravaged Colorado in the No. 1 spot.

The San Pedro River in southern Arizona made eighth place on the list because of groundwater pumping that has caused once-free-flowing sections of the river to dry up, said American Rivers, the group that released the report.

It said the Colorado was already “over-tapped” by demands from farms, businesses and homes, before the current megadrought that is “seriously impacting the environment and the economy from the headwaters to the sea.” The report said Colorado provides drinking water for 40 million people and waters 5 million acres of farmland across seven states.

“There is not enough water to meet all the current needs,” said the report. “The entire system is operating at a deficit, and climate change is expected to further reduce the river’s flow by 10 to 30% by 2050.”

Even if the drought eases up, the long-term outlook is grim, said Matt Rice, Southwest regional director of American Rivers.

Rice called the Colorado the “lifeblood” of the Southwest, with the report noting that in addition to drinking water, the region served by the river has a $1.4 trillion economy that includes $26 billion in recreational spending.

This is not the first time the Colorado has been on the American Rivers list – it was also No. 1 in the 2013 report. The biggest difference between now and then is that millions more people rely on the river now in a region that is eight more years into a 22-year drought.

Scientists say the current “megadrought” may be the driest in more than 1,200 years in the Southwest. The lack of rainfall and snowpack has been compounded by higher temperatures, which make it harder for the soil to retain any moisture that might fall.

Lake Powell and Lake Mead have fallen to historic lows, threatening not only the water drawn from those reservoirs but also their ability to generate hydropower. The falling water levels triggered a multistate drought-contingency plan last year that has already cost Arizona a portion of its Colorado River water.

Kevin Moran, the associate vice president for regional affairs for the Environmental Defense Fund, said a couple good water years are not going to suddenly fix the river’s problems, and state and federal officials need to start planning for that.

“We have to start with a new mindset that is based on and aligned with the new water reality,” Moran said.

While a lack of surface water is the problem for the Colorado River, the San Pedro River in Southern Arizona faces a different issue: Area residents are pumping too much of the groundwater that keeps the river flowing in dry times, the report said.

“Groundwater levels across much of the river’s sub-watershed are declining due to ever-increasing human and agricultural uses,” the report said. “Stretches of river that previously flowed year-round are drying up.”

That was echoed by Julián González, legislative counsel for Earthjustice, who called groundwater flows “directly connected to surface water river flows.” He said working to preserve the rivers is not a partisan issue, but one everybody can get behind.

In a statement Thursday, Rep. Ann Kirkpatrick, D-Tucson, called the San Pedro “the last free-flowing river in the Southwest, and it is hugely important to our entire region … Our area must continue working together to keep this lifeline for current and future generations.”

The report called for both infrastructure and policy action to address the problems.

For the Colorado, that could mean taking some of the $8.3 billion dedicated to Western water projects in the $1.2 trillion Infrastructure Investment and Jobs Act and using it for “climate resiliency.” It would also mean shifting plans to account for a drier, hotter climate in the future.

The report said Arizona needs to pass stricter groundwater-pumping laws to protect the San Pedro. The river would also be helped by restoration of clean-water regulations, overturned by the Trump administration, that give greater protection to smaller, and sometimes dry, waterways.

Moran said the report is meant as a “call for action.”

“This report is a blazing alarm for all of us to think about how we can do more to conserve water to protect the river and the values that that it brings across the whole basin,” he said.

In addition to keeping an eye on policy, experts said people can help by working to cut back the water they use in their households.

“The more people work together on fighting back and advocacy, then the more likely we are to get the protections to where they’ve got to be for the future,” González said.

And it’s in everyone’s interest to act, he said.

“These waterways are so interconnected. And, you know, everyone’s for the most part downstream from someone,” he said.