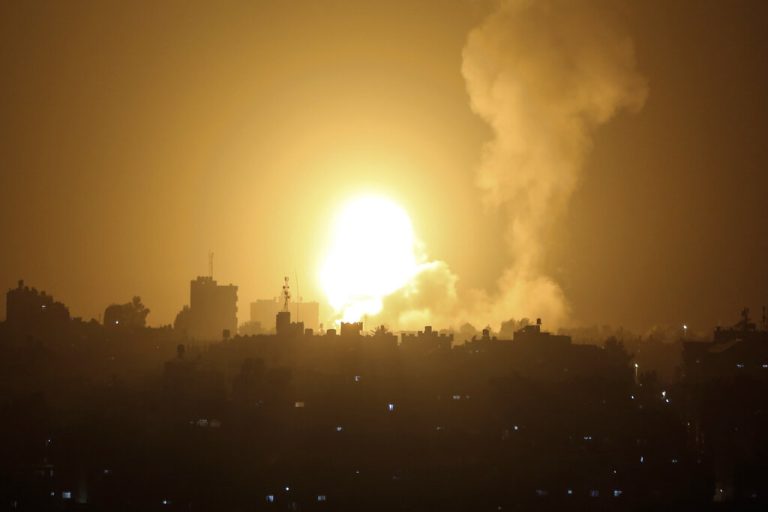 Photo: An explosion is caused by Israeli airstrikes on a Hamas military base in town of Khan Younis, southern Gaza Strip

Palestinians fired several rockets into southern Israel from the Gaza Strip early Thursday as Israeli aircraft hit Gaza militant sites soon after an earlier rocket strike that was the second such attack this week.

The cross-border Gaza violence was an extension of Israeli-Palestinian tensions that have been boiling in Jerusalem.

The Israeli military said four rockets were fired from Gaza early Thursday and were intercepted by air defenses. Late Wednesday, a rocket was fired from Gaza, triggering Israeli airstrikes.

There were no immediate reports of casualties or damage, and no one claimed the rocket strikes. Israel holds the Hamas militant group that rules Gaza responsible for all rocket fire and typically responds with airstrikes within hours.

Early Thursday, Israeli warplanes conducted a series of airstrikes at a Hamas military site in the central Gaza Strip, local media reported. Social media posts by activists showed smoke billowing in the air. The Israeli military said the airstrikes were aimed at a militant site and an entrance of a tunnel leading to an underground complex holding “raw chemicals” to make rockets.

The Israeli military said later that its planes attacked another Hamas compound after an anti-aircraft missile was fired from Gaza during the initial airstrikes. It said the missile failed to hit its target and no injuries or damage were reported from the anti-aircraft missile.

Hamas had earlier issued vague threats over a planned march through Jerusalem by Israeli ultra-nationalists. But Israeli police blocked roads and prevented the marchers from reaching dense Palestinian neighborhoods in and around the Old City, after a similar event nearly a year ago helped trigger an Israel-Gaza war.

Police used parked trucks and barricades just outside the walls of the Old City to close the main road leading down to Damascus Gate, the epicenter of last year’s unrest. After some pushing and shoving with police, the marchers rallied near the barricades, waving flags, singing and chanting.

Israeli police deployed in large numbers around the historic Old City, home to major religious sites for Jews, Christians and Muslims, out of concern that confrontations could further inflame an already tense situation during the Jewish holiday of Passover and the Muslim holy month of Ramadan.

Tensions have surged in recent weeks after a series of deadly attacks inside Israel, followed by military operations in the occupied West Bank. On Monday, Palestinian militants fired a rocket from the Gaza Strip into Israel for the first time in months, and Israel responded with airstrikes. That rocket was intercepted and there were no casualties from the exchange.

It came after repeated clashes between Israeli police and Palestinians at the Al-Aqsa mosque compound, known to Jews as the Temple Mount.

The hilltop shrine in Jerusalem’s Old City is the third holiest in Islam, while for Jews it is their holiest site, where two temples stood in antiquity. It is the emotional ground zero for the Israeli-Palestinian conflict and a flashpoint for previous rounds of violence.

Earlier on Wednesday, a small group of Palestinian protesters threw rocks at police while hundreds of Jewish visitors entered the flashpoint holy site.

Amateur video from the scene appeared to show police using sponge-tipped plastic projectiles intended to be non-lethal as the protesters barricaded themselves inside the mosque. Police said a firebomb thrown by one of the protesters set a carpet outside the mosque on fire, but it was quickly extinguished. No injuries were reported.

Hamas said Wednesday ahead of the march that Israel would bear “full responsibility for the repercussions” if it allowed the marchers “to approach our holy sites,” without elaborating.

Itamar Ben Gvir, an ultra-nationalist lawmaker who frequently stages provocative visits to Palestinian areas, attended the rally and was greeted with cheers. He is a disciple of a radical rabbi whose violently anti-Arab ideology was once shunned in Israel but is now having a revival.

Israeli Prime Minister Naftali Bennett said in a statement that he would bar Ben Gvir from going to Damascus Gate. “I don’t intend to allow petty politics to endanger human lives,” he said.

Last May, Palestinian militants in Gaza fired rockets toward Jerusalem as a much larger group of thousands of Israelis held a flag march to the Old City following weeks of protests and clashes in and around Al-Aqsa. Those events led to an 11-day war between Israel and Hamas.

Israeli nationalists stage such marches to try to assert sovereignty over east Jerusalem, which Israel seized in the 1967 Mideast war, along with the West Bank and Gaza, and annexed in a move not recognized internationally. The Palestinians seek an independent state in all three territories and consider east Jerusalem their capital.

Organizer Noam Nisan defended the march in an interview with Kan public radio before it was held, saying: “A Jew with a flag in Jerusalem is not a provocation.”

He said the demonstration was a response to Palestinians pelting buses with stones just outside the Old City earlier this week. The attack happened near an entrance leading to the Western Wall, the holiest site where Jews can pray, which is next to Al-Aqsa.

PrevPrevious‘Days or hours left’: Russia tightens the noose in Mariupol
NextWind will be a force to reckon with on Southwest wildfiresNext