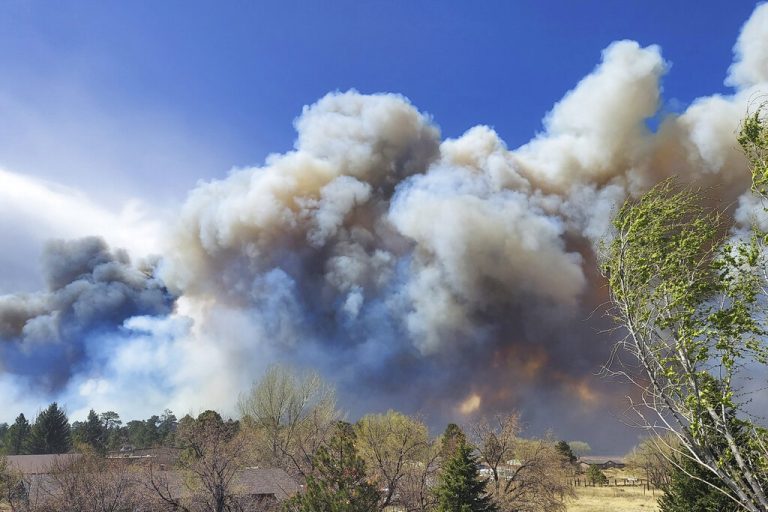 [Editor’s Note: InciWeb is calling this the Tunnel Fire.]

Winds kicked up a towering wall of flames in rural northern Arizona on Tuesday, tearing through two-dozen structures and forcing the evacuation of more than 700 homes.

Coconino County declared an emergency Tuesday as the fast-moving wildfire outside of the Northern Arizona University college town of Flagstaff ballooned to over 9 square miles (23 square kilometers) Tuesday, Sheriff Jim Driscoll said during a news conference.

A couple of hundred homes are still threatened as smoke billowed into the air in an all-too-familiar scene. Residents recalled scrambling to pack their bags and flee a dozen years ago during a much-larger wildfire burned in the same area.

Driscoll said the sheriff’s office got a call saying a man was trapped in his house, but that firefighters couldn’t get to him. They do not know if he survived.

Flame lengths are as high as 100 feet (30 meters), the U.S. Forest Service said. Firefighters on Tuesday were up against 50 mph (80 kph) gusts that pushed the wildfire over the highway and weren’t expected to let up much this week, authorities said.

About 200 firefighters were working the blaze that appeared to be moving northeast away from the more heavily populated areas of Flagstaff, toward Sunset Crater Volcano National Monument and volcanic cinders, said Coconino National Forest spokesman Brady Smith.

“It’s good in that it’s not headed toward a very populated area, and it’s headed toward less fuel,” he said. “But depending on the intensity of the fire, fire can still move across cinders.”

A top-level national fire management team is expected to take over later this week.

Fire and law enforcement agencies that were knocking on doors to warn of evacuations Tuesday were forced to pull out to avoid getting trapped by the flames, Paxton said. Arizona Public Service Co. shut off power to about 625 customers to keep firefighters safe, a spokeswoman said.

Red flag warnings blanketed much of Arizona and New Mexico on Tuesday, indicating conditions are ripe for wildfires. Residents in northern New Mexico’s Mora and San Miguel counties were warned to be ready to evacuate as wildfires burned there amid dry, warm and windy conditions.

The National Interagency Fire Center reported Tuesday that nearly 2,000 wildland firefighters and support personnel were assigned to more than a dozen large wildfires in the Southwestern, Southern and Rocky Mountain areas. Scientists say climate change has made the U.S. West much warmer and drier in the past 30 years and will continue to make weather more extreme and wildfires more frequent and destructive.

The fire in Flagstaff was estimated at 100 acres (40 hectares) early Tuesday but quickly grew to 9.3 square miles (24 square kilometers), scorching timber and grass. It started Sunday afternoon 14 miles (22 kilometers) northeast of the city nestled in the largest contiguous Ponderosa pine forest in the U.S. Investigators don’t know yet what caused it and have yet to corral any part of the blaze.

The Arizona Department of Transportation shut down a section of U.S. 89, the main route between Flagstaff and the far northern part of the state, and a primary route to and from Navajo Nation communities, because of the wildfire. Various organizations worked to set up shelters for evacuees and for animals.

Ali Taranto rushed to Flagstaff from Winslow, where she works at a hospital, to check on a property she owns that was threatened by the wildfire. She also was getting messages to check on a neighbor who she found didn’t have access to oxygen while the power was out and didn’t have the strength to manually open her garage door to evacuate.

Taranto said the neighbor was “disoriented and gasping for air” when she reached her. Firefighters in the area helped get the garage door open and the neighbor to the hospital, she said. Taranto was looking for a shelter for the neighbor’s two dogs.

By the time Taranto left the area, the highway into Flagstaff was shut down and she had to drive an extra two hours back home. At least two other neighbors didn’t evacuate, she said.

“To see flames several yards away from your property line and to hear the propane tanks bursting in the background, it was very surreal,” Taranto said. “Ash falling down. It was crazy.”

The wind is expected to be a challenge the rest of the week, along with warmer-than-average weather and low humidity, the National Weather Service said.

“I don’t see any significant decreases in wind, I don’t see any big bump ups in humidity and, at this point, we’re not really expecting any precipitation either,” said meteorologist Robert Rickey.

Elsewhere in Arizona, firefighters battled a wildfire in a sparsely populated area of the Prescott National Forest about 10 miles (16 kilometers) south of Prescott. The cause of the 600-acre (2.4 square-kilometer) wildfire was under investigation.

Some communities were evacuated and a shelter set up at Yavapai College.

In southern Arizona, a principal highway route between Bisbee and Sierra Vista reopened Tuesday after being closed for about eight hours overnight due to a brush fire in the hills overlooking Bisbee.

PrevPreviousCalifornia inmates study at 1st college based behind bars
NextOpinion: The COVID-19 Authoritarians Panic over the End of the Mask Mandates – Ben ShapiroNext