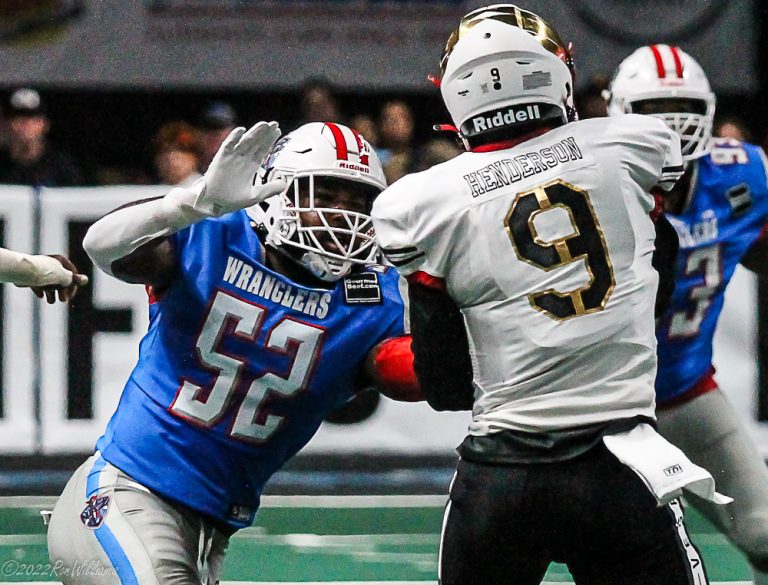 Mercado Anderson’s two pass interceptions in the fourth quarter keyed the Northern Arizona Wranglers to a 30-20 win over the Vegas Knight Hawks, in Prescott Valley on Saturday night.

Anderson’s first interception was a pick six with just over thirteen minutes left, and the second sealed the deal with under a minute to play. Anderson said, “My defensive coach came out with a great game plan. Our defensive line did it tonight, putting the pressure up front, giving us all in the secondary chances to make plays. It was great to come back and beat those guys after the loss up there. We know we are a better team than that, and it showed tonight.”

The Wranglers fell behind 3-0 as the NAZ defense stopped the Vegas offense on their opening drive, forcing an early field goal. Northern Arizona struck like lightning on their very first play from scrimmage as Kaleb Barker drilled Quentin Randolph in stride as he crossed the goal line. Brandon Fischer added the extra point, for a 7-3 lead with 8:20 left in the opening quarter.

The next three series, two by Vegas resulted in long field goal attempts, all in which missed. It was not till 5:20 left in the half that there was a change in the score. The Knight Hawks Elad Covaliu was the recipient of a 14 yard TD pass from quarterback Javahn Henderson to give Vegas a 10-7 lead.

The Wranglers’ offense struggled through the remainder of the half, but threatened, coming up a yard short as the clock ran out to end the half.

The opening drive of the third quarter put the Wranglers back on top as Boom Williams took a Kaleb Barker pass to the house for a 25 yard touchdown and a 13-10 lead. The Wranglers defense led by Ulric Jones once again held the Knight Hawks forcing a 23 yard field goal by Kohorst to tie the game at 13 with 7:07 left in the third quarter.

A second Williams touchdown, a two yard run, put the Wranglers back on top 20-13 as the third quarter came to an end. Williams said about this about the second half turn around, “What changed for us this time is that we remembered how we played up there, (a 22-9 loss), and knew we are a better team than that. Plus making a couple of adjustments, helped us to have a much better second half.” 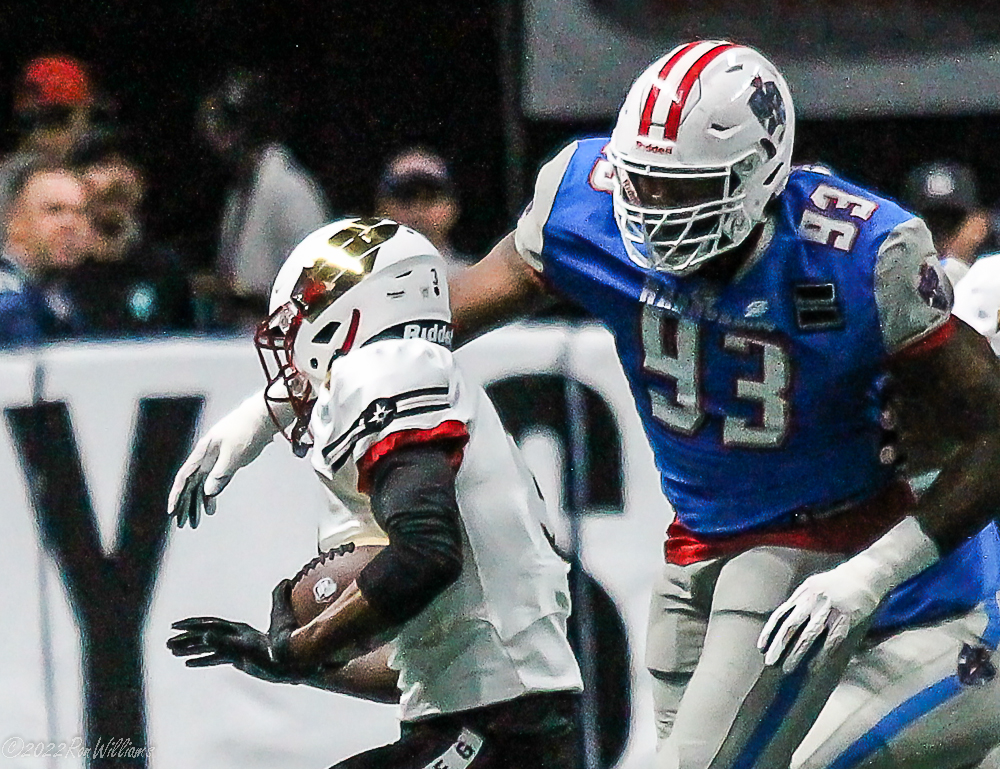 Photo: 93 Ulric Jones is about to bring down Vegas runner Dez Epps

The Northern Arizona defense dropped Vegas ball carriers for losses on a two consecutive plays setting up an errant pass from quarterback Javahn Henderson. Mercado Anderson came up with the play, returning the pick six from 20 yards out to extend the home teams lead to 27-13.

Vegas was able to respond with backup quarterback Kare Lyles, who threw a touchdown pass to Jordan McCray, as McCray had to  make a great adjustment to pull the ball in, trimming the lead to 27-20 with 10:54 to play.

It was a real defensive battle in the final minutes, as both teams made big plays to keep it a one score game. Brandon Fischer added a field goal with just 51 seconds left, and Anderson came up with his second pick to put this baby to rest.

Defensive Coordinator Rob Keefe said, “Too proud of our defense tonight. Coach Moss and the rest of the coaches have put together a good team. We believe in our offense, but if we ever need to step up defensively, we are ready for the challenge. Defense wins championships.”

The Wranglers are now (3-1) and will take their three game winning streak on the road, as they face the Sugar Skulls in Tucson, next Saturday at 6:05 pm. The game can be seen on YouTube.