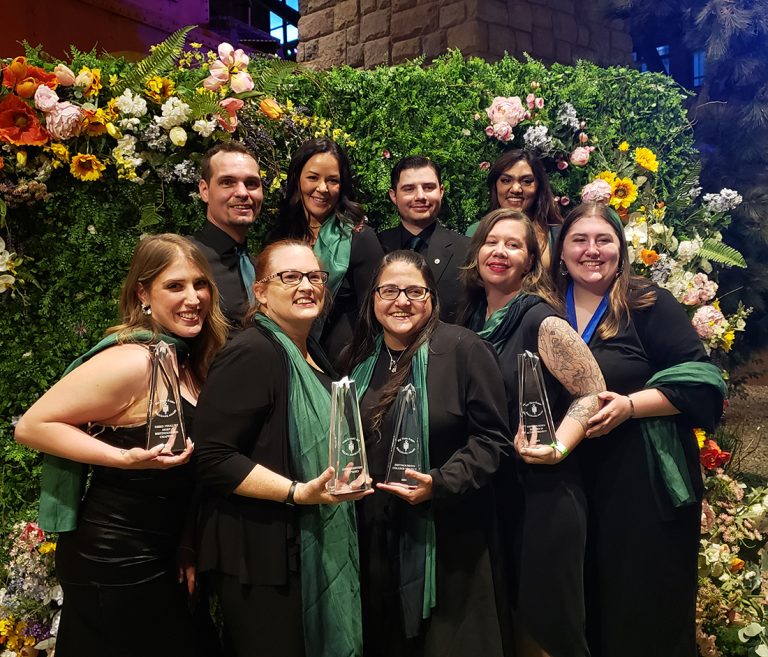 Photo: Yavapai College Phi Theta Kappa members celebrate with the cache of awards they won at the international honor society’s annual conference in Denver in earlier this month. Combined with multiple awards earned at the PTK regional conference in March, the 2021-2022 YC PTK chapter became the most awarded in its 25-year history.

Woolsey, the lead advisor for the 25-year-old chapter, has requested the college purchase a trophy case for the cache of awards the chapter earned this academic year at both the regional and national levels.

Perhaps most rewarding of the cache – a fourth-place ranking out of 1,290 chapters for Most Distinguished Chapter announced during the PTK annual conference earlier this month in Denver.

“I expected we would do well, but we knocked it out of the park,” Woolsey said of the YC chapter’s ranking, which is based on the scores earned for projects YC PTK members created, researched, and reported to regional and international PTK officials. “It was really cool to see this little, tiny chapter from Arizona compete well with the big schools,” she said.

The YC PTK chapter also picked up a Distinguished College Project award at the international conference, winning for a collaboration with YC President Dr. Lisa Rhine aimed at making available mental health resources easier to discover and access via the college website. “The goal of the college projects is to produce something that really helps students on our campuses. This will definitely help them. It’s so needed,” Woolsey said.

YC PTK members also earned a Distinguished Honors In Action project award at the international conference. The chapter’s HIA project team researched the positive effects of reading to children at a very young age. An actionable result of the project – literacy partnerships with area schools – is in development and expected to roll out next fall.

All of the regional and international awards combined to make the 2021-2022 YC PTK chapter the most rewarded ever. Woolsey believes she knows why.

Woolsey credited Bryant and her fellow PTK Officers, incoming President Heidi Howden, Vice President Michael Swyers and Secretary Olivia Tiwari, for their steady leadership and their individual contributions to the award-winning chapter projects. “The officers really stepped up while so many people participated at different levels,” she said, citing YC PTK members across Yavapai County, students and teaches outside of PTK, and co-chapter advisors Sarah Southwick and Kathy Peterson.

Woolsey, who also directs YC’s Honors Program, thanked PTK members for a “fabulous” year. “I feel like I have the best job in the world. I get to work with very engaged future leaders and scholars,” she said.