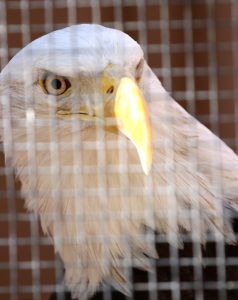 A new study from the journal Science found that almost half of bald eagles and golden eagles in Arizona and 37 other states suffered from chronic lead poisoning.

The main way eagles consume lead is through their diet. Lead bullets and shot used in hunting game and varmints break apart on impact, and the carcasses are scavenged by birds of prey, who then ingest the lead.

Experts say solutions are simple: use nonlead ammunition or remove gut piles and carcasses from the field. The Arizona Game & Fish Department has a program that in certain cases allows hunters to swap their lead ammo for free.

“We’ve had 80 to 90% over the last decade of hunters in the area either switching to nonlead alternatives or removing their gut piles out of the environment,” said Kenneth “Tuk” Jacobson, the department’s raptor management coordinator.

Vince Sable, a wildlife research biologist and one of the authors of the Science study, said the poisoning is suppressing bald eagle populations by 4%, slowing the 10% growth seen over the past several years. Lead poisoning also can impair eagles’ ability to fly.

The condor population has suffered from the same lead poisoning, which nearly drove them to extinction, according to National Geographic.

“A lot of it is open areas where (scavengers) are feeding on carrion and carcasses that are left out,” said Jan Miller, animal care coordinator at Liberty Wildlife, an animal rehabilitation and refuge center in south Phoenix. “Oftentimes, people will go out and varmint hunt, and they’ll do things like shoot rabbits or shoot coyotes and then leave it there with the intention of … animals can feed on it.

“The unfortunate thing is they don’t understand that the lead is going to poison the animals that are now going to eat that carcass.”