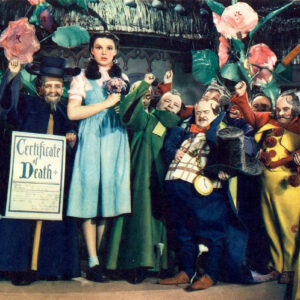 Let me tell you about a man whose face you know, but whose name you’ve probably never heard. We can all learn an important lesson from Meinhardt Raabe, someone who truly made the most of his one big moment in life.

For nearly 83 years now “The Wizard of Oz” has delighted viewers both young and old alike. CBS ran the movie every spring at Eastertime. Millions of Baby Boomers grew up eagerly watching it year after year.

Many kids didn’t enjoy the singing — it got in the way of the action. Except for “Ding Dong the Witch Is Dead.” What a song! For a glorious four minutes and 15 seconds, the Munchkins let loose and gleefully romp around a freshly deceased corpse. Think how eerily ironic that is — celebrating the very thing we fear above all others: Death.

Oh, it’s deliciously morbid, happily chortling, “She’s gone where the goblins go below, below, below” (which was as close to saying ‘Hell’ as MGM dared go in 1939).

And amid all the euphoric warbling and dancing, one character stands out from all others. Meinhardt Raabe steps forward, unrolls a scroll, and proclaims with bureaucratic efficiency: “As coroner, I must aver, I thoroughly examined her. And she’s not only merely dead; she’s really, most sincerely dead!”

Yes, Meinhardt Raabe was that guy, the Munchkin coroner in the dark suit who steals the show in the Ding Dong sequence. Those 20 words, lasting just 10 seconds, made up Meinhardt’s entire Hollywood career. He never appeared in another movie. (Though in fairness to Hollywood, how many roles were there for an actor who stood 3-foot-3 tall?)

But here’s the thing: Meinhardt Raabe seized his 10-second window of opportunity and milked it for all it was worth.

Life didn’t start on a fair note for Meinhardt. As the only “little person” in his hometown of Watertown, Wis., he thought no one else was like him. In fact, he didn’t see another height-challenged person until age 17, when he visited the Midget Village at the 1933 Chicago World’s Fair.

But he was no dummy. He earned a bachelor’s degree, and later a master’s, in accounting. Rejected for job after job because of his stature (and what the heck does height have to with accounting, anyway?), he finally found work in 1936 playing “Little Oscar” and driving around in Oscar Mayer’s very first Weinermobile.

Meinhardt took a break from his hotdog gig to play the Munchkin coroner. Those 10 seconds were his chance to step into motion picture immortality. Then it was back to the Weinermobile, followed by World War II service as a Civil Air Patrol pilot and finally work in his chosen profession as an accountant.

But as “The Wizard of Oz” passed from movie to cinematic classic to beloved legend, Meinhardt’s popularity rose along with it. He became a featured guest at Oz fan conventions, appeared in multiple Oz documentaries, and was a guest on countless TV talk shows where he told about this brief time on the MGM movie set. He even published his autobiography, “Memories of a Munchkin: An Illustrated Walk Down the Yellow Brick Road.”

When Meinhardt Raabe died April 9, 2010, at the ripe old age of 94, he was the last surviving person who’d had a speaking role in “The Wizard of Oz” and had turned the experience into something of a second career.

All that from just 10 seconds on camera.

The moral of the story? Think big, even when the opportunity looks small. Something as minuscule as a 10-second role could turn out to be the chance of a lifetime. Think how different Meinhardt’s life would have been if he had said, “Naw. It’s just 20 words of dialogue. I’d be on and off the screen in a heartbeat. It’s not worth messing with.”

You never know when your 10-second window of opportunity will present itself. Be like Meinhardt and grab the brass ring before it passes by. You may not get a second chance.