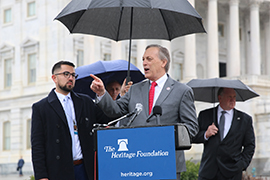 Photo: Rep. Andy Biggs, R-Gilbert, called the Biden administration’s plan to end Title 42, a pandemic-era rule that has been used to turn away 1.7 million migrants for health reasons, a “reckless decision.”

For immigration advocates, the end to Title 42 couldn’t come soon enough, but critics warned this week that it’s coming too soon and will “open the floodgates” to migrants at the southern border.

“When Title 42 goes away, not only is it going to make our job somehow even more impossible to do, it creates this potential for all these people to now request asylum, regardless of the legitimacy of their claims,” said Jon Anfinsen, president of National Border Patrol Council’s Del Rio sector.

“Which is going to bog down an already broken system,” Anfinsen said during a conference call Monday organized by House Republicans with other Border Patrol union leaders.

But advocates disagree, with one saying Tuesday that Title 42 should never have been used to turn away migrants at the border in the first place, and that its end is “long overdue.”

“Title 42 is not an immigration policy,” said Vanessa Cárdenas, deputy director for America’s Voice, which advocates for migrants. “It is a public health policy that was used by the Trump administration to deter immigrants from coming into the country.”

The policy was implemented in March 2020 as a public health measure to prevent the spread of COVID-19, and has since been invoked to more than 1.7 million migrants. But the Centers for Disease Control and Prevention, which initially called for the rule, said last week that it is no longer needed to protect the public health.

The Biden administration, which has been under pressure from immigration groups to end the practice, subsequently announced that it would lift Title 42 on May 23, a delay requested by the CDC to let it ramp up a mandatory vaccination program for migrants.

But the move comes as the border is seeing record numbers of migrants, according to Customs and Border Protection data. Of the 838,685 migrants encountered at the southern border from October through February, just over 52% have been expelled under Title 42, or 437,763 so far in fiscal 2022.

Opponents of the administration’s move said those numbers are likely to increase once Title 42 is lifted. The Department of Homeland Security does not have the policies, personnel or facilities to handle the now, much less an increase, say critics like Rep. Andy Biggs, R-Gilbert, who called ending Title 42 a “reckless decision.”

“I’m calling upon (Homeland Security) Secretary Alejandro Mayorkas to call and make this statement to his boss, Joe Biden, that you cannot stop Title 42,” Biggs said Tuesday at a Capitol news conference, backed by former directors of CBP and Immigration and Customs Enforcement.

“The statutory claim is communicable disease,” Biggs said of the rationale behind Title 42. “That doesn’t just mean COVID, that means other diseases that come across and you can’t let CDC give this away.”

Union officials told lawmakers that Border Patrol agents could be encountering up to 12,000 migrants a day by the end of May and as many as 18,000 a day in later months.

But the administration insists it is taking steps that will allow it to handle the thousands of asylum-seeking migrants who are showing up now, as well as any increases.

Among the steps unveiled last week by DHS are plans to shift officers to border hot spots as needed, to expand a COVID-19 vaccination program for migrants that began last week and to cut the time it takes to process an asylum claim from years to months.

The plan includes $375 million to hire officials to expedite claims processing, and more than $1 billion to build “soft-sided facilities” to detain migrants as well as transport and treat them.

Still, Anfinsen told GOP lawmakers he is not confident that DHS can deliver on its promises.

Anfinsen said many Border Patrol agents are already working mandatory overtime, do not have the resources they need and get tied up with administrative tasks that keep them from patrolling the border.

While agents say Title 42 has helped, immigration advocates say it has done so at the expense of migrants who are often exposed to disease, violence and extortion when they are turned away at the border.

“It is really hard for us to have any sympathy for the Border Patrol, knowing that they’ve constructed these policies that have led to the deaths of thousands of people,” said Jason De León, the executive director of the Colibrí Center for Human Rights.

Even with the end of Title 42, migrants will still be processed by border officials under Title 8. The policy places migrants seeking asylum into removal proceedings until they can establish a legal basis to remain in the U.S., such as proof that their lives would be in danger if they were returned to their home countries.

Advocates like Cárdenas said they are confident that public and private organizations will be able to handle any influx of migrants after Title 42 ends.

“The reality is that we can manage our border … right now we might have an uptick in the border, that is not unusual,” Cárdenas said. “So while I understand their concern, I think that we have the strategies that can be implemented to be able to do this in an efficient manner.”