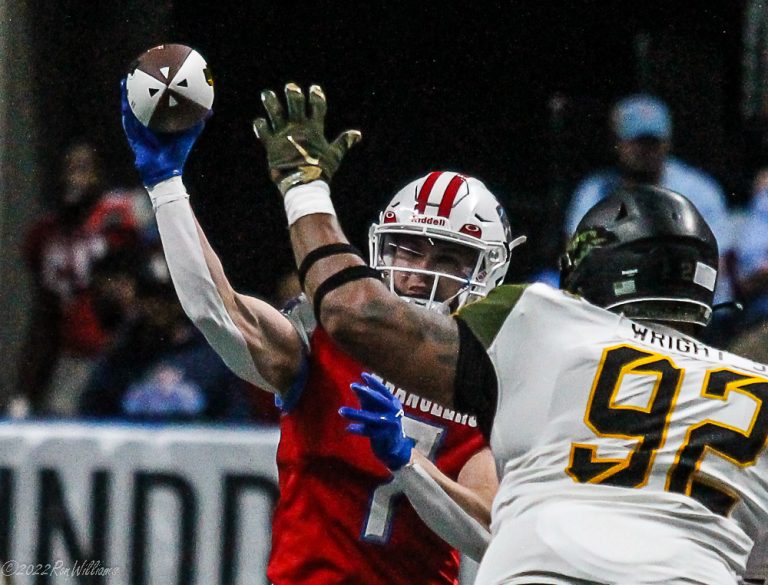 Photo: 7 Kaleb Barker attempts a pass while being pressured by Manny Wright of San Diego

The Northern Arizona Wranglers made it two in a row with a 45-28 win over the San Diego Strike Force, Saturday night at the Findlay Toyota Center in Prescott Valley. A good crowd was on hand to enjoy another solid performance by the home team.

Northern Arizona scored on their opening drive at the 10:38 mark, when Kaleb Barker threw a strike into the back of the end zone to Quentin Randolph. Brandon Fischer added the extra point for 7-0 lead. The Wranglers picked up a point on the ensuing kickoff when Ishmail Adams had the ball go right between his legs and into the end zone. Adams was unable to get the ball out of the end zone thanks to Marquis Bridges, Quentin Randolph, and DuShon David, who combined to bring him down right there.

San Diego got on the score board when Tanner Kuljian kicked a 30 yard field goal with 4:22 left in the opening quarter to cut the Wranglers lead to 8-3.

The Wranglers would extend their lead early in the second quarter. Glen Gibbons Jr. scored from one yard out. The defense would continue to establish themselves throughout the quarter, giving the offense more and more opportunities. Defensive Lineman Ulric Jones said, “We had a few busted coverages and a few busted assignments up front, but man it feels good to be 2-1, something that has never been done here, so we’re just looking to build off it.” In regards about his interaction with the fans, “I am an emotional player. I play off excitement and I play off passion. I have to play that to get going. I love the fans, and I love playing here for Northern Arizona.”

Brandon Fischer added a 42 yard field goal and Barker scored again on a ten yard run with :52 left in the first half. It took a long time to play the final seconds as the Wrangler defense made it almost impossible for the Strike Force to score. I said almost. San Diego managed to get into the end zone with :02 left, missing the PAT badly. The Wranglers went into halftime with a 25-9 lead.

San Diego cut the Wrangler’s lead to 25-16 with 5:28 remaining in the third quarter. Davonte Sapp-Lynch bolted down the sideline for 27 yards. The Wranglers responded when Barker called his own number from one yard out to lead 32-16 after three quarters. 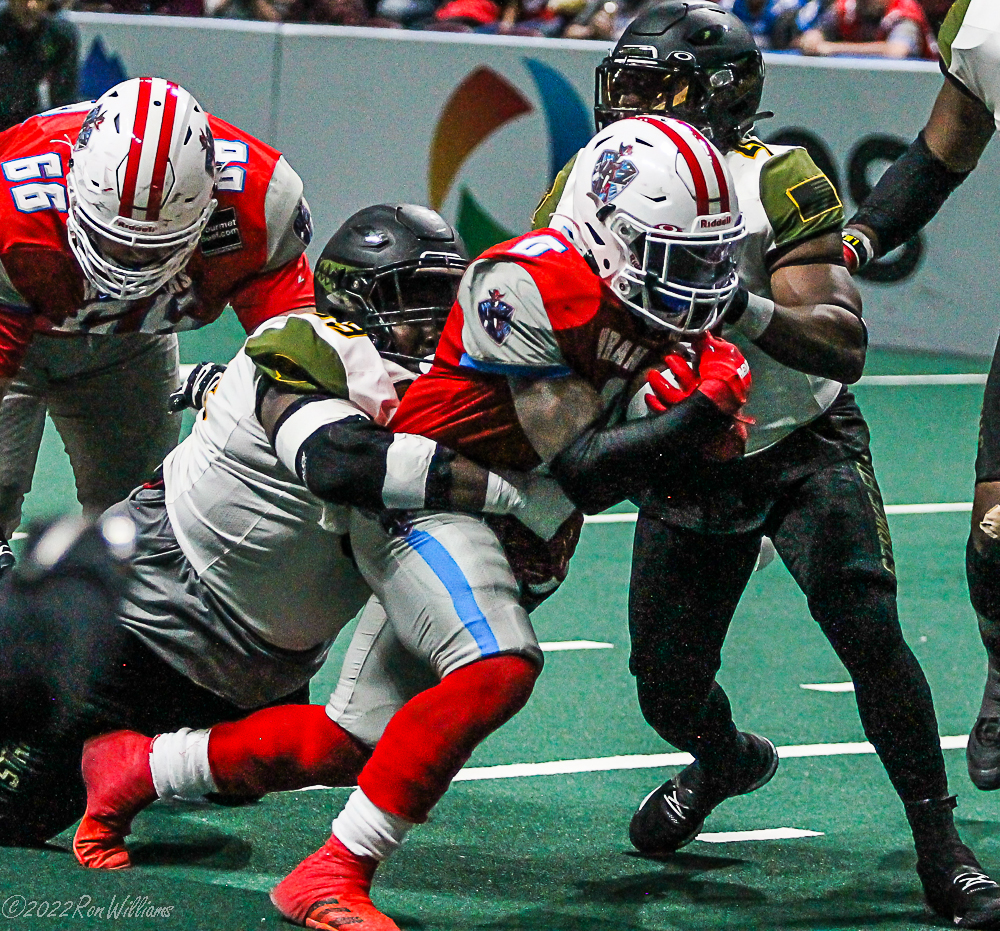 Photo: Boom Williams drives to the goal line while dragging Javian Williams along the way

Boom Williams would score the final two Wrangler touchdowns. The first came on an 8 yard run to extend the lead to 39-16 with 9:34 left. After Strike Force scored on an 11 yard pass play from Steve Cluley to Rashad Ross. Then Williams scored on a 5 yard run to give NAZ a 45-22 lead with 4:57 remaining.

The Strike Force added a Cluley one yard rush, with just :38 left for the final score of the game.

Lineman Michael Bailey said, “Always a good game when you win. Got to get better each week and keep going up and up.” In regards to looking ahead to meeting Vegas a second time, Bailey added “Every opponent is different every time, even when we play them a second time, most likely will be a different game than the one before.”

Kicker Brandon Fischer, whose kick contributed to the first quarter safety, said, “I feel comfortable out there kicking. Practicing has gotten me to that point. I just try to add pressure to the returners and sometimes it works. It’s great playing in front of the home crowd. I know a lot of people here so that makes it a lot of fun.”

Kalbe Barker led NAZ with 58 yards rushing and two touchdowns. He completed 8-16 for 84 yards and one TD. Boom Williams had two rushing touchdowns on 25 yards rushing. Receiver Quentin Randolph had 5 receptions for 61 yards and a touchdown. Defensively, Trae Meadows, Mercado Anderson, and Vada King led the team with six tackles each. King also had the only sack. Steve Cluley threw for 119 yards and two touchdowns to lead the Strike Force.

Wranglers head coach Les Moss said, “We let them hang around tonight. They are getting better as a team. I don’t think we handled the end of the first half the way we should have in situation football. We scored to quick we should have been the last team to score. We didn’t play as well as we did last week. We learned a lot of lessons tonight though, and we will regroup after this bye week and get better. We just got into situations we have not seen yet, and need to make our corrections.”

The Wranglers will host the Vegas Knight Hawks on Saturday, April 16 at 6:05 pm, in a rematch of the season opener, won by Vegas 22-9. Tickets are available at the Findlay Toyota box office or at www.nazwranglers.com

PrevPreviousThinking About Your Mental Health? Here’s Why You Should Try Golf
NextNonprofits in Northern Arizona Preparing for Arizona Gives Day 2022 24-Hour Fundraising Event, APRIL 5-6Next