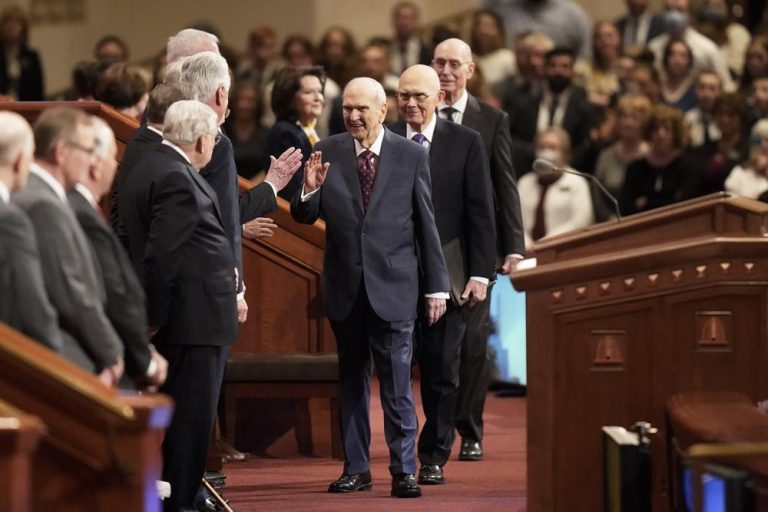 Top leaders of the Church of Jesus Christ of Latter-day Saints addressed COVID-19, the church’s support of non-discrimination laws, war in Ukraine and legacies of racism at the faith’s first in-person conference since the onset of the pandemic.

The nearly 17 million-member faith, which is widely known as the Mormon church, hosted about 10,000 people Saturday at its 21,000-seat conference center in Utah. Though its signature conference regularly reached full capacity pre-pandemic, for two years, it’s been held mostly remotely, with the majority of viewers watching livestreams from afar.

President Russell Nelson, the Latter-day Saints’ 97-year-old prophet, told listeners gathered at the church’s Utah headquarters and tuning in remotely that the troubles afflicting the world reaffirmed the need for faith and devotion.

“Contention violates everything the Savior stood for and taught,” he said.

He and other leaders mostly eschewed political issues, focused their remarks on spiritual matters and stressed unity and faith amid worldwide struggles. However, when high-ranking officials addressed current events and politics, they centered their remarks on denouncing polarization. They urged members of the faith to put their energy toward solution-oriented work rather than heated debates or criticism focused on the past.

Church leader Neil Andersen implored members of the faith to focus on healing divisions, rather than dwelling on historical injustices or other divisive matters. Andersen encouraged tolerance and acceptance, highlighting the church’s support for non-discrimination legislation in Arizona designed to protect LGBTQ individuals.

“We genuinely love and care for all our neighbors, whether or not they believe as we do,” Andersen, a member of a top governing church panel called the Quorum of Twelve Apostles, said.

The church has backed anti-discrimination laws in Arizona and Utah and over the past decade softened its stances toward LGBTQ members of the faith and their families, however it remains opposed to same-sex marriage on theological grounds.

Unlike prior conferences, most church leaders did not explicitly address the nationwide reckoning over racial injustice. Andersen encouraged listeners to summon “the inner strength to cool, calm, and quench the fiery darts aimed toward the truths we love.”

As an example of such a dart, he referenced a Salt Lake Tribune opinion piece that connected contemporary racism in Utah to historical examples of prejudice, including the church’s ban on black members serving in the priesthood that was lifted nearly half a century ago.

Andersen urged listeners to avoid “shrinking before those who disparage us” and share the faith in ways “void of anger or malice.”

Church officials announced a series of leadership changes on Saturday, including the addition of Tracy Browning to a mid-level position. When she takes her post in August, she’ll become the first black woman to serve on an all-women leadership panel focused on families and children. Women cannot serve in the priesthood or top leadership positions in the Church of Jesus Christ of Latter-day Saints.

The forward-looking perspective echoes prior remarks from church leaders, who have disavowed racism and expressed regret for past church positions, while stopping short of formally apologizing and avoiding opening up debate about church doctrines being reversed.

Jeffrey Holland, another member of the Quorum of Twelve Apostles, geared remarks toward young people struggling amid the pandemic, shedding light on the risk of suicide and urging kids to seek help and counsel. His remarks come after the number of emergency department visits for suspected suicide attempts spiked during the first year of the pandemic and parallel concerns raised last month by Utah Gov. Spencer Cox, a Latter-day Saint himself, about transgender youth and suicide.

“Watch for signs of depression, despair, or anything hinting of self-harm. Offer your help. Listen. Make some kind of intervention as appropriate,” he asked conference-goers.

Though high-ranking officials generally focus on spirituality at the church’s signature twice-yearly conference, they’ve in the past announced major shifts including the lifting of a ban on baptisms for children of same-sex couples.

While disagreement exists among members of the faith, throughout the pandemic, Nelson and other high-ranking church officials have repeatedly encouraged vaccinations and adherence to public health guidelines like masks. For a period of time, they closed temples, suspended in-person services and sent missionaries back home.

High-ranking officials on Saturday commended missionaries for adapting to the challenges presented by COVID-19, which for many included pivoting to remote service, and acknowledged it had not been easy. They encouraged young men and women eligible to serve missions, but who may not have done so yet because of the pandemic, to prepare.

“I know it has not been easy,” said M. Russell Ballard, the acting president of the Quorum of the Twelve Apostles.

PrevPreviousRamadan kicks off in much of Middle East amid soaring prices
NextOpinion: Turning a Corner, Away from Excessive Risk Aversion – Michael BaroneNext