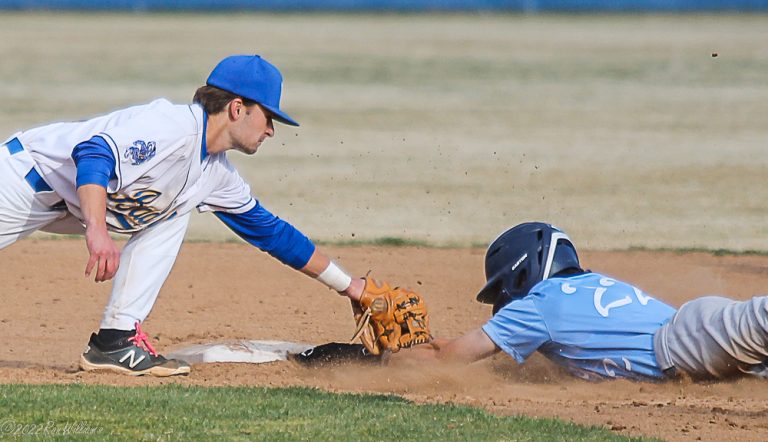 Photo: Josh Miller applies the tag on Carson Brown, who was called safe on the play

The Deer Valley Skyhawks scored nine runs in the fifth and six innings to beat the Prescott Badgers 11-5 at Prescott High School yesterday.

The Skyhawks  took a 1-0 lead on Badgers starter Lukas Barrett. The lead was short lived as Ethan  Ammerman gave the Badgers the lead in the bottom of the first. The one out single, scored Luke Carmick and Brendan Costes, both of whom also singled.

The Skyhawks would tie the score in the second, but the Badgers would regain the lead 3-2 in the fourth. Ammerman doubled and scored on a Tyson Potts single.

Barrett started, but was replaced by Adrian Sanderford in the fifth as Deer Valley had six base runners cross home plate. Hits by Rudy Gonzales, Josh Palm, Casey Parks, and Mike McDougall led the attack and an 8-3 lead.

Josh Miller and Sam Strasser scored in the fifth on singles by Carmick and Costes, to trim the deficit to 8-5.

The Skyhawks (7-6), loaded the bases in the sixth, so Ryan Orvis was brought in to relieve Sanderford. McDougall did some more damage coming up with a bases clearing double to open the lead up to 11-5.

Prescott would strand two runners in the sixth, and one more in the seventh, as Deer Valley closed out the game with the six run win. Coach Barry Tolli said, “I thought Lukas Barrett did a good job competing for us to keep us in the game. We had a let down inning defensively, dropping popups and giving away outs. We have to  shorten innings.”

The Badgers (6-6) will hit the road today as they travel to Bullhead City to face the Mohave Thunderbirds. Two games are on tap, as the teams will make up the rained out game on Tuesday first.

The Prescott Badgers slipped past the Deer Valley Skyhawks 7-6, in Glendale. RJ Parra went the distance in the circle, with 13 strikeouts to pick up the win.

The game was close throughout, but the Badgers broke a 3-3 tie, with three runs in the fifth to go ahead 6-3. Prescott added what turned out to be the winning run in the sixth to go up 7-4. The Skyhawks would close the gap with two in the bottom of the inning to get within 7-6. Neither team was able to score in their final at bat.