AP sources: Asylum limits at border expected to end May 23 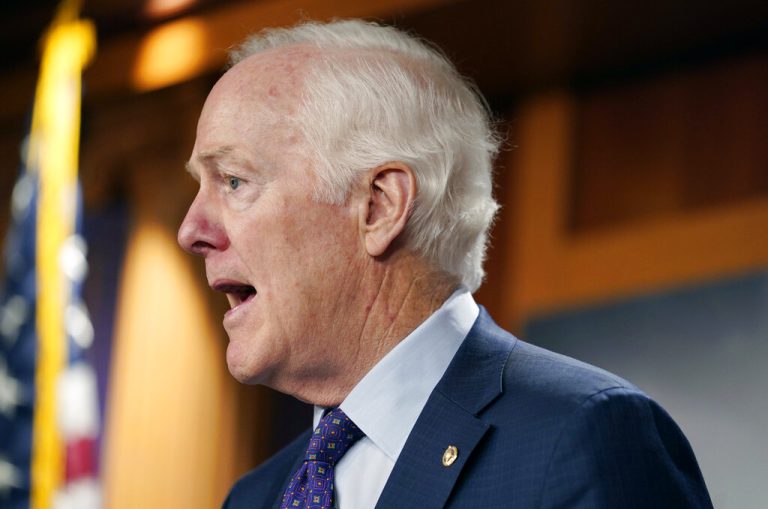 The Biden administration is expected to end the asylum limits at the U.S.-Mexico border by May 23 that were put in place to prevent the spread of COVID-19, according to people familiar with the matter.

The decision, not yet final, would halt use of public health powers to absolve the United States of obligations under American law and international treaty to provide haven to people fleeing persecution, and would apply to all asylum-seekers.

Ending the limitations in May would allow for time to prepare at the border, the people said. But the delay runs against the wishes of top Democrats and others who say COVID-19 has long been used as an excuse for the U.S. to get out of asylum obligations.

It also raises the possibility that more asylum-seeking migrants will come to the border at a time when flows are already high. The Department of Homeland Security said Tuesday that about 7,100 migrants were coming daily, compared with an average of about 5,900 a day in February and on pace to match or exceed highs from last year, 2019 and other peak periods.

President Joe Biden declined to discuss his administration’s plans, telling reporters Wednesday at the White House, “We’ll have a decision on that soon.”

Whenever the limits are lifted, his communications director said “there will be an influx of people to the border. We are doing a lot of work to plan for that contingency.” Speaking broadly, Kate Bedingfield said the administration is trying to “build up our migration system and ensure that we are restoring order at the border.”

The Centers for Disease Control and Prevention had extended its asylum-blocking powers for two months in late January, near the height of the omicron variant. The authority is up for renewal this week, and officials were expected to announce as early as Friday that it would be terminated, giving border authorities a few months to prepare for the coming deadline.

The people familiar with the plans saw a draft report that has not been finalized and they spoke to The Associated Press on condition of anonymity to discuss the plans.

The limits went into place in March 2020 under the Trump administration as coronavirus cases soared. While officials said at the time that it was a way to keep COVID-19 out of the United States, there always has been criticism that the restrictions were used as an excuse to seal the border to migrants unwanted by then-President Donald Trump.

It was perhaps the broadest of Trump’s actions to restrict crossings and crack down on migrants. The health order has caused migrants to be expelled from the United States more than 1.7 million times since March 2020 without a chance for them to request asylum.

And restrictions took effect over the objections of CDC officials, and Dr. Martin Cetron of the Division of Migration and Quarantine refused the order to begin its use. He said there was no public health basis for such a drastic move, the AP reported. But then-Vice President Mike Pence ordered the CDC’s director to use the agency’s emergency powers and it went into effect.

As mask mandates were lifted, vaccination rates climbed and COVID-19 rates dropped among migrants crossing from Mexico it became increasingly difficult to defend the order on scientific grounds.

Biden, who has rolled back some of Trump’s other more restrictive policies, has taken increasing criticism for keeping the policy.

Not all Democratic elected officials agreed, including some from border and swing states. Sens. Mark Kelly and Kyrsten Sinema, both Arizona Democrats, sided with Republican leaders to say Title 42 should remain until U.S. border authorities were prepared for sharp increases in new arrivals.

“The Border Patrol agents told me they expect a tsunami of humans to come across the border and the Border Patrol has said they will lose control entirely,” said Sen. John Cornyn, R-Texas.

Homeland Security officials said they are planning for as many as 18,000 arrivals daily, an astounding number that they cautioned was simply to prepare for all possible outcomes, not projections.

But there have been no major changes to how migrants are processed at the U.S.-Mexico border and no increase in holding facilities for them. The immigration court backlog continues to soar to more than 1.7 million cases.

Critics say Title 42 has been an excuse to avoid asylum obligations under U.S. law and international treaty, buying Biden time to create the “humane” asylum system that he promised during his 2020 campaign.

“Title 42 is a horrific and unjustified policy that should never have been enacted and has caused grave harm to thousands of asylum-seekers over the past two years,” said immigration attorney Lee Gelernt of the American Civil Liberties Union.

While there is no aggregate rate for migrants, COVID-19 test results from several major corridors for illegal border crossings suggest it is well below levels that have triggered concerns among U.S. officials.

McAllen, Texas, the largest city in the busiest corridor for illegal crossings, has a higher rate among migrants — 11.3% for the week ending March 16 — but it has been consistently lower than the general population.

CDC Director Dr. Rochelle Walensky noted falling rates when she ended asylum limits on unaccompanied child migrants on March 11, while keeping them for adults and families with kids. In August, U.S. border authorities began testing children traveling alone in their busiest areas: Positives fell to 6% in the first week of March from a high of nearly 20% in early February.

Asylum limits have been applied unevenly by nationality, depending largely on costs and diplomatic relations with home countries. Many migrants have been spared from Cuba, Venezuela, Nicaragua and, more recently, Ukraine. Homeland Security officials wrote border authorities this month that Ukrainians may be exempt, saying Russia’s invasion “created a humanitarian crisis.”