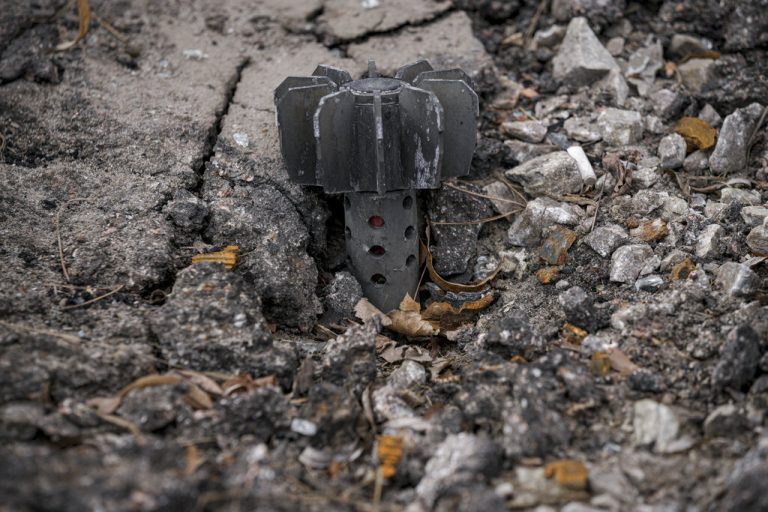 Photo: A part of a mortar shell sticks out of the asphalt

Ukrainian President Volodymyr Zelenskyy accused the West of cowardice Sunday while another top official said Russia was trying to split the nation in two, like North and South Korea.

Zelenskyy made an exasperated plea for fighter jets and tanks to help defend his country from Russia’s invading troops. Russia now says its main focus is on taking control of the eastern Donbas region, an apparent pullback from its earlier, more expansive goals, but one which is raising fears of a divided Ukraine.

Speaking after U.S. President Joe Biden said in a lacerating speech that Russian President Vladimir Putin could not stay in power — words the White House immediately sought to downplay — Zelenskyy lashed out at the West’s “ping-pong about who and how should hand over jets” and other weapons while Russian missile attacks kill and trap civilians.

“I’ve talked to the defenders of Mariupol today. I’m in constant contact with them. Their determination, heroism and firmness are astonishing,” Zelenskyy said in a video address, referring to the besieged southern city that has suffered some of the war’s greatest deprivations and horrors. “If only those who have been thinking for 31 days on how to hand over dozens of jets and tanks had 1% of their courage.”

He told the reporters that the issue of neutrality – and agreeing to stay out of NATO – should be put to Ukrainian voters in a referendum after Russian troops withdraw. He said a vote could take place within a few months of the troops leaving.

Russia quickly banned the interview from being published. Roskomnadzor, which regulates communications for Moscow, issued the ban, saying there could be action taken against the Russian media outlets that took part, which included “those that are foreign media outlets acting as foreign agents.”

Russia-based outlets appeared to comply with the ban although the interview was published abroad.

Zelenskyy responded by saying Moscow was afraid of a relatively short conversation with journalists. “It would be funny if it weren’t so tragic,” he said, according to the Ukrainian news agency RBK Ukraina.

At the Academy Awards ceremony in Los Angeles, attendees expressed support for Ukraine by falling silent for 30 seconds. Some arrived wearing blue-and-gold ribbons, the colors of the Ukrainian flag. Actor Sean Penn had campaigned for Zelenskyy — a former actor — to speak at the ceremony.

Russia’s invasion of Ukraine has stalled in many areas. Its aim to quickly encircle the capital, Kyiv, and force its surrender has faltered against staunch Ukrainian resistance — bolstered by weapons from the U.S. and other Western allies.

Moscow claims its focus is on wresting the entire eastern Donbas region, which has been partially controlled by Russia-backed separatists since 2014. A high-ranking Russian military official on Friday said that troops were being redirected to the east from other parts of the country.

Russia has supported the separatist rebels in Luhansk and neighboring Donetsk since the insurgency erupted there shortly after Moscow annexed the Crimean Peninsula from Ukraine. In talks with Ukraine, Moscow has demanded Kyiv acknowledge the independence of Donetsk and Luhansk.

Kyrylo Budanov, the head of Ukrainian military intelligence, accused Russia of seeking to split Ukraine in two, making the comparison to North and South Korea.

“The occupiers will try to pull the occupied territories into a single quasi-state structure and pit it against independent Ukraine,” Budanov said in a statement released by the Defense Ministry. He predicted that guerrilla warfare by Ukrainians would derail such plans.

A Ukrainian delegate in talks with Russia on ending the war, Davyd Arakhamia, said in a Facebook post the countries would meet in Turkey beginning Monday. However, the Russians then announced the talks would start Tuesday. The sides have met previously with no deal reached.

Ukraine’s priorities at the talks will be “sovereignty and territorial integrity,” Zelenskyy told his nation in his nightly address.

“We are looking for peace, really, without delay,” he said. “There is an opportunity and a need for a face-to-face meeting in Turkey.”

Zelenskyy also signed a law that bans reporting on troop and equipment movements that haven’t been announced or approved by the military. Journalists who violate the law could face three to eight years in prison. The law does not differentiate between Ukrainian and foreign reporters.

Ukraine says that to defeat Russia, the West must provide fighter jets and not just missiles and other military equipment. A proposal to transfer Polish planes to Ukraine via the United States was scrapped amid NATO concerns about being drawn into direct fighting.

In his pointed remarks, Zelenskyy accused Western governments of being “afraid to prevent this tragedy. Afraid to simply make a decision.”

His plea was echoed by a priest in the western city of Lviv, which was struck by rockets a day earlier. The aerial assault illustrated that Moscow, despite assertions that it intends to shift the war eastward, is willing to strike anywhere in Ukraine.

“When diplomacy doesn’t work, we need military support,” said the Rev. Yuri Vaskiv, who said fearful parishioners were staying away from his Greek Catholic church.

On the road to Kyiv, residents of a village combed through the wreckage of Russia’s ongoing attacks. Locals in Byshiv, about 22 miles (35 kilometers) from Kyiv. walked through buildings torn open and destroyed by shelling to salvage what they could, including books, shelving and framed pictures.

Standing in what used to be a kindergarten classroom, teacher Svetlana Grybovska said too many children have fallen victim.

“It’s not right” Grybovska told British broadcaster Sky News. “Children are not guilty of anything.”

Russia confirmed it used air-launched cruise missiles to hit a fuel depot and a defense plant in Lyiv, near the Polish border. Another strike with sea-launched missiles destroyed a depot in Plesetske just west of Kyiv, where Ukraine stored air defense missiles, said Maj. Gen. Igor Konashenkov, a spokesman for the Russian Defense Ministry.

Russia’s back-to-back airstrikes shook the city that has become a haven for an estimated 200,000 people who have fled bombarded towns and cities. Lviv, which has largely been spared bombardment, also has been a waystation for most of the 3.8 million refugees who have left Ukraine since Russia invaded on Feb. 24.

In a dim, crowded bomb shelter under an apartment block near the first blast site, Olana Ukrainets, a 34-year-old information technology professional, said she couldn’t believe she had to hide again after fleeing from the northeastern city of Kharkiv, one of the most bombarded cities.

“We were on one side of the street and saw it on the other side,” she said. “We saw fire. I said to my friend, ‘What’s this?’ Then we heard the sound of an explosion and glass breaking.”

In Kharkiv, Ukrainian firefighters used axes and chainsaws to dig through concrete and other debris Sunday searching for victims of a Russian military strike on the regional administration building. One body was found Saturday, a firefighter said. At least six people died in the March 1 attack — the first time Russian forces hit the center of Kharkiv, once home to 1.5 million people.

On Sunday night, a rocket attack hit an oil base in the far northwestern region of Volyn.

Along with the millions of people who have fled Ukraine, the invasion has driven more than 10 million people from their homes, almost one-quarter of Ukraine’s population. Thousands of civilians are believed to have been killed.

Andrea Rosa in Kharkiv, Nebi Qena in Kyiv, Cara Anna in Lviv and Associated Press journalists around the world contributed to this report.