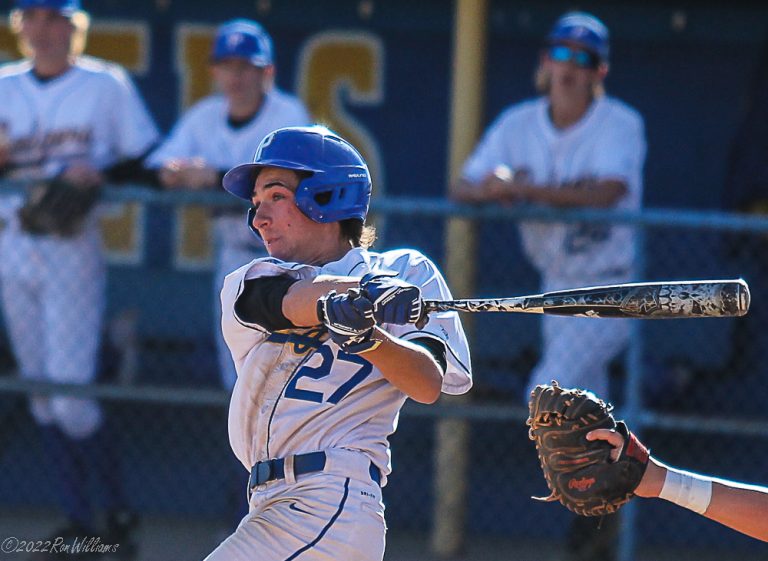 Photo: 27 Luke Carmick follows through on his bases clearing double

The Badgers overcame a 4-1 deficit to beat the Coconino Panthers 10-5 in a very entertaining game at Prescott high School yesterday. The win improves Prescott to (3-1) in the Grand Canyon Region, and (6-4-1) overall,  and gives the Panthers their first loss (3-1), (8-3) overall.

Tyson Potts hurled six innings overcoming miscues that allowed four unearned runs, while allowing just three hits. The only earned run by the Panthers came off Peyton Little with back to back triples by Cole Gillespie and Quinn Mickelson, who picked up the RBI.

The Badgers capitalized in their first at bat with an unearned run when Luke Carmick reached on an error, stole second base, going to third on the error on the throw. Tyson Potts hit a ball too short that was bobbled, scoring Carmick to make it 1-0.

Coconino scored three to take the lead in the top of the second with two outs. Jackson Hammond made it to first on the strike out passed ball. Cooper Derr was then hit by the pitch. An infield Badger error loaded the bases. Ryker Patten delivered with a single to right scoring two. Ryker stole second and the ball went into centerfield, scoring the third run.

The Panthers added one more as Adrain Marquez walked, and eventually scored on a wild pitch.  Chasing three going into the bottom of the fourth, and with one out, Prescott put together a four run rally to take the lead. Peyton Little hit a liner off the third baseman’s glove for an infield single. Brendan Costes singled to left, followed by Lukas Barrett getting hit by the pitch to load the bases. After the second out, Josh Miller worked the walk to score a run, but the big blow came when Luke Carmick doubled, clearing the bases in the process for a 5-4 lead.

Carmick said, “We just kept on putting pressure on them and got the hits when they counted. Always have to stay focus in the game and keep working till the end, and that will win you some games.”

The Badgers one-upped their fourth inning, with a five spot in the sixth. Miller walked and was followed by an error on the shortstop, chasing Panther starter Conner Calahan. Caden Talley came an and gave up a walk to Carmick to load the bases. Ethan Ammerman came through with a big three run double to give Prescott an 8-4 lead. Ammerman said, “I just wanted to get up there and get the ball in play. I got a great pitch to hit and I didn’t miss.”  A second error on the Coconino shortstop followed as Tyson Potts hit a sharp ground ball that the fielder elected to try and cut down the lead runner (Ammerman) at third. The throw went past the third baseman scoring Ammerman, and allowed Potts to end up at third. Peyton Little had an RBI double to left to score the tenth run by Potts.

The insurance runs paid off, as Coconino, facing a new pitcher in Little was able to get one across in their final at bat, on a rare back to back triples by Cole Gillespie and Quinn Mickelson. Little got the final out to end the slightly over two hour contest.

Coach Barry Tolli said, “I think Potts did an amazing job, going six for us, and keeping us in the game. He worked through some sideways situations, but was able to get through them. We talk about how every game has a life. We survived the early onslaught, and then got some timely hits, and that is what you need to win games. Ammerman with his big knock was huge, and Luke with his big hit too. We had a few of them.  Those were the clutch hits we needed. Things were still a little dicey, but with those insurance runs we were able to take charge and finish it up.” The two teams will meet again today at Coconino High School. Game time is 4:00 pm.

The Badgers fell in 14 innings to the Coconino Panthers 3-2 in Flagstaff.  The teams will meet again today at 4 pm at Prescott High School.

Eliza Legge pitched thirteen innings for the Badgers allowing just two runs, only one earned, seven hits, striking out 24, with just two walks. RJ Parra came in the fourteenth, giving up the one run on four walks, with one strikeout, to take the loss.

Coconino went ahead with two in the fourth. Destiny Villas hit a solo homerun. Isabel Pozar singled in Kodylynn Watson, who had reached on an error.

The Badgers got the equalizer when they need it in the top of the seventh to send the game into extra innings. Leah Walker blasted a two run homer to tie the game at two. The next six innings were made of zeros as both pitchers worked hard.  Kaitlyn Tso picked up the win, tossing a complete game with 17 strikeouts, two walks, and scattering five hits, when Danica Kern pushed over the game winning RBI on a bases loaded walk, with one out to end the game.

The Badgers remained unbeaten with an exciting 3-2 home opening win over the Cactus Cobras.  Bradley Henige recorded 29 kills for Cactus, and Dom Solan had 17. The Badgers lost by two in game one, but rebounded in game two, returning the favor with a two point win, and also game three. Cactus came back to win game four by ten, to set up the final game.

Prescott beat the visiting Bradshaw Mountain Bears 7-2. The Badgers top three singles players went a perfect 6-0 in each of their two games.

The Badgers picked up a road win over their rival in Prescott Valley. The Badgers (1-0) in Division II, Section II, (4-0) overall will host Barry Goldwater today at 3:30 pm.

Prescott dominated the match for the most part, with the top three singles players shutting out their opponents. Ava Strasser and Ava Andrews did one better, blanking their opposition in doubles as well. Bradshaw Mountain slipped to (0-2) and (1-5). The Bears will be at Notre Dame Prep in Scottsdale today at 3:30 pm.