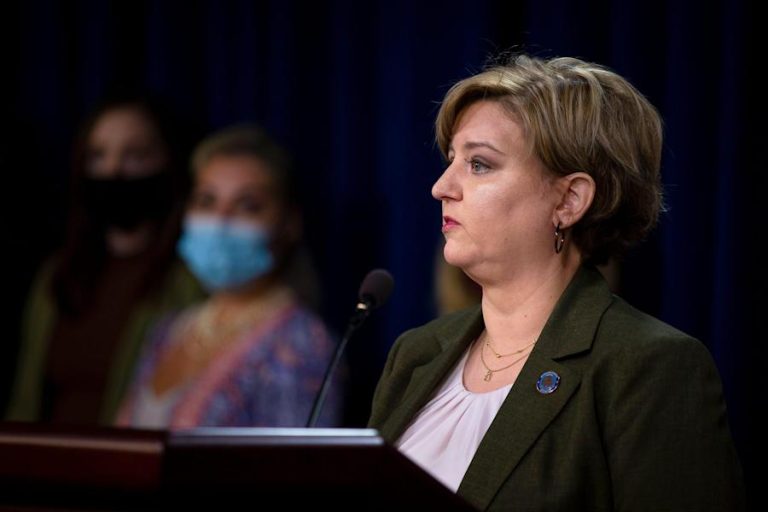 Maricopa County Attorney Allister Adel is resigning after multiple calls for her removal by prosecutors and elected officials who questioned her leadership over a host of issues, including her sobriety, her absences from official duties and recent revelations that her office failed to file dozens of misdemeanor criminal charges in a timely fashion.

“Today, I announce my decision to resign as the Maricopa County Attorney,” Adel said in a statement Monday. “I am proud of the many accomplishments of the Maricopa County Attorney’s Office during my tenure, including policies that seek justice in a fair and equitable manner, hold violent offenders accountable, protect the rights of crime victims, and keep families safe.”

Lola N’sangou is the executive director of Mass Liberation Arizona, a black-focused organization that seeks to end over-incarceration and funding of the criminal justice system. The group for months had demanded Adel be removed from office.

“This office has had a legacy of brutality, and Alister Adel is but one of many leaders in that office who has used and weaponized this office,” N’sangou said. “There’s a culture and a legacy of brutality that has gone on for decades, so, while Adel is one person who needs to be held accountable, there is a deeper culture within that office that needs to be addressed as well.”

Adel’s resignation is a win for the community, she said, and should be dedicated to every black person in Arizona who has been “told that we are only 5% of the population and our political interests are not a priority.”

N’sangou said it’s important to remember that Adel was appointed by the county Board of Supervisors – after County Attorney Bill Montgomery’s term was cut short in October 2019. Adel, a Republican, was elected to the office in November 2020 and is the first woman to hold that office.

N’sangou said when the supervisors consider the next appointee, they should allow the community to weigh in.

“Allister Adel was their poor choice, and then when they were called to hold her accountable and address the issues within the office, they didn’t do anything,” she said. “The biggest concern that we have right now is to make sure that the community is involved and allowed to weigh in on any appointments.”

The Maricopa County Attorney’s Office is responsible for all adult and juvenile felony cases and misdemeanors filed in the justice court. The county attorney makes decisions about criminal prosecutions, but in recent months, calls for Adel’s resignation intensified as allegations of alcohol misuse, multiple absences from work and mishandling of cases came to light in an investigation by the Arizona Republic.

Adel had stood firm as pressures mounted. In a March 8 interview with Arizona PBS, she said she had no plans to quit, despite a letter from county prosecutors asking for her resignation because of “obvious signs of impairment.”

“They are very wrong. I’d love to see what they’re talking about,” Adel told Arizona PBS. “No one has shown me anything, and I’d love for them to point at it because I haven’t been. It’s tough to prove a negative, you know?”

Adel also disputed claims that her anxiety and eating and alcohol use disorders were affecting her job performance.

“I take my job duty very, very seriously, so those are absolutely false,” she said.

The Republic investigation found that her staff and elected officials, from top prosecutors to Gov. Doug Ducey, scrutinized Adel and questioned her sobriety and multiple absences.

The Republic reported that the Arizona Attorney General’s Office on Friday asked for a report on how Adel’s office failed to file 180 misdemeanor charges, with Ducey calling the failure “unacceptable.”

“My concern is really for the victims of these crimes, and for the accountability and competence of the office, and that’s where the opportunity and the fix lies,” Ducey told the Republic.