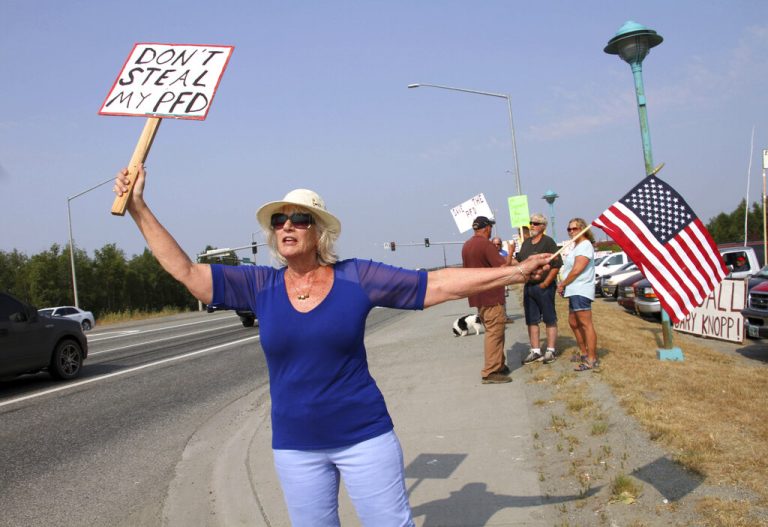 Simmering public anger in Alaska over the legislature’s failure to settle the state’s most radioactive issue — how big a check residents should receive from the state’s oil wealth fund — is colliding with a once-a-decade opportunity for political activists: The chance for voters to call a convention to amend the state’s constitution.

The frustration over the long-festering oil check question is providing a tail wind for groups seeking to change the constitution to address a range of hot button topics, such as restricting abortion and altering the process for selecting judges in a way that opponents say could make the process more partisan.

This year’s political turbulence could turn what is usually an overlooked ballot question into a high-stakes fight over the direction of the state. A convention would open Alaska’s foundational document to any type of revision, something opponents consider dangerous in an era of deep partisan divides, culture wars and campaigns fueled by deep-pocketed donors from out of state.

Talking about changing the constitution is “like walking around in a dynamite storage room with a lighter. You better know what you’re doing,” said John Coghill, a conservative former state lawmaker whose father was one of the delegates to Alaska’s original constitutional convention.

Alaska is one of three states where voters will decide this fall whether to call a convention to consider amendments to their constitution. The question has gained little attention in Missouri and has generated only mild interest so far in New Hampshire, where a group opposed to COVID-19 mandates and restrictions has discussed starting a campaign to advocate for a convention. That group, Rebuild NH, hasn’t yet said what amendments it might favor.

In all, 14 states are required to hold periodic elections asking voters whether to convene a constitutional convention. Delegates typically have free reign to propose revisions — or even entirely new constitutions — that would then go back to voters for ratification.

State constitutional conventions called by voters have become increasingly rare. More than 30 such ballot questions have failed since Rhode Island voters last authorized one in 1984.

Voters in New Hampshire haven’t authorized one since 1982. Delegates at that gathering debated more than 100 amendments, with 10 making it to the ballot. Voters approved six, including measures that required the legislature to meet annually instead of every other year and ensuring polling places would be accessible to disabled voters.

The country is more divided today.

“Whereas at one point a constitutional convention was seen as a way to empower the people and overcome challenges that they saw with the operation of government, the people now no longer have trust that constitutional conventions will work out,” said John Dinan, a political science professor at Wake Forest University who studies the topic. “There’s significant fear of runaway conventions or opening the Pandora’s box of issues.”

That’s what is emerging in Alaska, where some groups are taking sides on the question that will be on the November ballot.

This year’s vote will follow an expected mid-year decision by the U.S. Supreme Court in a case that could severely erode abortion rights across the country. The Alaska Supreme Court has interpreted the state constitution’s right to privacy as encompassing abortion rights, but many conservatives want to do away with that interpretation.

The conservative Alaska Family Council says it considers calling for a convention one of its top priorities. It supports an amendment saying nothing in the constitution may be construed as protecting a right to abortion. The group also is supporting issues related to school choice and changes to the judicial selection process.

Existing precedent in the state provides “pretty significant insulation” for Alaska women “to continue to have reproductive choice,” said Susan Orlansky, interim executive director of the American Civil Liberties Union of Alaska. But she said her group is concerned about the potential for a convention. A convention carries the risk of possible changes to the constitution that could undermine those protections, she said.

A prominent advocate for a convention is Bob Bird, chair of the Alaskan Independence Party, which is one of the three recognized political parties in the state and considers itself a blend of conservative Republicanism, populism and libertarianism. Among other things, Bird has urged changes to the judiciary.

Critics of a convention say the heated political environment makes this a bad time to open the state constitution, but Bird disagrees: “If we didn’t have this environment, it wouldn’t even be considered. It would be brushed off like it has (been) in the past.”

The last time the question was on the ballot in Alaska, in 2012, voters rejected calling for a convention by a nearly 2-to-1 margin.

Republican former lawmakers, including Coghill, Democratic former mayors and a union leader have joined as part of a group called Defend Our Constitution to oppose a convention. They worry that deep-pocketed outside interests will try to influence the process and that business interests might delay investments in Alaska while it plays out.

Bruce Botelho, a Democrat involved with the convention opposition group, said there are “a lot of people who are just generally angry at government and this may be their opportunity to cast a vote to express their frustrations at government.”

Supporters say the fears are overblown and that if voters do approve a convention, sharply divisive issues are unlikely to go far.

Similar concerns have prevented a constitutional convention at the federal level, which several Republican-led states have proposed in recent years as a way to pass a balanced budget amendment. Those wary of constitutional conventions generally say they worry about the possibility of the gatherings turning into free-for-alls — Democrats seeking to mandate spending for social welfare programs, for example, and Republicans trying to outlaw abortion or prohibit any type gun control.

Successful constitutional conventions during the last century were aided by bipartisan cooperation, said Justin Dyer, director of the Kinder Institute on Constitutional Democracy at the University of Missouri.

“We have a very tense partisan time right now,” he said. “The idea of having good will from both parties … it’s hard to know if we would be able to do that or not.”