Sinema cited in new book, but analysts wonder what impact it will have – Cronkite News 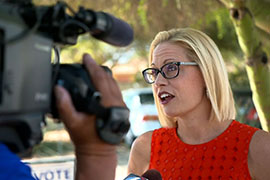 Political analysts say it’s too soon to tell what impact, if any, a new book about the Biden administration’s first year will have on Sen. Kyrsten Sinema, D-Arizona, who is reportedly quoted in the book as mocking the president.

The book, “This Will Not Pass,” by New York Times reporters Jonathan Martin and Alex Burns, also cites unnamed sources who say Sinema praised Rep. Andy Biggs, R-Gilbert, the leader of the conservative Freedom Caucus, and suggested that other moderate Senate Democrats privately support her.

Sinema’s office said Wednesday that it would not comment on what it called the book’s unsourced rumor. But one analyst said the reports, which have already generated buzz in political circles, amount to just another item on “the pile of things that Democrats are mad at Kyrsten Sinema about.”

“It’s a growing pile and the pile as a whole matters, but whether this particular report makes a substantial difference, it’s still very early,” said Jacob Rubashkin, a reporter and analyst for Inside Elections, who noted she is not up for re-election for another two years.

The excerpts in the book were first reported Wednesday by Axios, which got an advance of the book. A review copy of the book was not immediately available, but a spokesperson for the authors said they stand behind their reporting.

The book also claims that Sinema discouraged Biden from coming to Arizona after signing the American Rescue Plan, a $1.9 trillion COVID-19 relief package approved last March, and asked why she had to wear a mask to the White House when she had been vaccinated, according to the Axios report. It said the book cites an unnamed source close to the president who said Biden was perplexed by Sinema, comparing it to “his difficulty grasping his grandchildren’s use of … TikTok. He wanted to relate, but he just didn’t quite get it.”

Rubashkin said such depictions would not be unexpected about a senator who has been in hot water with fellow Democrats for months over her support for the filibuster, which Republicans have used to block votes on parts of Biden’s agenda in the evenly divided Senate.

The Arizona Democratic Party in January censured Sinema over her refusal to kill the filibuster, and more than 100 Arizona LGBTQ+ leaders sent an open letter to the Human Rights Campaign Wednesday, urging it to pull its donations to Sinema’s campaign.

Sinema has also angered Democrats by her refusal to approve a federal minimum wage increase and her work with Republicans to stall the administration’s Build Back Better plan.

But Jason Rose, a Republican political consultant in Arizona, noted that Sinema’s warm attitude toward Republicans began during her days as a state legislator.

“When she was in the Arizona legislature (she) forged really interesting relationships with interesting Republicans,” Rose said. “That’s where she started her bipartisanship and the fact that she said nice things about colorful Republicans, isn’t that what we want more of in American politics?”

Neither Rose nor Rubashkin had read the book this week, but had only seen reports on social media and news sites. But Rose said the book’s reported negative comments from White House sources about Sinema could just as likely have been motivated by frustration that the president had been “unable to do what he said he could do … that he could work with the Senate to pass major legislation.”

“In this case, he couldn’t even work with senators of his own party to pass the legislation,” Rose said.

Both Rose and Rubashkin said White House pushback might not be a negative for Sinema, who has carefully cultivated a bipartisan persona. Despite the reported rift with the White House, Sinema was one of more than 30 members of Congress who were there Wednesday to watch Biden sign a bill reauthorizing the Violence Against Women Act, and she was back Thursday for the swearing-in of Shalanda Young as the director of the Office of Management and Budget.

“I would imagine that there are people around Sinema who think of that as a positive given how closely she has tried to take up the mantle of the late John McCain,” said Rubashkin, citing the former Republican senator from Arizona.

They both also noted that Sinema is not up for reelection until 2024, making it hard to determine how the book might affect her political career.

“She’s got two more years before she has to face voters, so I’ll be interested to see how she continues to play her hand,” Rubashkin said.

Rose agreed, noting that if Sinema can make it through the Democratic primary she is likely to survive the general election.

“I think Kyrsten Sinema is getting as close to a bulletproof general election candidate as the Democratic Party, or any party could offer in Arizona,” Rose said. “Her challenge, of course, is now the Democratic primary.”