US education secretary to Florida LGBTQ kids: Got your back 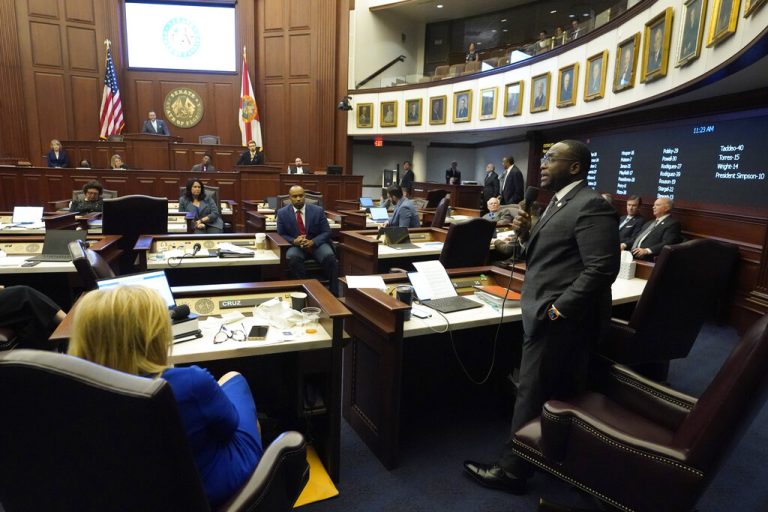 Photo: Florida Sen. Shevrin Jones, right, debates a bill, dubbed by opponents as the “Don’t Say Gay” bill, speaks right before the bill was voted on during a legislative session at the Florida State Capitol

In another clash between President Joe Biden’s administration and Florida Republican Gov. Ron DeSantis, U.S. Education Secretary Miguel Cardona spoke with LGBTQ students to say the federal government supports them even if the governor does not.

Cardona’s call Thursday with students, parents and teachers was a response to Florida legislation opponents call the “don’t say gay” bill, which forbids instruction on sexual orientation and gender identity in kindergarten through third grade. The Legislature passed the bill and DeSantis is expected to sign it.

“The goal here is not to create division. We just want these kids to be able go to school, learn, get the support that they need. All parents want that for their children,” Cardona said in a phone interview Friday. “We want to support all students, including our gay and transgender students, and they needed to hear that directly from me.”

The “don’t say gay” bill was one of several DeSantis pushed during the legislative session that many saw as a culture war he was creating to galvanize a conservative base as he considers running for president in 2024.

The bill states: “Classroom instruction by school personnel or third parties on sexual orientation or gender identity may not occur in kindergarten through grade 3 or in a manner that is not age appropriate or developmentally appropriate for students in accordance with state standards.” Parents would be able to sue districts over violations.

DeSantis has been outspoken in his support, saying that as a father of three young children, he doesn’t want them to be “sexualized” in kindergarten.

“We would say to Secretary Cardona the same thing we would say to anyone else with concerns about the bill — they should read it carefully in its final form, and not be misled by false media narratives,” DeSantis spokeswoman Christina Pushaw said in an email. “Developmentally appropriate education, which means no sex and gender theory instruction in grades K-3, promotes kids’ emotional well being.”

DeSantis has clashed with the Biden administration on a number of issues, from the coronavirus pandemic to immigration.

People on the call with Cardona said DeSantis is pushing backwards acceptance of LGBTQ people. They described the legislation as unnecessary and divisive.

“I wish our governor was as supportive as our secretary of education,” said Jennifer Solomon, a Miami-Dade County parent of a lesbian and a non-gender conforming 11-year-old son. “He has our back. He’s going to do everything he can from the federal level to make sure that our kids are still going to be protected and respected.”

Madeline Kopka, an 18-year-old high school student from Tallahassee, also was on the call.

“He told us about how he hates the bill that passed this past session and he will fight with us,” she said. “It’s going to kill children.”

She said for many LGBTQ children, trusted teachers can be a source of comfort to discuss their feelings.

“A lot of them can’t go home to their family and express who they really are. I think it’s a big problem and we’re just going back in time and it’s horrible,” she said. “I really don’t understand why (DeSantis) is doing this.”

Cardona declined to speculate on DeSantis’ motives, but did say the bill would have a negative effect on students.

“I had one parent tell me he’s using students as political pawns,” Cardona said. “I don’t know the motive; I will tell you the impact is creating a sense of fear and despair at a time when they need the most support.”

He called DeSantis’ push for the legislation “sad.”

“It’s an intentional effort to create division in our schools,” Cardona said. “Our country needs unity now, not division.”

1 thought on “US education secretary to Florida LGBTQ kids: Got your back”