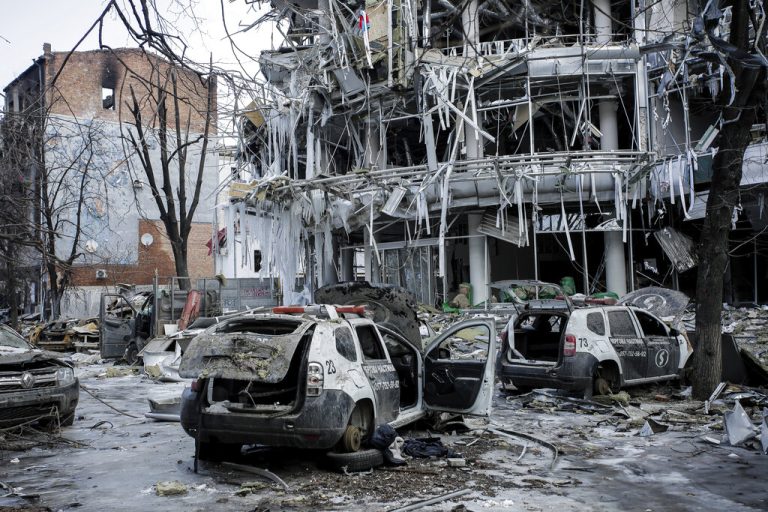 Russian forces destroyed a theater in Mariupol where hundreds of people were sheltering Wednesday and rained fire on other cities, Ukrainian authorities said, even as the two sides projected optimism over efforts to negotiate an end to the fighting.

The airstrike ripped apart the center of the once-elegant building, where hundreds of civilians had been living since their homes had been destroyed in the fighting, Ukraine’s foreign ministry said in a statement.

Many people were buried in the rubble, the statement said, though there was no immediate word on how many had been killed or injured. Satellite imagery from Monday showed the word “children” written in large white letters in Russian in front of and behind the building, the Maxar space technology company said.

“My heart breaks from what Russia is doing to our people,” Ukrainian President Volodymyr Zelenskyy said in his nightly address, calling for more sanctions on Russia after the bombing.

The Russian defense ministry denied bombing the theater or anywhere else in Mariupol on Wednesday.

In Kyiv, residents huddled in homes and shelters amid a citywide curfew that runs until Thursday morning, as Russian troops shelled areas in and around the city, including a residential neighborhood 2.5 kilometers (1.5 miles) from the presidential palace. A 12-story apartment building in central Kyiv erupted in flames after being hit by shrapnel.

And 10 people were killed while standing in line for bread in the northern city of Chernihiv, the Ukrainian General Prosecutor’s Office said.

Earlier Wednesday, Zelenskyy went before the U.S. Congress via video and, invoking Pearl Harbor and 9/11, pleaded with America for more weapons and tougher sanctions against Russia, saying: ” We need you right now.”

U.S. President Joe Biden announced the U.S. is sending an additional $800 million in military aid to Ukraine, including more anti-aircraft and anti-tank weapons and drones. He also called Vladimir Putin a “war criminal” in his sharpest condemnation of the Russian leader since the invasion began.

International pressure against the Kremlin mounted and its isolation deepened as the International Court of Justice, also known as the World Court, ordered Russia to stop attacking Ukraine, though there was little hope it would comply. Also, the 47-nation Council of Europe, the continent’s foremost human rights body, expelled Russia.

While Moscow’s ground advance on the Ukrainian capital appeared largely stalled, Putin said the operation was unfolding “successfully, in strict accordance with pre-approved plans.” He also decried Western sanctions against Moscow, accusing the West of trying to “squeeze us, to put pressure on us, to turn us into a weak, dependent country.”

A senior U.S. defense official said the Russians were still making little tangible progress in much of the country, but have begun shelling the suburbs of Odesa, Ukraine’s third-largest city and a major naval and shipping hub. The official, who spoke on condition of anonymity to discuss U.S. military assessments, said Russia’s aims weren’t clear, but Western officials have long worried about a ground assault on the coastal city.

The two sides were scheduled to speak again Wednesday, but details of the talks or whether they took place weren’t immediately forthcoming. After Tuesday’s negotiations, Russian Foreign Minister Sergey Lavrov said a neutral military status for Ukraine was being “seriously discussed” by the two sides, while Zelenskyy said Russia’s demands for ending the war were becoming “more realistic.”

Hopes for diplomatic progress to end the war rose after Zelenskyy acknowledged Tuesday in the most explicit terms yet that Ukraine is unlikely to realize its goal of joining NATO. Putin has long depicted Ukraine’s NATO aspirations as a threat to Russia.

Lavrov welcomed Zelenskyy’s comment and said “the businesslike spirit” starting to surface in the talks “gives hope that we can agree on this issue.”

“A neutral status is being seriously discussed in connection with security guarantees,” Lavrov said on Russian TV. “There are concrete formulations that in my view are close to being agreed.”

Russia’s chief negotiator, Vladimir Medinsky, said the sides were discussing a possible compromise for a Ukraine with a smaller, non-aligned military.

Prospects for a diplomatic breakthrough were highly uncertain, however, given the gulf between Ukraine’s demand that the invading forces withdraw completely and Russia’s suspected aim of replacing Kyiv’s Westward-looking government with a pro-Moscow regime.

Another source of dispute is Crimea, which was seized and annexed by Russia in 2014, and the separatist-held Donbas region in eastern Ukraine, which Russia recognizes as independent. Ukraine considers both part of its territory.

The fighting has led more than 3 million people to flee Ukraine, by the United Nations’ estimate. The overall death toll remains unknown, though Ukraine has said thousands of civilians have died.

Speaking to Congress, Zelenskyy said that Russia “has turned the Ukrainian sky into a source of death.” But Biden has rejected Zelenskyy’s requests to send warplanes to Ukraine or establish a no-fly zone over the country because of the risk of triggering war between the U.S. and Russia.

Amid the vast humanitarian crisis caused by the war, the Red Cross has helped evacuate civilians from besieged areas and has delivered 200 tons of aid, including medical supplies, blankets, water and over 5,200 body bags to help “ensure the dead are treated in a dignified manner.”

Nowhere has suffered more than the encircled city of Mariupol, where local officials say missile strikes and shelling have killed more than 2,300 people. The southern seaport of 430,000 has been under attack for almost all of the three-week war in a siege that has left people struggling for food, water, heat and medicine.

Local authorities said Russian forces took hundreds of people hostage at a Mariupol hospital and were using them as human shields.

Using the flashlight on his cellphone to illuminate a hospital basement, Dr. Valeriy Drengar pulled back a blanket to show the body of an infant 22 days old. Other wrapped bodies also appeared to be children, given their size.

“These are the people we could not save,” Drengar said.

Nearly 30,000 people managed to escape the city Tuesday in thousands of vehicles by way of a humanitarian corridor, city officials said. Zelensky said 6,000 more left on Wednesday, including 2,000 children, but evacuations elsewhere were stopped because of Russian shelling.

Kyiv regional leader Oleksiy Kuleba said Russian forces had intensified fighting in the Kyiv suburbs and a highway leading west, and across the capital region, “kindergartens, museums, churches, residential blocks and engineering infrastructure are suffering from the endless firing.”

In other developments, the mayor of the city of Melitopol, who was seized by Russian forces five days ago, has been freed, said Zelenskyy chief of staff Andriy Yermak. No details were given about how he became free.

Ukraine also appeared to have successes, with satellite photos from Planet Labs PBC analyzed by The Associated Press showing helicopters and vehicles ablaze at the Russian-held Kherson airport and air base after a suspected Ukrainian strike on Tuesday.

Associated Press writer Lolita C. Baldor in Washington and other AP journalists around the world contributed to this report.