Ukraine war may lead to rethinking of US defense of Europe 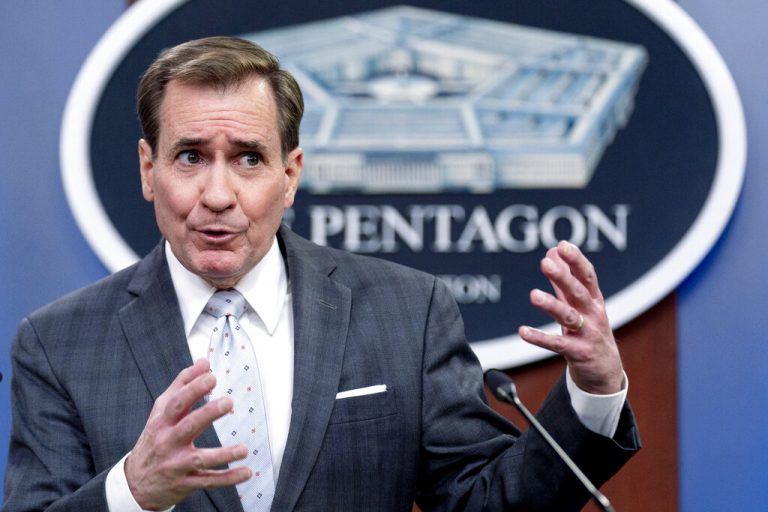 Photo: Pentagon spokesman John Kirby speaks during a briefing at the Pentagon in Washington

Russian President Vladimir Putin’s war in Ukraine and his push to upend the broader security order in Europe may lead to a historic shift in American thinking about defense of the continent. Depending on how far Putin goes, this could mean a buildup of U.S. military power in Europe not seen since the Cold War.

The prospect of a bigger U.S. military footprint in Europe is a remarkable turnaround from just two years ago.

In 2020, President Donald Trump ordered thousands of American troops out of Germany as part of his argument that Europeans were undeserving allies. Just days after taking office, President Joe Biden stopped the withdrawal before it could start, and his administration has stressed NATO’s importance even as Biden identifies China as the main long-term threat to U.S. security.

Then came Russia’s invasion of Ukraine.

“We are in a new era of sustained confrontation with Russia,” says Alexander Vershbow, a former U.S. ambassador to Russia and former deputy secretary-general of NATO. He argues that the United States, in cooperation with NATO allies, will need to establish a more muscular stance to deal with a more threatening Russia. That is especially so in Eastern Europe, where Russia’s proximity poses a problem for the three Baltic nations that are former Soviet states.

Defense Secretary Lloyd Austin was flying to Europe on Tuesday for his second recent round of Ukraine consultations at NATO headquarters in Brussels. He also will travel to two Eastern European NATO countries — Slovakia, which borders Ukraine, and Bulgaria, which does not. After a NATO meeting last month, Austin visited two other allies on the eastern flank — Poland and Lithuania.

As Austin was en route, NATO Secretary-General Jens Stoltenberg made it clear Tuesday that the 30-nation military alliance is set to radically change its security stance in Europe in response to Russia’s war on Ukraine. He said defense ministers will discuss possible changes when they meet Wednesday.

“We need to reset our military posture for this new reality,” Stoltenberg told reporters. “On land, this could include substantially more forces in the eastern part of the alliance, at higher readiness, and with more prepositioned equipment.”

He added that NATO “will also consider major increases to our air and naval deployments, strengthening our integrated air and missile defense, reinforcing our cyber defenses, and holding more and larger exercises.”

In just the past two months, the U.S. presence in Europe has jumped from about 80,000 troops to about 100,000, which is nearly as many as were there in 1997 when the United States and its NATO allies began an expansion of the alliance that Putin says threatens Russia and must be reversed. By comparison, in 1991, the year the Soviet Union dissolved, the United States had 305,000 troops in Europe, including 224,000 in Germany alone, according to Pentagon records. The number then dropped steadily, reaching 101,000 in 2005 and about 64,000 as recently as 2020.

This year’s U.S. troop additions are billed as temporary, but there’s no certainty how long they’ll stay. They include an armored brigade of the 1st Infantry Division, totaling about 4,000 soldiers, to Germany, and a similar-size infantry brigade of the 82nd Airborne Division, to Poland. Numerous Army headquarters units also have been sent to Poland and Germany. Austin also sent F-35A fighter jets to NATO’s eastern flank and Apache attack helicopters to the Baltic states.

A recent Pentagon review of its worldwide military presence concluded that troop levels and positions in Europe were about right. But in testimony before a House committee several days after Putin invaded Ukraine, Mara Karlin, a senior Pentagon official who oversaw the 2021 review, said that conclusion will have to be reconsidered.

The Pentagon must “ensure that we’ve got deterrence of Russia and that we can absolutely 150% say that NATO is safe and secure,” not just in light of Russia’s invasion but for the longer term, she said March 1.

Putin’s war in Ukraine has prompted a rethinking of regional defense needs not just by Washington but also some European allies, including Germany, which last month broke with a longstanding policy of not exporting weapons to conflict zones by sending anti-tank and anti-aircraft weapons to Ukraine. Germany also committed to a much bigger defense budget.

Putin has not only demanded that Ukraine disavow its ambition to join NATO but also insisted the alliance withdraw its forces from NATO’s eastern flank — demands the U.S. and NATO reject as counter to the fundamental rights of nations to decide their foreign relations for themselves and of NATO’s basic commitment to provide security for all members equally.

If Russia were to take control of the entirety of Ukraine, it would be on the border of additional NATO countries, including Romania, Slovakia and Hungary. Poland and Lithuania already share a land border with the Russian enclave of Kaliningrad, headquarters of the Baltic Fleet of the Russian Navy. There is concern that Putin could decide to make a play for control of that 60-mile-long land corridor, known as the Suwalki Gap, that connects Kaliningrad to Belarus.

Vershbow, the former deputy NATO secretary-general who is now a distinguished fellow at the Atlantic Council, recommends that the U.S. and NATO move beyond their current reliance on light, battalion-size battle groups in Eastern Europe to instead deploy heavier, larger and permanent forces there.

Such a transition on NATO’s eastern flank is just the sort of thing Putin says is a threat to Russia and says he will no longer tolerate. He has demanded a return to the arrangements that existed in 1997, when the NATO-Russia Founding Act was signed.

In that document, Moscow acknowledged that NATO would go ahead with plans to invite Poland, Hungary and the Czech Republic to join the alliance. Notably, the document also said that “in the foreseeable security environment,” NATO would forgo “additional permanent stationing of substantial combat forces on the territory of new members.”

Does that foreclose the option of a U.S. troop buildup in Eastern Europe? No, says a new report by the Atlantic Council’s Scowcroft Center for Strategy and Security. It argues that the restrictions on NATO’s military presence in Eastern Europe as described in the 1997 NATO-Russia Founding Act are irrelevant in light of Russia’s invasion of Ukraine.

“We are in new, dangerous territory — a period of sustained tensions, military moves and countermoves, and major intermittent military crises in the Euro-Atlantic area that will ebb and flow for at least the remainder of the 2020s, if not longer,” the report says.