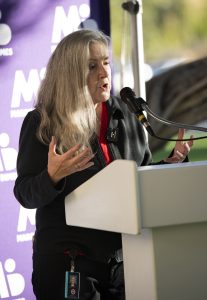 Advocates are pushing Arizona lawmakers to expand Medicaid coverage for women after they give birth, to help improve maternal health outcomes and combat rising pregnancy-related deaths.

Medicaid – which is administered by the Arizona Health Care Cost Containment System, or AHCCCS – covers women for up to 60 days postpartum, but Senate Bill 1272 would extend coverage to 12 months after birth for inpatient or outpatient care, medications and other services. It also would begin covering care provided by a midwife.

The measure has passed the Senate and is pending in the House. It appears to have bipartisan support, with advocates stressing the expansion is vital for women who experience complications during pregnancy or physical or emotional problems postpartum.

“We know … that women are dying unnecessarily, and part of the problem is a lack of postpartum care,” said Rep. Pamela Powers Hannley, D-Tucson, a co-sponsor of the bill.

At a recent rally at the state Capitol, Katie Wilton, senior philanthropy officer at Phoenix Children’s Hospital, recalled her own difficulty recovering after her daughter was born prematurely.

“My body was going through all kinds of trauma that was unexplained at the time,” she said, adding that she waited five to six weeks to seek help coping with the emotional effects of the birth.

“I was in a very fortunate position where I had private insurance, but for those women or those families that are covered by Medicaid, they barely would have had any time left to get what they need if they were in the same position as me.”

The legislation would expand the definition of those eligible for coverage under AHCCCS to families whose income does not exceed 150% of federal poverty guidelines, meaning more women would be eligible.

Almost half of all births in the United States are covered by Medicaid. Federal law requires coverage until 60 days after delivery, but a provision of the American Rescue Plan Act of 2021 gave states an option to extend that coverage to 12 months.

About 700 women die each year in the U.S. of pregnancy-related deaths. Those are deaths that happen during pregnancy or delivery – or up to a year postpartum – from a complication, a chain of events initiated by pregnancy or the aggravation of an unrelated condition, according to the Centers for Disease Control and Prevention.

These deaths have been increasing, although the vast majority are preventable, according to the CDC. Black and Indigenous women are two to three times more likely to die than white women.

In addition to deaths directly related to pregnancy, even more women die of what’s considered a pregnancy-associated death, meaning of any cause within a year of giving birth.

In Arizona, about 70 women die every year within 365 days of giving birth, according to a report by the state Department of Health Services, which estimates 84% of these deaths are preventable.

Substance use and mental health conditions were the top factors in pregnancy-associated deaths in the state, contributing to 38% and 28% of deaths, respectively.

“We have to remember that pregnancy and postpartum is one of the most vulnerable times in a woman’s life … and the mood changes that occur are the No. 1 complication of pregnancy,” said Michelle Lacy, executive director of Women’s Health Innovations of Arizona, which provides mental health counseling and services during and after pregnancy.

“There’s this myth that this should be this happy time: ‘I should always have a smile on my face, and if I don’t, then something might be wrong with me,’” Lacy said.

“Investing in the health of mothers is critical – not only for mitigating the risk of maternal deaths, but it also makes a lot of fiscal sense to invest in health of mothers who are … often the main caregiver for families,” Herrick said.

The state maternal health report found that the majority of pregnancy-associated deaths occurred 43 days to 365 days after a woman gave birth, when Medicaid coverage begins to wane. Maternal health advocates argue that had those women had access to care, they may be alive today.

In a statement in support of SB 1272, the nonprofit Children’s Action Alliance said: “Sixty days is not much time to recover from childbirth. And it means many people are forced to forgo necessary postpartum health care due to the expense. For people with physical or mental health complications after pregnancy, having reliable health coverage can mean the difference between life and death.”

Although other developed nations have reduced maternal deaths, the United States still struggles. In 2018, there were 17 maternal deaths for every 100,000 live births in the U.S. – a ratio more than double that of other high-income countries, a report by the Commonwealth Fund found. One factor is a shortage of midwives, OB-GYNs and other maternal care providers.

Midwives, in particular, are underutilized in health care, according to Women Deliver, a New York group that advocates for better health care for women and girls. Midwives have supported women in childbirth for centuries and are linked to lower rates of preterm birth and shorter hospital stays.

The Commonwealth Fund report found that the U.S. and Canada have the lowest rates of midwives available, compared with nine other countries.

In Arizona, women living in rural areas have less access to care because of a lack of hospitals with obstetric providers. Disparities are starkest in La Paz, Greenlee, Gila, Graham, Cochise and Santa Cruz counties, according to a report by the Center for Rural Health at the University of Arizona.

Many of these women who live in maternal care deserts have to travel long distances for appointments, usually more than 30 minutes.

Powers Hannley remembers her own journey as a single, uninsured mother living in Tucson 40 years ago. She recognized having a supportive community of doctors and women who were going through similar struggles was vital for her physical and mental health.

Not all women have that kind of support, she said, especially amid the pandemic.

“We supported each other, we exercised together, we stayed together as a group. And we don’t see that today,” she said. “Women are disconnected. They’re alone. They’re desperate, especially some of them now with COVID.”

PrevPreviousOpinion: Is There a Peace Deal Putin and Zelensky Can Accept? – Patrick Buchanan
NextOpinion: Don’t Be Distracted: Fiscal Policy Drives Our Inflation Surge – Inside SourcesNext