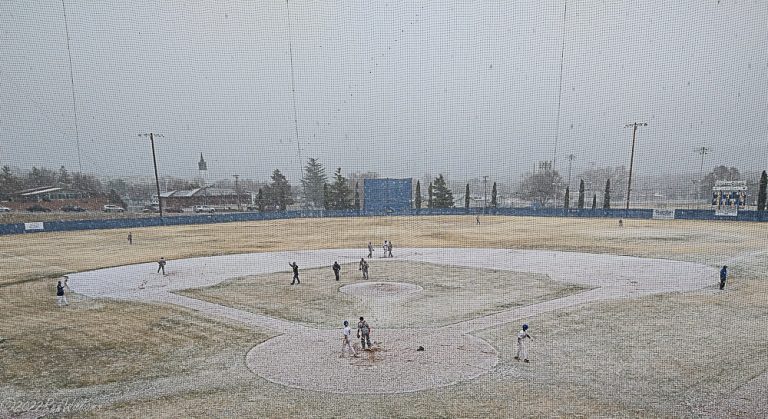 Photo: The day before saw a snowstorm blanket the field in Prescott, forcing the umpires to call the game with one out in the fourth inning. No information yet on when the game with Mingus will be finished.

The Prescott Badgers picked up a much needed win with a road victory over the Lee Williams Volunteers in Kingman. After the snowstorm debacle the day before at home versus Mingus, the Badgers were more than happy to play in much better conditions.

Tyson Potts picked up the win, going the distance allowing no earned runs, five hits, while striking out six, and issuing two walks. At the plate, the Badgers had six extra base hits. Jacob McElfresh, Josh Miller, Ethan Ammerman, Luke Carmack, and Potts, all had one double. Alex Vaughan had a triple.  Cole Gross, McElfresh, Carmack, and Potts each had an RBI.

Prescott (2-1) in the Grand Canyon Region, and (3-2) overall, will play at the Route 66 Tournament, with a doubleheader on both Thursday and Friday. A single game is scheduled on Saturday. Games will be played at Needles (CA) High School and River Valley High School (AZ).  Thursday the Badgers will face Needles at Needles at 10:00 am. The second game will be at River Valley at 2:00 pm versus Central (CA). Friday games will both be at River Valley, and the opponents will be Lake Havasu at 8:00am, and Southwest (El Centro, CA) at Noon. The Saturday contest will be at Needles versus Palo Verde (Blythe, CA) at Noon.