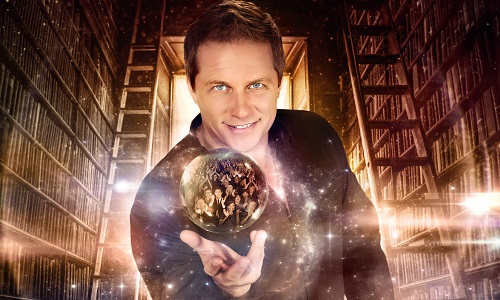 Back in 2020, a worldwide pandemic made a hotly anticipated magician disappear from the local entertainment calendar. Now, after two mysterious years, Mike Super is back to turn a windy March evening into a memorable night out that will have your family comparing notes all the way home. Join us Saturday night, March 26, at 7 p.m. when Mike Super: Magic & Illusion returns to Yavapai College Performing Arts Center.

The only magician to win a live magic competition on primetime U.S. network television, Mike Super has astonished millions of people with his craft. A favorite of both the syndicated and late-night talk show circuits, Mike’s charming combination of everyman modesty and jaw-dropping illusions have made him a favorite on The Tonight Show, Ellen, The Late Late Show with Craig Ferguson, and many others.

Mike first caught national attention when he won the title of “America’s Favorite Mystifier” on the NBC TV series Phenomenon. He has since become a Finalist on America’s Got Talent, wowed Penn and Teller on their cable series FOOL US and garnered a host of lofty titles from all over the country, including: “Entertainer of the Year,” “Best Performing Artist of the Year” and “Best Novelty Performer of the Year.”

The secret to Mike’s success lies in is his natural ability to entertain and fascinate people. As he forged his lifelong passion for magic into a career, Mike pioneered a modern style with his own inimitable, down-to-earth personality. By swearing off the pretentious strut and theatrics of many contemporary illusionists, Mike brought the art of magic back to the people. He transcends the “trick” and connects personally with his audience.

His appeal as a family-friendly magician, has made Mike one of the most sought-after mystifiers in the world! He has developed a loyal fan base – who proudly call themselves “The Superfreaks” – who now number in the millions. Whether he is on television, onstage or simply one-on-one, Mike Super’s personality and humor reaches out and enchants the public.