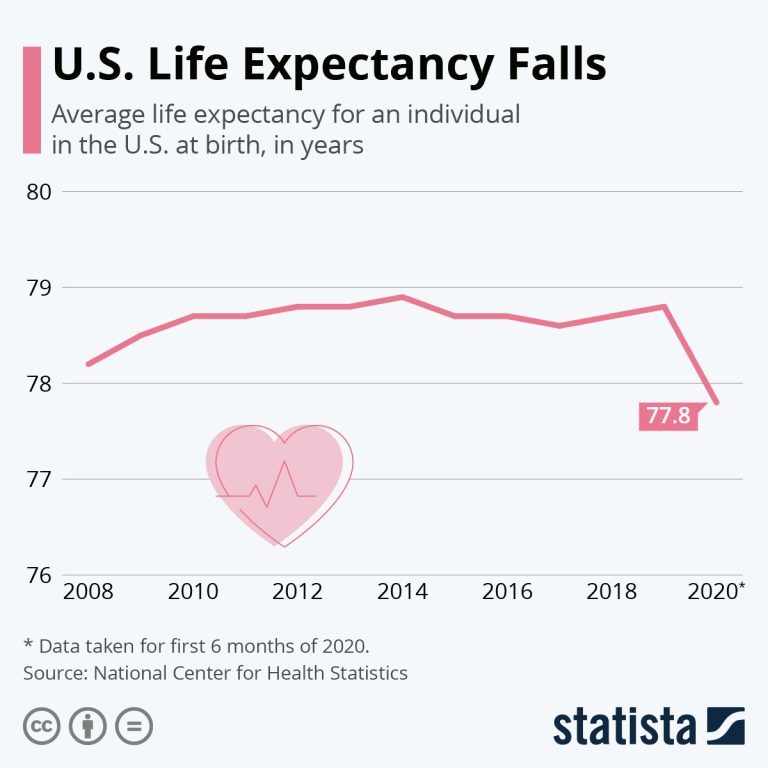 U.S. life expectancy fell by an “unprecedented and shocking” 1.8 years between 2019 and 2020, a dramatic drop that experts say can only partly be blamed on the first year of the COVID-19 pandemic.

The drop, from a life expectancy of 78.8 years to 77 years, could also have come from existing issues with obesity, opioids and suicide, officials say. It was the largest single-year drop since 1943, according to a December report by the Centers for Disease Control and Prevention.

“It is no question that … at least for the last four years, opioids, obesity, and then getting hit with COVID has really just resulted in more people dying much sooner than they should have,” said Dr. Georges Benjamin, executive director of the American Public Health Association.

Swapna Reddy, a clinical associate professor at Arizona State University’s College of Health Solutions, called the fall in life expectancy “an unprecedented and shocking … world event” that is “bigger than anyone anyone would have predicted.”

“We have not seen a dip like this since literally a world war … I think it really starts putting into perspective the effect of COVID-19 on our population,” she said.

Reddy said that while much of the drop in 2020 was caused by the virus, “staggering” prepandemic increases in suicide, heart disease and diabetes also impacted life expectancy.

Benjamin said the country had been “on a pretty good pathway” toward longer lifespans as a result of changes such as a reduction in unhealthy habits like smoking. Then COVID-19 hit.

Benjamin said a drop in life expectancy of the size seen between 2019 and 2020 could take “10 years or more” to recover from.

“It’s a big deal. And you don’t get that back right away,” he said. “You know, you can’t do a lot of magical things and all of a sudden, the next year you gain those two years back in life expectancy.”

And the full extent of the pandemic’s effects on conditions like cancer has not been seen yet, according to Allan Williams, an adjunct assistant professor at the University of Minnesota School of Public Health. He said fewer people were able to visit a physician for regular screenings in 2020, which delayed them from receiving life-saving treatments.

“If you don’t get your mammogram … it’s not going to be an immediate death,” Williams said. “It just means that by the time they do find it (breast cancer) … you’re at a more advanced stage, and so death is going to occur sooner.”

Reddy noted this same risk of putting off preventive and curative measures, adding that fewer children received scheduled vaccines during the height of the pandemic.

“What’s going to be the result of all of that, when we kind of come through the COVID fog?” Reddy said. “I think unfortunately, the answer is not great.”