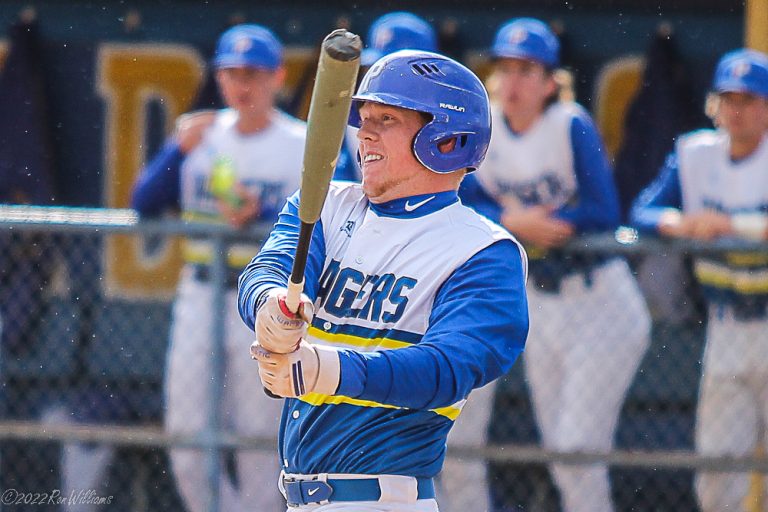 Photo: Ethan Ammerman singles in a pair of runs in the third inning, and accounted for all three RBIs on the day

The Wolves, who sounded more like a bunch of wild coyotes throughout the day, jumped on top with a single run in the top of the first two innings. Relief pitcher Aiden Banuelos threw the final three innings to pick up the win. The senior also contributed with a pair of doubles, and scoring a run. Canon Skrimager had a pair of RBIs on two singles, and also scored a run. Garrett Sloan picked up the other RBI. Estrella Foothills took advantage on the base paths, stealing 8 bases in 10 attempts for the game.

Trailing 2-0, the Badgers tied the game in the bottom of the third. Ethan Ammereman’s single scored Jacob McElfresh and Luke Carmack.

Estrella Foothills took the lead for good in the fifth with a pair of runs. Banuelos doubled and scored on a ground out by Sloan. Ryan Orivs came in to pitch, relieving starter Paul Fernow, who went 4.1 innings, allowing three runs. The second run of the inning came on a walk, stolen base, and single by Skrimager. Orvis got out of the inning with no further damage, as he picked off the runner at second, then striking out the final batter to end the inning.

Down 4-2, Prescott pushed across a run when Ammerman’s one out single scored Luke Carmick, who had started off the inning with a single. Brendan Costes followed with a single but was the first of the two outs in an inning ending double play.

Despite stranding runners on base, it looked like the Badgers would get a chance in their final at bat trailing by just one run at 4-3.  The top of the seventh was a costly one for Prescott, as they allowed a pair of runs as the rain came down. An error, a walk, and a passed ball, and a single and a double, resulted in two runs that increased the deficit to three.

The Badgers came up in their final at bat as the temperature sat at 40*. A one out double by Luke Carmick, followed Costes being hit by the pitch, brought the tying run to the plate. Ammerman hit a ball into the “bermuda triangle” of short centerfield, dropping in between three Wolves. The Prescott runner was unable to make it to second base in time, resulting in a force out for the second of the inning. Another chance with the tying run at the plate, and another short fly ball to shallow center, this time caught to end the game.

Prescott (1-2) will try to get back on track next Tuesday, with a Grand Canyon Region road game at Mingus. Estrella Foothills improved to (4-1).

The Badgers rolled to another lopsided victory with a 16-0 win versus Estrella Foothills in Goodyear.

Eliza Legge tossed a one hitter while striking out 13, with no walks for the win. Ava Hlavacek was a perfect four for four with two singles, a double, and a home run, with three RBIs. Eliza Legge helped her own cause with three hits, and two RBIs. Leigha Walker and Ruby Tessman also had three hits combing for five RBIs. The Badgers also had five stolen bases, with three by Tessman.

The Badgers led throughout and scored in each of the shortened five innings, and have scored an amazing 41 runs in their last two contests.