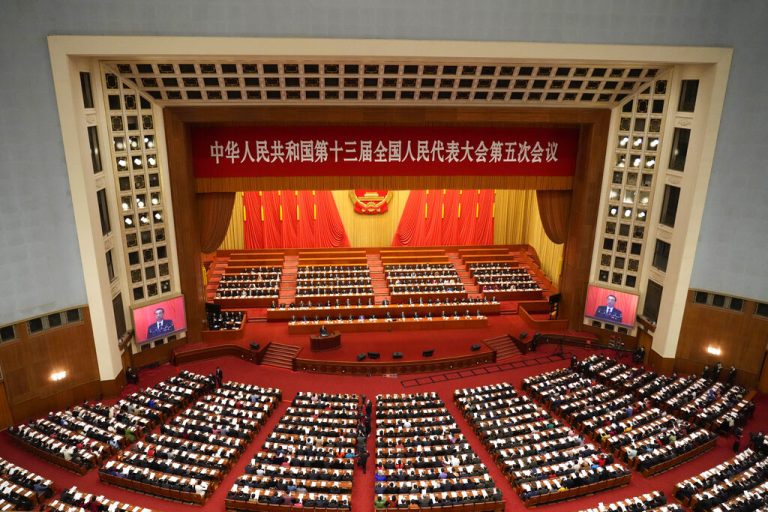 China on Saturday cut its annual economic growth target to its lowest level in decades as Beijing struggles to reverse a slump at a time when Russia’s war on Ukraine is pushing up oil prices and roiling the global economy.

The ruling Communist Party will aim for “around 5.5%” growth this year, down from last year’s 8.1% expansion, the country’s No. 2 leader, Premier Li Keqiang, said in a report to the ceremonial legislature. It noted commodity prices are surging but made no mention of the reason: the attack by Beijing’s ally, Russian President Vladimir Putin.

“Achieving this goal will require arduous efforts,” Li said during a 55-minute speech before legislators in the Great Hall of the People in central Beijing.

Forecasters say Putin’s attack on Ukraine should have little impact on China, though the energy-hungry economy might suffer from higher oil prices.

The ruling party has tried to distance itself from Putin’s war by calling for dialogue but has refused to join other major governments in condemning the attack. Beijing has denounced trade and financial sanctions on Moscow and says Washington is to blame for the conflict.

Chinese economic growth slid to just 4% over a year earlier in the final quarter of 2021 after a crackdown on debt in China’s vast real estate industry triggered a slump in construction and housing sales. Forecasts of this year’s economic growth by the International Monetary Fund and private sector analysts are as low as 4.3%.

Li indirectly acknowledged the impact of Russia’s war on prices of oil, wheat and other commodities, saying they “remain high and prone to fluctuation,” but gave no indication of the reason.

“All of this is making our external environment increasingly volatile, grave and uncertain,” Li said.

Li’s report focused on the economy, social welfare and other domestic issues, in contrast to Tuesday’s State of the Union speech by President Joe Biden, which emphasized Russia’s attack on Ukraine and international efforts to pressure Putin to stop.

President Xi Jinping’s government is trying to steer the world’s second-largest economy toward slower, self-sustaining growth based on consumer spending instead of trade and investment but was alarmed by last year’s abrupt slowdown. It also is trying to reduce reliance on soaring corporate and household debt that Beijing worries is dangerously high.

Ruling party leaders responded to the slump by announcing a “policy pivot” in December toward shoring up growth and away from longer-term initiatives aimed at cutting debt and carbon emissions.

The economy also is under pressure from weak global demand for Chinese exporters, anti-coronavirus controls that have suspended access to major cities, supply disruptions and power outages.

“We must make economic stability our top priority,” Li’s report said. “In the face of new downward pressure, the task of ensuring stable growth needs to occupy an even more prominent position.”

No growth target was announced in 2020 after much of the economy was shut down to fight the virus. Last year’s target was “over 6%.” This year would be the first time since the 1990s the official target is below 6%.

The ruling party has promised tax cuts for entrepreneurs who generate jobs and wealth. Banks have been told to lend more. The government is injecting money into the economy through higher spending on building public works.

The ruling party is promising to build more solar, wind and other renewable power resources. But it also has eased pressure on utilities to restrain growth of climate-changing carbon emissions by burning less coal.

Energy efficiency will be “assessed with appropriate flexibility,” Li said.

Turning to COVID-19, Li said China needs to “constantly refine epidemic containment” but gave no indication Beijing might ease a “zero tolerance” strategy that has imposed strict travel and business controls. He called for accelerating vaccine development and “strengthening epidemic controls” in cities where travelers and goods from abroad arrive.

Also Saturday, the government announced a 7.1% increase in its military budget, up from last year’s 6.8% rise in reported spending. China has the world’s second-highest military budget after the United States and is investing in long-range, nuclear-capable missiles and other weapons to extend its power beyond its shores.

Li affirmed the ruling party’s insistence that Hong Kong “should be governed by patriots,” a key element in a campaign to crush pro-democracy activism in the former British colony.

The premier indicated no change in stance toward Taiwan, the island democracy that Beijing claims as part of its territory and has threatened to invade. The two sides have been ruled separately since splitting in 1949 after a civil war but have multibillion-dollar trade and investment ties.

Russia’s invasion of Ukraine has prompted suggestions Beijing might be more likely to use force against Taiwan if it sensed a lack of resolve on the part of the United States and its allies. The ruling party has offered no signs of changing its avowed approach of gaining control of Taiwan by peaceful means, without giving up the military option.

Beijing will “advance peaceful growth of relations across the Taiwan Strait and the reunification of China,” Li said. “We firmly oppose any separatist activities seeking ‘Taiwan independence’ and firmly oppose foreign interference.”