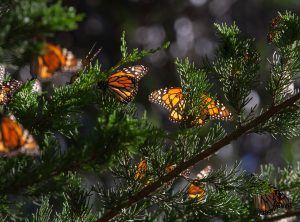 From a distance, trees draped in monarch butterflies would glow orange and flutter in the sunlight. In the 1980s, overwintering sites along the California coast would attract more than 10 million of the long distance migrators, which could be seen spraying from branches with an especially stiff gust or at the sight of a dangerous predator.

But such numbers haven’t been seen in recent decades. Scientists at Pismo Beach Monarch Butterfly Grove were alarmed last year when fewer than 200 monarchs were counted – the fewest since annual tracking of the pollinators began in 1997.

This last counting season, however, an estimated 22,000 monarchs were tallied at the grove during the 2021 Thanksgiving weekend count, according to the Pismo Beach Monarch Butterfly Grove.

Scientists who monitor monarchs year round are struggling to understand why populations have been teetering for several decades at the groves where monarchs frolic across the region.

“I wish we had a crystal ball,” said Gail Morris, coordinator of the Southwest Monarch Study in Arizona.

The Southwest Monarch Study, a nonprofit that monitors and researches the insects in Arizona, California, Nevada, New Mexico, western Colorado and Utah, consists of citizen scientists and volunteers who have discovered a great deal about the butterflies. Even still, nobody understands why monarch populations bounce so drastically, and the larger question always looms: What will the future of the species look like?

“We had a clue last spring,” Morris said. Even though the numbers at Pismo Beach were low for the annual Thanksgiving surveys, there were more butterflies reported in spring than in previous years. The Southwest Monarch Study speculates that the butterflies might be responding to the cooler weather.

“That makes them want to stay in the protection of the groves,” she said. Destruction of habitat is considered a factor in the decline. “If they can get back to clustering and things of that nature, that’s more of the winter behavior that will keep them safe. Once they leave and disperse, they are traveling on their own, and so there is safety in numbers at the groves right now.”

Monarch population counts are held over Thanksgiving weekend, when the western monarch populations have migrated to California from the western United States. This last season was successful for monarch butterflies, but their future is still uncertain.

“Some people think the temperatures were so warm last fall that perhaps they didn’t stay non-breeding during that overwintering period and they were breeding instead,” Morris said, but noted that scientists just don’t have enough information to know what caused the recent uptick. “Scientists have been working trying to scrunch the numbers and figure out how this happened with so few numbers to start.”

The information the group collected has been helpful in learning more about monarch migration and breeding patterns.

“Because we tagged monarchs with a little blue tag, we can learn how long they’re living, and a monarch that lives longer than about six weeks, very likely is non-breeding,” Morris said. “So if we have a monarch that was tagged last November and they’re still alive today, there was a period in their life when they were not breeding. Even if they’re breeding right now, there’s three to four months they were likely not breeding.”

Monarch butterflies aren’t the only insects that have irregular breeding patterns and populations. Cheryl Schultz, professor of conservation biology at Washington State University who has observed the changes in monarch populations, said other insects sometimes follow a similar trend.

According to a May 2021 article Schultz published in the Journal of Insect Conservation, butterflies in general have bounces in populations, and that fluctuation is normal for several other insect species.

“We see that in other insects in our backyard when you think about it,” she said. “Whether it’s crickets or something else, they’ll have some really good years where you see them all the time and we wish they weren’t there. And then we see these other years where they never bother us.”

With this season having an upward bounce of western monarchs, monarch advocates believe that better environmental conditions may be a cause.

“They are kind of a flagship species, for lack of a better word here,” Morris said. “They’re an indicator of what is going right and wrong in our environment. So if they are healthy and their numbers are prospering and they’re growing, that means things are going right here.”

As a wildlife monitor for the California State Parks, Ryan Slack has been surveying populations at the Pismo Beach monarch grove for more than 10 years and has seen dramatic changes.

“Inherently, they are a unique species and we want to preserve diversity as much as we can in the animal world,” Slack said. “Monarchs are pollinators, and it is really important to protect pollinators, otherwise we won’t see the flowering plants. If they are out of the picture then you lose a lot of plants that we rely on as well.”

Tracking populations have been helpful in learning about monarch butterflies, but the data only go back so far.

“There was a lot of historic data that wasn’t tracked,” Slack said. Even though the counts started in 1997, monarch populations were declining well before then. “We’ve been on this downward trend since the ’90s. We used to have over a million monarchs in their western population and the grove saw maybe a quarter of that. But over the years, it has been a pretty steady decline.”

This steady decline is due to many factors, habitat loss being one of the most prevalent issues. Officials at Pismo Beach Monarch Butterfly Grove took it into their own hands to make sure the ecosystem is the most suitable for the butterflies, including blue gem eucalyptus and Monterey cypress trees. The grove’s amphitheater-like shape was designed to create the perfect wind barrier for the butterflies while providing enough shelter and warm sunlight for them to thrive.

“They are attracted to the same microclimates in the trees and will go back to the same spots over and over again,” Slack said. “Especially for something as small as a monarch butterfly, they are really sensitive so they know what is exactly right for them in terms of wind block and finding warm little pockets of air between tree leaves. And that’s kind of why they group together as well, it helps them thermoregulate.”

Butterflies need certain temperatures to function – 32 and 59 degrees, according to the U.S. Forest Service. Although they sometimes can survive temperatures as low as 18 degrees, monarchs risk becoming paralyzed by cold, or may choose to reserve their energy for better conditions.

“What is unique is that these butterflies have not been here before,” Slack said. “This is the fifth generation from the last monarchs over here… They go through four rounds of breeding – from monarchs laying eggs to caterpillars, forming chrysalis back to monarchs – four times before they end up all the way back here. That is pretty unique in itself.”

Because it is such a popular site for overwintering monarchs, the grove has come up with its own management plan to ensure the safety of migrating monarchs.

“We have a native scrub garden that provides a lot of nectaring sources,” Slack said. “There are flowering plants that these monarchs are going to feed on. They also love nectaring on eucalyptus trees, but in general, we’re trying to provide nectaring sources while trying to keep the natural ecosystem the same as much as possible.”

Milkweed is another native plant essential for monarch butterflies. The Southwest Monarch Study used a grant from the National Fish and Wildlife Foundation to plant more than 7,000 stems of milkweed across Arizona in the past two years.

“Milkweed, as we all know, is the number one need of monarchs to lay their eggs,” Morris said. “That is their only host plant, and we are so lucky in Arizona that there’s many species of milkweed at different elevations.”

If you want to help western monarch populations, there are several ways you can help, from planting your own native, nectaring plants, to reporting and tagging butterflies.

“Look in the neighboring trees, are there some trees here for shade? Do we have it all within our neighborhoods? This is a community effort and we can do it. Other places have, and I have a lot of faith in our people,” Morris said.

Just because humans are responsible for their population decline, that doesn’t mean all hope is lost for monarch butterflies.

“We could also help them the most, you know,” Morris said. “We are encroaching on their habitat, and as a result of that, we need to be able to help all wildlife through this troubled time. We can live side by side, but we have to work at it.”

PrevPreviousOrdinary Russians are already feeling the economic pain of sanctions over Ukraine invasion
NextOpinion: To Save Ukraine, Putin Must Be the Target – Inside SourcesNext