State of the Union: Biden speech comes amid crises, setbacks 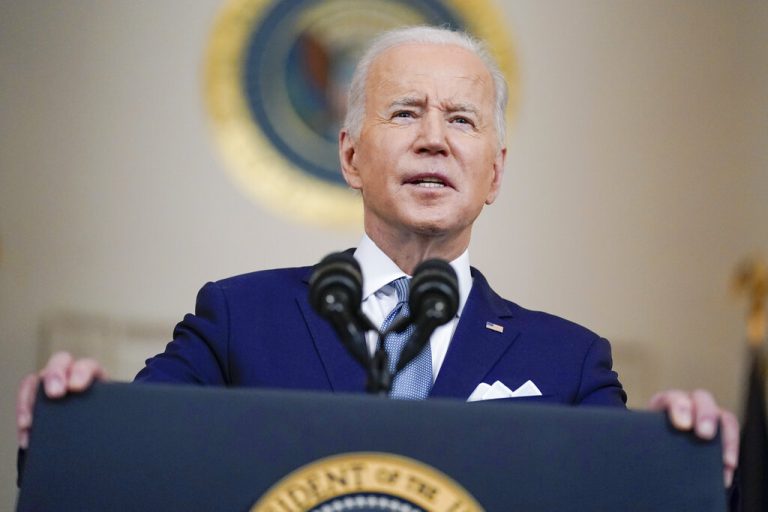 The last time President Joe Biden addressed a joint session of Congress, he said the country was “ready for takeoff” after a period of plague and strife.

It’s been a more turbulent flight than expected. Biden is scheduled to deliver his first State of the Union speech on Tuesday night at a moment when he’ has struggled to deliver on many of his original promises and as he is being forced to confront new crises.

The gap between the two major speeches — the first one was last April — is the story of a presidency that has repeatedly needed to recalibrate its ambitions.

Although Biden reached a bipartisan deal on an infrastructure plan, many of his other proposals have been jettisoned or left languishing with no clear path to becoming reality. He followed through on his pledge to remove U.S. forces from Afghanistan, but the chaotic withdrawal left the Taliban in control and a looming humanitarian disaster. Meanwhile the coronavirus evolved into new, more contagious variants that increased the pandemic’s death toll despite the widespread availability of vaccines.

And most recently, Russian President Vladimir Putin has expanded his invasion of Ukraine, plunging Europe into war and hijacking Biden’s foreign policy agenda.

“These speeches go through many, many drafts,” said Michael Waldman, president of the Brennan Center for Justice and a former chief speechwriter for President Bill Clinton. “And I would bet they’re starting some new drafts right now.”

He added: “Two weeks ago the speechwriters probably thought they knew what was in the speech. Vladimir Putin had other ideas.”

Traditionally, State of the Union speeches focus on domestic issues. But Waldman said this one is a chance for Biden to outline the stakes of the crisis in Ukraine, especially as Americans remain wary of becoming involved in foreign conflicts and worry that economic ripple effects could drive up gas prices.

“This is a really important opportunity for the president to talk about Russia’s appalling attack and to put it in the context of why it matters,” Waldman said.

Biden is preparing his speech during one of the most consequential stretches of his presidency. In addition to the expanding invasion of Ukraine, on Friday he announced Ketanji Brown Jackson as his nominee for the Supreme Court seat being vacated by Justice Stephen Breyer, who is retiring.

Jackson, a judge on the U.S. Court of Appeals for the District of Columbia Circuit, would be the first black woman to serve on the nation’s highest court if she is confirmed by the Senate. The nomination kicks off a closely watched process in the Senate, where Democrats have a slim majority.

The Centers for Disease Control and Prevention also released looser guidelines for when Americans should wear masks to limit the spread of the coronavirus. Instead of focusing on caseloads, which are harder to control because of the more transmissible omicron variant, the agency is setting benchmarks based on hospitalizations, a sign that it is shifting to a new phase of the pandemic where the virus is viewed as a more manageable threat.

Michael Beschloss, a presidential historian, said that for Biden, the State of the Union speech is “going to be one of the largest audiences he has, and it happens at the confluence of historic moments.”

“It’s one rare opportunity for a president to lift his voice above the noise,” Beschloss said. “He doesn’t have very many of those opportunities.”

Making fresh promises to American voters could be difficult when so many of Biden’s initial proposals have stalled. Some ideas were outright abandoned, such as free community college.

Others became mired in negotiations over the president’s legislative agenda, known as “Build Back Better,” when Senate Democrats were unable to reach a consensus on the plan. Limits on the cost of prescription drugs, financial incentives for fighting climate change and free preschool are among the stranded proposals.

Biden has also failed to make progress on protecting voting rights, an effort he has described as central to protecting democracy. Republicans continue to pass laws at the state level to restrict ballot access, and former President Donald Trump has refused to abandon his baseless crusade to convince Americans that the last election was fraudulent.

Sometimes presidents have used speeches to Congress to rebound after difficult periods, such as President John F. Kennedy in 1961.

Days after taking office, he outlined his goals in a major speech. But within months, his administration was embarrassed by the botched Bay of Pigs invasion in Cuba, and Americans were discouraged by the Soviet Union’s successful mission to send a cosmonaut into orbit.

So Kennedy swiftly returned to Congress to deliver another speech, where he famously pledged to put a man on the moon.

“That was a very specific effort to turn the page,” Beschloss said.

He said Kennedy hoped “it would give a second wind to his administration, which it did.”

PrevPreviousFleeing to the border: Over 150,000 Ukrainians seek refuge
NextOpinion: There Will Be More Bad Cops – Jared TaylorNext